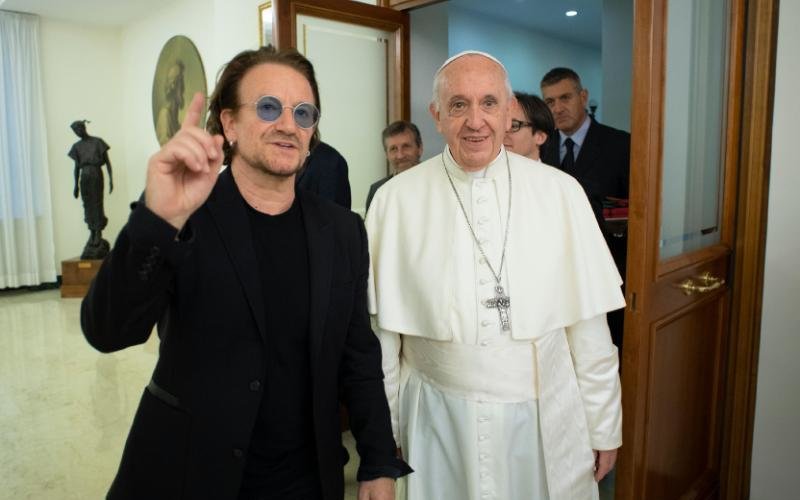 After their half-hour meeting at the Casa Santa Marta, the hotel in which Pope Francis lives, multimillionaire Bono (Paul David Hewson) of U2 said that he and the Holy Father had discussed the “wild beast that is capitalism” and the clerical sexual abuse crisis.

The rock star told reporters that he had mentioned to the pope that to some it looks like “the abusers are being more protected than the victims.” In response, the Holy Father looked sad.

“You can see the pain in his face, and I felt he was sincere,” Bono said. “I think he’s an extraordinary man for extraordinary times.”

Also present at the meeting was the José María del Corral, the Argentinian president of Scholas Occurrentes, a charity for young people. Scholas Occurrentes began as a charity called Escuela de Vecinos (“School of Neighbors”) in Buenos Aires when then-Cardinal Jorge Bergoglio was Archbishop. Today it is an inter-religious papal foundation.

READ: U2 comes out as pro-abortion, urges repeal of Ireland’s pro-life law

According to its website, Scholas Occurentes is dedicated to generating “a paradigm shift in education through the integration of educational communities with a focus on low-income by the commitment” and “relying on technology to design [a] global classroom with the complementation of art and sport, thus recovering the educational pact to realize an integrated and peaceful society.”

Scholas Occurentes, which works with “partner networks” in 190 countries, has Argentinian Bishop Marcelo Sánchez Sorondo as its vice-president.

Bono said that he has a “crush” on the papal foundation.

According to Vatican Insider, Bono said that he was “intrigued’ by Scholas Occcurentes and is contemplating a partnership between the charity and his own international advocacy organization One.

“We haven't figured out what we’re going to do together, we just sort of have a crush on each other,” the musician said.

Bono and his U2 bandmates were among the Irish celebrities who advocated a repeal of the pro-life Eighth Amendment to the Irish Constitution. On May 1, 2018, the band divided their fans by tweeting a heart-shaped graphic reading “Repeal the 8th” and encouraging Twitter readers to vote for abortion in the upcoming referendum.

The star’s visit to Pope Francis took place as the pontiff is undergoes unprecedented scrutiny, both because of still unanswered allegations he knowingly protected and promoted the interests of a sexually abusive and promiscuous cardinal and because of his role in defending a clerical sex offender in Argentina.

The attempts of Argentinian victims of clerical sexual abuse to meet with Pope Francis have been unsuccessful.