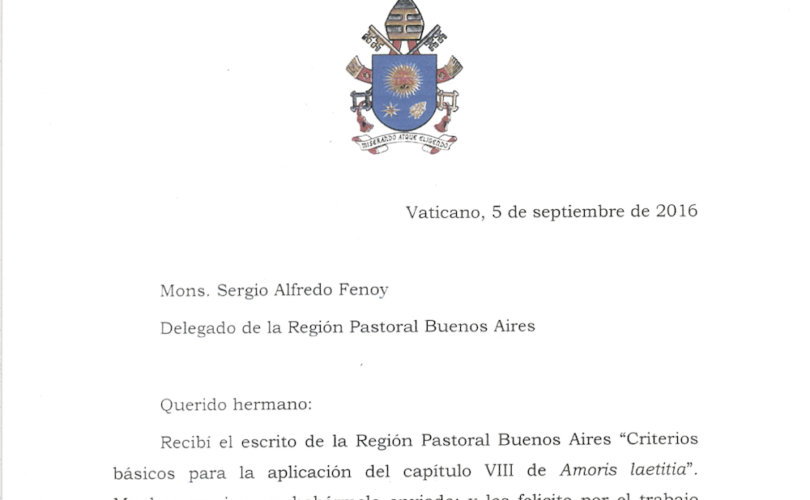 Update: See our follow-up stories:
* Vatican Radio confirms Pope’s leaked letter on Amoris Laetitia as authentic
* Why all the fuss over allowing Communion for the remarried in just the hardest of cases?

Editor's Note: There have been slight corrections to our original translation of one paragraph of the Pope's letter. The 10th paragraph below, starting with “Pope Francis adds…”, is now fully accurate.

September 9, 2016 (LifeSiteNews) — In a letter reportedly leaked by a priest in Argentina, Pope Francis writes that there is “no other interpretation” of Amoris Laetitia other than one admitting divorced and remarried Catholics to Holy Communion in some cases. The letter, dated September 5, comes in response to a confidential document by the bishops of the Buenos Aires pastoral region to priests instructing them on the application of the Pope’s controversial apostolic exhortation. LifeSite has acquired copies of both original documents and has provided professional side-by-side translation.

The Spanish original of the letter from the Pope is here.

The Spanish original of the bishops’ directive is here.

LifeSiteNews’ translation of the Pope’s letter is here.

LifeSiteNews’ translation of the bishops’ directive is here.

The story was first published yesterday by the Spanish-language Catholic news service InfoCatolica and an anonymous Argentinean Catholic blogger whose blog is known as “The Wanderer.” The blogger has published photostatic copies of the original documents, and LifeSite has been informed that the blogger’s source is a priest in Buenos Aires. After consulting with sources, LifeSite believes that the blogger is trustworthy and that the copies of the letters are authentic.

The document by the bishops of the pastoral region of Buenos Aires interprets for priests in the region the 8th chapter of Amoris Laetitia on how to deal with couples who are remarried after divorces but have not been granted annulments. It follows closely the language of the most controversial parts of the papal exhortation including the infamous footnote 351, which opens the door to what Cardinal Raymond Burke and other faithful bishops have called “sacrilege.”

The bishops’ directive called “Basic Criteria for the Application of Chapter Eight of Amoris Laetitia” says that in “complex circumstances” when the remarried couple could not “obtain a declaration of nullity,” the priests can nevertheless move forward to grant them access to Holy Communion. If the priest recognizes that “in a particular case there are limitations that diminish responsibility and culpability (cf. 301-302), particularly when a person judges that he would fall into a subsequent fault by damaging the children of the new union,” says the directive, “Amoris Laetitia opens the possibility of access to the sacraments of Reconciliation and the Eucharist (cf. notes 336 and 351).”

The Pope’s letter affirms this path with effusive praise for the bishops’ work. Writing to the delegate of the Buenos Aires Pastoral Region, Monsignor Sergío Alfredo Fenoy, the Pope says, “I thank you for the work they have done on this: a true example of accompaniment for the priests.”

Pope Francis adds: “The document is very good and completely explains the meaning of chapter VIII of Amoris Laetitia. There are no other interpretations. And I am certain that it will do much good. May the Lord reward this effort of pastoral charity.”

The blogger who published the documents writes that the priests of the diocese met Thursday to discuss the matter. At the meeting, some priests were openly critical of both the bishops’ directive and the Pope’s document. The blogger adds that Cardinal Mario Poli was present at the meeting with a canon lawyer and that both contradicted the bishops’ directive, “clarifying that the Eucharist can only be received by those divorced and remarried who live together as brother and sister, maintaining chastity.”

The leaked document is the first time there is explicit confirmation that Pope Francis interprets Amoris Laetitia as allowing communion for divorced and remarried Catholics without the condition that the couple in the irregular situation live as brother and sister without sexual relations, as was always required by the Church.

Neither the Vatican spokesman nor the chancery office of Buenos Aires were available for comment on this story.