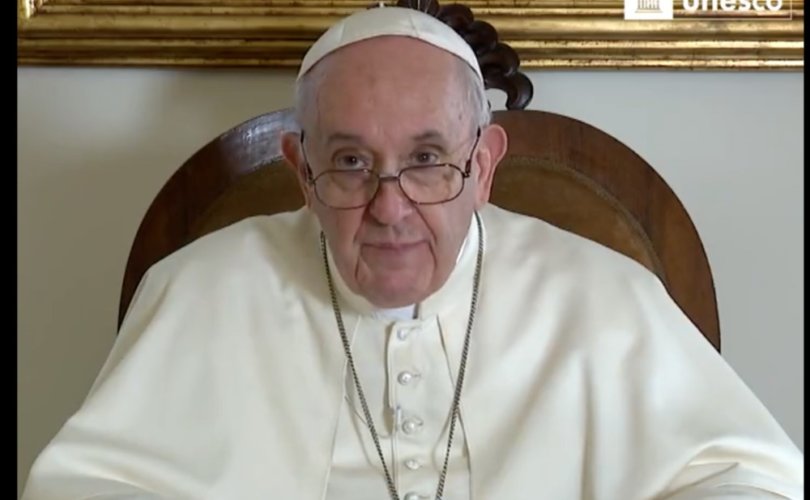 VATICAN CITY (LifeSiteNews) – In a video message Friday, Pope Francis warmly praised the pro-abortion United Nations agency UNESCO, saying the agency was a “privileged partner of the Holy See in the common service to peace and solidarity among peoples.”

The Pope delivered his message as a video recording played November 12 at the 75th anniversary conference of the United Nations Educational, Scientific and Cultural Organization (UNESCO).

We vow to continue our work in promoting peace, nurturing solidarity and protecting the cultural heritage of humanity.https://t.co/jfk2LjIt0P #unesco75 #OurWorldOurHumanity pic.twitter.com/SSLmWz1Tpf

Stating how “from my heart I express my congratulations on the seventy-fifth anniversary of this United Nations Agency,” the Pope’s brief message focused on the relation the Church has with the U.N. agency.

“The Church has a privileged relationship with it,” he said.

“Indeed, the Church is at the service of the Gospel, and the Gospel is the most humanising message known to history. A message of life, freedom and hope, which has inspired countless educational initiatives in every age and in every place, and has inspired the scientific and cultural growth of the human family.”

Such a commitment to “life, freedom, and hope” was seemingly to be found in UNESCO, hinted the Pope, as he added that “this is why the United Nations Educational, Scientific and Cultural Organisation is a privileged partner of the Holy See in the common service to peace and solidarity among peoples, to the integral development of the human person and to the protection of the cultural heritage of humanity.”

“Best wishes to UNESCO! Best wishes! May God bless you, and all the best in your work! Thank you!”

UNESCO responded by tweeting that it was “honored to have received a message from his holiness,” and would continue “promoting peace, nurturing solidarity and protecting the cultural heritage of humanity.

The Pontifical Academy for Life also highlighted the Pope’s message to the U.N. agency.

As an organization, UNESCO has a history of being firmly pro-abortion, pro-LGBT and pro-transgender.

In 2014, UNESCO said an important part of educating children was teaching them to know how and where to obtain abortions and to be tolerant of homosexual behavior. “Specific policy measures” are needed to ensure that children “learn in school the importance of tolerance,” UNESCO claimed.

Then in 2016, UNESCO released a 60-page report saying children should receive “non-judgmental and accurate information on sexual orientation and gender identity/expression.” The report called for this to be done “through information campaigns and partnerships with civil society and the wider school community.”

The radically pro-LGBT agenda included teaching five-year-olds to “describe” families composed of lesbians or homosexuals, and to “express respect” for homosexual parenting.

More recently, the Ghana Catholic Bishops’ Conference protested against the implementation of UNESCO’s Comprehensive Sexuality Education (CSE) to the country’s schools, saying it was “a subtle way to introduce this gay and lesbian thing to our children.”

The international organization Stop CSE campaigns against CSE programs, saying they “seek to change society by changing sexual and gender norms and teaching youth to advocate for their sexual rights. Most CSE programs promote acceptance of diverse sexual identities and orientations and have an almost obsessive focus on sexual pleasure, instructing children and youth at the earliest ages on how to obtain sexual pleasure in a variety of ways.”

Stop CSE also noted how such education was promoted at the U.N. by prominent abortion provider, International Planned Parenthood.

President Donald Trump pulled the United States out of UNESCO in 2017, citing concerns over “mounting arrears at UNESCO, the need for fundamental reform in the organization, and continuing anti-Israel bias at UNESCO.”

That same year, Audrey Azoulay, a left-wing politician and promoter of gender equality, was promoted to Director General of UNESCO. Azoulay was recently overwhelmingly re-elected to serve another four-year term as head of the pro-abortion agency.