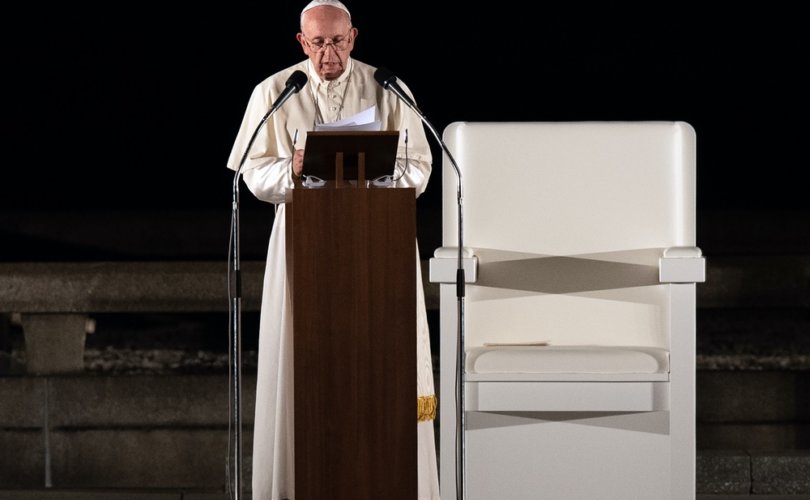 September 15, 2020 (LifeSiteNews) – Pope Francis received 14 French ecological activists from widely different horizons on September 3, in a bid to show that the Catholic faith is not a prerequisite for commitment in favor of “Our Common Home.” Days after launching the World Day for Creation and calling for a “Jubilee for the Planet,” the Pope once more focused on Amazonia and the “wisdom” of its indigenous cultures, in an impromptu address from which the words “God,” “Jesus,” and “Christ” were totally absent.

Instead, Pope Francis promoted “ecological conversion,” speaking of his own awakening to the needs of the planet since the Aparecida meeting of Latin American bishops in 2007.

Seen from France the event was a curious one. It was a motley group that assembled in the reception room of Santa Marta for a private audience with Pope Francis, together with the president of the French Bishops’ conference, Eric de Moulins-Beaufort.

All the guests are known activists, often left-wing. They ranged from actress Juliette Binoche, who supports the “fight” of Polish women for legal abortion and who has played lesbian “love” scenes in her films, to Audrey Pulvar, a journalist and politician, and a former socialist minister’s concubine who is presently one of the deputy-mayors to Anne Hidalgo, the socialist pro-abortion and pro-LGBT mayor of Paris. Pulvar herself is a self-proclaimed feminist and abortion supporter who also created an endowment fund, African Pattern, for the financing of the “ecological transition” in Africa. The fund has yet to take concrete action.

Other visitors included Valérie Cabanes, a lawyer who lobbies for the recognition of “ecocide,” or crimes against nature, and who wants nature to be considered as a subject of rights in international law, and Maxime de Rostolan, an “ecological entrepreneur” who does not believe in economic growth.

The most peculiar figure of the group was surely Pablo Servigne, with his “theory of collapse” and “learning to live with catastrophes” while understanding that “everything is connected” and that man should “form alliances with [creatures] ‘other than humans’.” Servigne founded a magazine named Yggdrasil which in Nordic mythology is the cosmic tree in which the cosmos always renews itself in never-ending cycles of nature. He suggests that all should embark upon an “initiatory voyage” in order to find “the being that vibrates in everyone,” calling it back to life “thanks to other living beings.”

The group went from Paris to Rome by train and bus to lessen its “carbon footprint” and so that its members could get to know each other.

Once in the presence of Pope Francis they were surprised to find that the Pope decided not to read his prepared speech (which included mentions of religious truths and a quote from Pope John Paul II: “Not only has God given the earth to man, who must use it with respect for the original good purpose for which it was given to him, but man too is God’s gift to man. He must therefore respect the natural and moral structure with which he has been endowed.”)

Pope Francis told his guests that they would get the official text but that he preferred to “speak spontaneously.”

“I would like to begin with a piece of history. In 2007 the Conference of the Latin American Episcopate took place in Brazil, in Aparecida. I was in the group of drafters of the final document, and proposals arrived regarding Amazonia. I said, ‘But these Brazilians, how they go on about Amazonia! What has Amazonia got to do with evangelization?’ This was me in 2007. Then, in 2015, Laudato Si’ was published. I had a journey of conversion, of comprehension of the ecological problem. Before then I didn’t understand anything!” Pope Francis confided to the group.

The language of “conversion” is usually related to conversion to God by renouncing sin, evil, and error. In this event, Pope Francis clearly suggested that his “journey of conversion,” a process of becoming aware of the needs of nature and turning toward the material creation as a good that must determine action, was a sort of religious itinerary.

He also recounted that he accelerated the publication of Laudato si’ in view of the Paris Climate Conference (COP 21) in 2015 at the request of Ségolène Royal, former concubine of president François Hollande and then minister for the Environment.

“I called the team that was doing it – because you know that this was not written by my own hand, it was a team of scientists, a team of theologians, and all together we carried out this reflection – I called this team and I said, ‘This must come out before the Paris meeting’ – ‘But why?’ — ‘To apply pressure.’ From Aparecida to Laudato Si’ was, for me, an inner journey,” said Pope Francis.

How true is this? In 2007, Pope Francis was easily elected to preside the drafting committee responsible for the redaction and publication of the “Aparecida” document, which prolonged and amplified the ecological foundations laid in Medellin in 1968 (with its liberation theology orientations) and Puebla in 1979.

Many of the themes that were brought to the fore in the Amazon Synod were present in the Aparecida document and its pressure in favor of “overcoming anthropocentric exaggeration” and adopting “a vision that contemplates the human being in relation to other creatures and the biosphere.”

The expression “Common Home” was also present in the document, together with pleading for “Our sister mother Earth.”

It was also the Aparecida document that made expressions such as “living in communion with nature” mainstream in the Catholic Church; it spoke of the “riches of peoples and cultures” in the Amazon, praising their “traditional knowledge of natural resources.”

In the same way as the Amazon Synod, it presented the Amazon as first and foremost a “pluri-ethnic, pluri-cultural[,] and pluri-religious” region where “traditional peoples seek to see their territories recognized and made legal,” and where local churches must promote a common “pastoral care” for the whole Amazon basin – as was decided at the close of the Amazon Synod. This “pastoral care” would not aim for the spiritual well-being and salvation of souls but would promote “a development model that puts the poor first.”

Is it possible that Pope Francis actually did not “understand anything” of this text whose final draft he was responsible for? What is certainly true is that he now wants “everyone” to “undertake this journey of ecological conversion.”

When I went to Amazonia, I met many people there. I went to Puerto Maldonado, in Peruvian Amazonia. I spoke with the people, with many different indigenous cultures. Then I lunched with 14 of their chiefs, all of them with feathers, in traditional costume. They spoke a language of wisdom and of the highest intelligence. Not just intelligence, but wisdom. And then I asked, “And you, what do you do?” – “I am a university professor.” An indigenous person who wore feathers there, but went to university in “civilian” clothing. “And you, Ma’am?” – “I represent the Ministry of Education for this entire region.” And it was like this, one after the other. And then a girl: “I am a student of political science.” And here I saw it was necessary to eliminate the image of indigenous peoples whom we imagine only with arrows.

But it would seem these people who live in a modern way, with modern jobs and the comforts that go with them, wanted to be seen as living as in pre-colonial times, eliminating the image of development that came to them from Christian Europe.

The Pope continued: “I discovered, side by side with them, the wisdom of the indigenous peoples, and also the wisdom of ‘good living,’ as they call it. ‘Good living’ is not the ‘dolce vita,’ the easy life, no. Good living is living in harmony with creation. And we have lost this wisdom of good living. The original peoples bring us this open door.”

“Good living,” to the indigenous peoples of the Amazon, means living in harmony with oneself, others, nature, the supreme being because of the “intercommunication within the cosmos,” as the Instrumentum Laboris of the Amazon Synod explained. It is in fact the “sumac kawsay” of the Amazonian aboriginals or call of the ancestral teachings of the indigenous tribes. According to the communist magazine Contretemps in France, Ecuadorian and Bolivian revivals of the “Buen vivir” are in fact a “cultural criticism of capitalism.” It rejects Western civilization but was built with the contribution of Western Marxist, anarchist, feminist, and ecologist thought, according to the same study.

This “holistic” approach can be dangerous when it opposes a so-called doctrinal Church to one of empathy that goes along with the signs of the times. Surely the Enlightenment was profoundly revolutionary, but it arose from a rejection of dogma and the revealed truths of the Catholic faith – a faith that requires men to govern their feelings and passions by their intelligence and to be tuned to what is good.