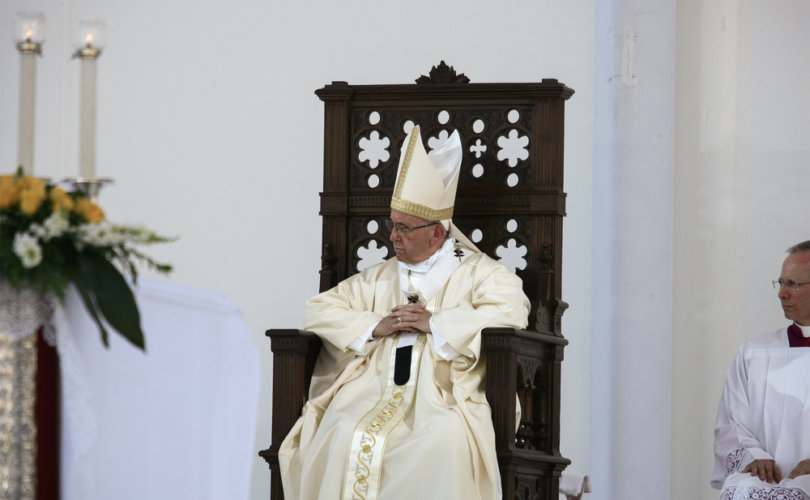 VATICAN CITY, October 23, 2017 (LifeSiteNews) — Pope Francis on Sunday issued a public correction of Cardinal Robert Sarah, Prefect of the Congregation for Divine Worship and the Discipline of the Sacraments, for seeking to rein in the Pope’s new liturgical decentralization.

The Pope’s public rebuke of the cardinal came after he issued a commentary note in the French Catholic journal L’Homme Nouveau, stating that Pope Francis’ new motu proprio, Magnum Principium, does not substantially alter the authority of the Holy See over liturgical translations.

In the letter dated October 15 addressed to Sarah, Pope Francis instead makes clear that key provisions of John Paul II’s Liturgiam authenticam (on the use of the vernacular in liturgical books of the Roman Rite) have been “abrogated.”

The Pope also plainly states he is shifting responsibility for judging a translation’s fidelity to the Latin away from Rome to the local bishops’ conferences. “Judgement of the fidelity to the Latin and any needed corrections was the task of the Dicastery,” he writes, “while now the norm grants to the Episcopal Conferences the faculty of judging the quality and consistency of each in the translations from the original, although in dialogue with the Holy See.”

The confirmatio granted by the Holy See no longer presupposes, therefore, “a detailed word by word examination,” except in certain cases that may be presented to the Bishops for their further reflection, the Pope states.

On September 3, 2017 Pope Francis issued the document Magnum Principium which changes the rules for liturgical translation into vernacular languages in the Roman Rite. This document transfers the power of initiative in making such translations from the Congregation for Divine Worship in Rome to episcopal conferences but leaves ambiguous how extensive Rome’s power of review may remain.

Over the last month Cardinal Sarah has sought to prevent the Pope’s new rules delegating translation to episcopal conferences from becoming the basis for a new anarchy in the liturgy.

Key to this effort has been the 2001 document Liturgiam authenticam which requires that vernacular translations of the liturgy actually be translations rather than mere tendentious paraphrases (as the 1970s English text were widely held to be).

Cardinal Sarah had insisted that Liturgiam authenticam remain the basis for new translations proposed by Bishops conferences. Pope Francis has now publicly rebuked him for this approach.

Sources close to the Vatican say that such a public rebuke of Cardinal Sarah, and the abrogation of key principles of Liturgiam authenticam, appear to place Pope emeritus Benedict XVI and Pope Francis on opposing sides of the issue.

In April 2012, Pope Benedict sought to impose Liturgiam authenticam on the German Bishops’ Conference, especially as regards the correct translation of “pro multis” in the consecration of the Mass, but the German bishops firmly resisted.

The public correction also comes after Cardinal Reinhard Marx, president of the German bishops’ conference, welcomed Magnum Principium, and implied that it was a clear break with the 2001 document Liturgiam authenticam, which he called a “dead end.”

In recent months, the pope emeritus also wrote a preface to Sarah’s book to bolster him, saying: “With Cardinal Sarah … the liturgy is in good hands.”

A mystery still remains regarding the Pope’s letter to Cardinal Sarah.

In the final paragraph of the letter, Pope Francis says Cardinal Sarah’s commentary was “published on several websites, and wrongly attributed to your person” and yet the cardinal’s byline is clearly on the piece published by L’Homme Nouveau.

We contacted the Director of the Holy See Press Office, Greg Burke, to clarify what the Pope meant, but received no response.

Here below is a LifeSite translation of the Pope’s letter to Cardinal Sarah. A pdf of the original letter, courtesy of La Nuova Bussola, is available here.

I have received your letter of September 30, with which you graciously wished to express to me your gratitude for the publication of the Motu Proprio Magnum Principium, and to send me an explanatory note, or “Commentaire,” aimed at providing a better understanding of this text.

In offering my sincere gratitude for your efforts and contribution, I would like to express simply, and I hope clearly, several observations regarding the abovementioned note which I believe are important especially for the application and proper understanding of the Motu Proprio, and to avoid any misunderstanding.

First, it is necessary to highlight the importance of the clear difference the new MP establishes between recognitio and confirmation, laid down in §§ 2 and 3 of can. 838, to abrogate the practices adopted by the Dicastery following  Liturgiam authenticam (LA) and which the new Motu Proprio wished to modify. One cannot say therefore that recognitio and confirmatio are “strictly synonymous (or) are interchangeable” or “are interchangeable with respect to the responsibility of the Holy See.”

In fact, the new can. 838, through the distinction between recognitio and confirmatio, asserts the various responsibilities of the Holy See in the exercise of these two actions, as well as that of the Episcopal Conferences. Magnum Principium no longer holds that translations must conform on all points to the norms of Liturgiam authenticam, as was done in the past. That is why the individual numbers of LA must be carefully re-understood, including nn. 79-84, so as to distinguish what is being asked by the code for the translation and what is required for legitimate adaptations. It is therefore clear that several numbers of LA have been abrogated or are no longer in force, being replaced by the terms in which they were reformulated by the new canon of the MP (e.g. n. 76 and also n. 80).

Regarding the responsibility of Episcopal Conferences to translate “fideliter,” [faithfully] it should be clarified that judgement of the fidelity to the Latin and any needed corrections was the task of the Dicastery, while now the norm grants to the Episcopal Conferences the faculty of judging the quality and consistency of each in the translations from the original, although in dialogue with the Holy See. The confirmatio no longer presupposes, therefore, a detailed word by word examination, except in obvious cases that may be presented to the Bishops for their further reflection. This applies in particular to the relevant formulae, such as the Eucharistic Prayers and especially the Sacramental formulae approved by the Holy Father. The confirmatio also takes into account the integrity of the book, i.e. it verifies that all of the parts that make up the editio typica have been translated.[1]

Here we can add that, in light of the MP, the “fideliter” of § 3 of the canon implies a triple fidelity: to the original text in primis; to the particular language into which it is translated and, lastly, to the comprehension of the text by the recipients (cf. Institutio Generalis Missalis Romani nn. 391- 392).

In this sense the recognitio indicates only the verification and protection of conformity to the law and the communion of the Church. The process of translating major liturgical texts (e.g. Sacramental formulae, the Creed, the Pater noster) into a language — from which they are considered authentic translations — should not lead to a spirit of “imposition” on the Episcopal Conferences of a given translation done by the Dicastery, since this would violate the right of the Bishops laid down in the canon and formerly by SC 36 § 4. Moreover, one should keep in mind the analogy with can. 825 § 1 regarding the version of Sacred Scripture, which does not require the confirmatio by the Holy See.

It is incorrect to attribute to the confirmatio the aim of the recognitio (i.e., “to protect and ensure conformity to the law”). Of course, the confirmatio is not a merely formal act but is necessary for the edition of the “translated” liturgical book: it is granted after the version has been submitted to the Holy See for the ratification of the Bishops’ approval, in a spirit of dialogue and assistance in reflecting if and when necessary, respecting rights and duties, keeping in mind the legality of the process followed, and its procedures.[2]

Lastly, your Eminence, I reiterate my fraternal gratitude for your efforts and noticing that the “Commentaire” note was published on several websites, and wrongly attributed to your person, I ask you kindly to see to disseminating this, my response, on the same sites, and to sending it to all Episcopal Conferences, and to the Members and Consultors of this Dicastery.

And in asking for your prayers, I assure you of my own for you!

[1] Magnum principium: The goal of the translation of liturgical texts and of biblical texts for the Liturgy of the Word is to announce the word of salvation to the faithful in obedience to the faith and to express the prayer of the Church to the Lord. For this purpose, it is necessary to communicate to a given people using its own language all that the Church intended to communicate to other people through the Latin language. While fidelity cannot always be judged by individual words but must be sought in the context of the whole communicative act and according to its literary genre, nevertheless some particular terms must also be considered in the context of the entire Catholic faith because each translation of texts must be congruent with sound doctrine.”

[2] Magnum principium: Without doubt, attention must be paid to the benefit and good of the faithful, nor must the right and duty of Episcopal Conferences be forgotten who, together with Episcopal Conferences from regions sharing the same language and with the Apostolic See, must ensure and establish that, while the character of each language is safeguarded, the sense of the original text is fully and faithfully rendered and that even after adaptations the translated liturgical books always illuminate the unity of the Roman Rite.