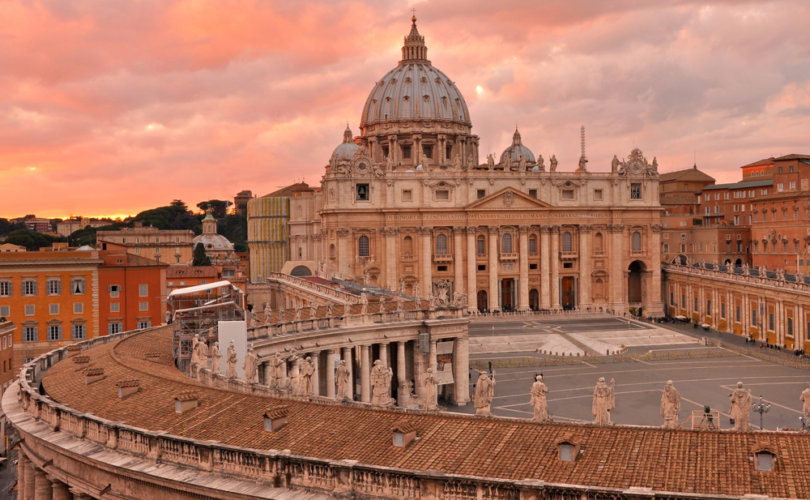 ROME, January 28, 2015 (LifeSiteNews.com) – Pope Francis granted an audience on Saturday to two women the world’s press are dubbing a “transsexual man and his fiancée.”

The woman, now called Diego Neria Lejarraga, told Spanish media that the pope had surprised her by calling her twice out of the blue in December, the second time on Christmas eve, after she had complained to the media that her local parish priest had called her a “daughter of the devil.” Neria had written to Francis complaining of rejection from the local parish after she had undergone “gender reassignment.”

“Never before have I had dared, but with the Pope Francis, after hearing him in many interventions, I felt that he would listen to me,” Neria told the Spanish language paper Hoy.

“The first call was already much more than I had expected,” Lejarraga told Hoy.

“By the second I still couldn’t believe what was happening to me, because I know that my case is nothing. There are so many people suffering in this world who do not deserve the attention of the Pope.” Neria said that it was Pope Francis who asked for the meeting, telling her that he would make the arrangement and call her back.

Francis welcomed the two into his private suite at Domus Santa Marta to a “strictly private meeting.” Hoy’s interviewer, Ana B. Hernandez, speculated that it is a signal that “Pope Francis may also change the reality of [Catholic] people who have decided or decide, as did Diego, reassign their gender.”

Catholic teaching, however, considers gender “reassignment” an impossibility and a violation of the Creator’s intention.

Pope Francis himself has criticized fluid notions of gender. During his in-air interview on January 19, the pope called the imposition of “gender theory” a form of “ideological colonization.”

“Indeed, gender ideology is the destruction of persons, which is why Pope Francis was justified in calling it demonic,” wrote Bishop Laun. “The core thesis of this sick product of reason is the end result of a radical feminism which the homosexual lobby has made its own.”

In her letter, Neria had specifically noted that she felt excluded from the Church because of her decision, and that she was now “afraid” to receive Communion. She did not tell Hoy what the pope said, only mentioning that he embraced her.

The move has received plaudits from homosexualist activists who have worked for decades to undermine Catholic teaching on sexuality. Marianne Duddy-Burke, executive director of Dignity USA, who told the Washington Blade, a homosexual newspaper, the meeting was “a very significant event.”

“For the pope to meet with a transgender man about to be married, and for that meeting to result in this man feeling more hopeful about his place in the Church, shows a concern for those at the very margins of our church,” Duddy-Burke said. “I hope the pope listened carefully to this man’s experience, and will speak about what he heard.”

This follows a sharp rebuke from Dignity USA, saying the homosexualist movement was “disturbed and disappointed” at Pope Francis’s comments in Manila on the sanctity of marriage and the Church’s teaching on the immorality of contraception.

“Especially in light of the more welcoming and sensitive tone on LGBT issues that the Pope has taken over the past two years, it is disconcerting to hear a phrase that is a hallmark of extreme right-wing religious leaders and politicians coming from the leader of the Catholic Church,” the group said.

To the gathering in Manila, Pope Francis said the family is threatened “by growing efforts on the part of some to redefine the very institution of marriage, by relativism, by the culture of the ephemeral, by a lack of openness to life.”

“Every threat to the family is a threat to society itself,” he added.

The Washington Blade also quoted the director of Human Rights Campaign’s Latino and Catholic Initiatives, Lisbeth Meléndez Rivera, who said, “This is the kind of pastoral care and inclusion of the margins we know the church is capable of.”

Thus far, no clarification or comment on the meeting has come from the Vatican, despite the news being widely picked up by the world’s secular media.

Pope Francis continues to please homosexualists, despite his intermittent reiterations of Catholic moral teaching, a pattern that the Advocate called a “mixed record when it comes to LGBT people. Many have hailed him for shifting the Catholic Church’s tone when it comes to LGBT issues. At the same time, he’s garnered criticism for a lack of policy changes.”

In 2013, the Advocate named the pope as its “Person of the Year,” mainly in response to his comments in various interviews, including the now-infamous “who am I to judge” remark on the way home from Brazil. But in December 2013, the Advocate’s Parker Marie Molloy, a man who claims to be a “trans woman,” complained that the pope had “not made good” on what the gender ideologues considered his promise on “transgender” issues.

But he still compared Francis favorably to Pope Benedict XVI, who was at pains to publicly identify and oppose the gender ideology that upholds the existence of the “transgender” phenomenon as a major platform plank. Molloy quotes Benedict for contrast, noting his statement in a homily in 2012 that under the new “gender” philosophy, “sex is no longer a given element of nature, that man has to accept and personally make sense of.”

Now, Benedict said, “it is a social role that we choose for ourselves, while in the past it was chosen for us by society. The profound falsehood of this theory and of the anthropological revolution contained within it is obvious.”

“Pope Francis has not yet enacted any change to church doctrine. The man has made the covers of The Advocate, Time magazine, and the New Yorker for having changed the tone of the church, while the content underneath that tone remains largely the same,” Molloy wrote.

Gender identity disorder in children: will Jack be happier if we all pretend he’s Jill?