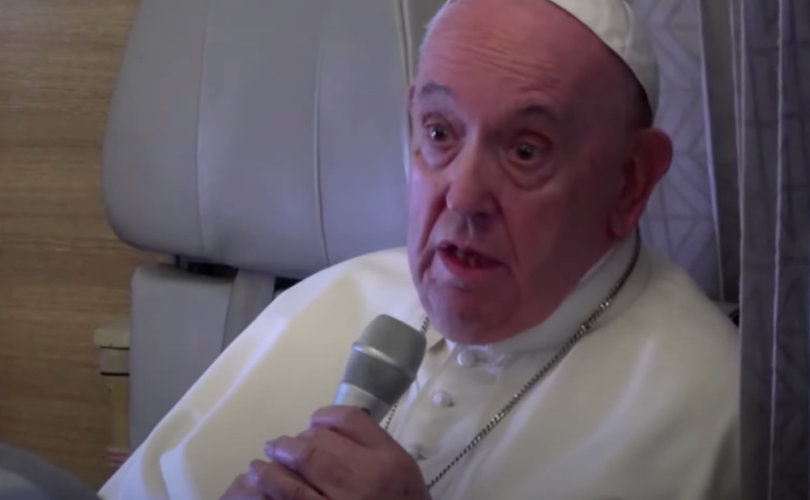 (LifeSiteNews) – Pope Francis has described Communist China as “not undemocratic” and refused to support Hong Kong’s Cardinal Joseph Zen as he prepares to go on trial in the country on September 19.

Speaking to reporters on board the papal plane from Kazakhstan to come on Thursday, Pope Francis fielded questions about China and the Vatican’s relation with the Communist state.

“To understand China takes a century, and we do not live for a century,” he said vaguely. He described the Chinese mentality as “a rich mentality, and when it gets a little sick, it loses its richness; it is capable of making mistakes. In order to understand we have chosen the path of dialogue, open to dialogue.”

Referencing the Vatican’s controversial deal with China, Francis said it was “going well, slowly, because the Chinese pace is slow, they have an eternity to go forward: they are a people of endless patience.”

Without mentioning any specifics of the deal, the Pope added how “it is not easy to understand the Chinese mentality, but it should be respected, I always respect this.”

Francis praised Vatican Secretary of State Cardinal Pietro Parolin for his role in chairing the “dialogue commission” with Chinese authorities – a process that “is going well,” he said, lauding Parolin’s purported knowledge of China. “It is a slow process, but steps forward are always being made.”

When asked whether he considered the trial against Cardinal Zen a “violation of religious freedom,” Francis appeared to suggest that the trial was not unexpected.

“Qualifying China as undemocratic, I do not identify with that, because it’s such a complex country … yes, it is true that there are things that seem undemocratic to us, that is true. Cardinal Zen is going to trial these days, I think. And he says what he feels, and you can see that there are limitations there.”

Francis ended his comments with a confusing phrase, committing himself only to supporting “dialogue” rather than the cardinal. “More than qualifying, because it is difficult, and I do wish to qualify, they are impressions, and I try to support the path of dialogue.”

Cardinal Zen, the emeritus bishop of Hong Kong, was arrested in May under the terms of the draconian 2020 national security law. He was taken into police custody along with four other trustees of the 612 Humanitarian Relief Fund. The Fund was established to offer “legal, medical, psychological and emergency financial assistance” to those involved in the 2019 protests against the government’s Extradition Law Amendment Bill, which would allow prisoners to be transferred to China for trial.

Cardinal Zen’s arrest sparked outrage across the world among political leaders, China experts, and faithful Catholics. However, the Vatican was notably silent at first, only issuing a subdued statement long after others had issued far more forthright expressions of outrage.

Meanwhile Cardinal Parolin downplayed suggestions that Zen’s arrest would impede the renewal of the secretive deal the Vatican has made with China. Parolin instead voiced his hope that “initiatives such as this one will not complicate the already complex and not simple path of dialogue between the Holy See and the Church in China.”

The Vatican’s secretive deal with China was first established in 2018 and later renewed in 2020. It is up for renewal again this fall, and though still secret, it allegedly recognizes the state-approved church and allows the Chinese Communist Party to appoint bishops. The Pope apparently maintains a veto power although in practice it is the CCP who have control. It also allegedly allows for the removal of legitimate bishops to be replaced by CCP approved bishops.

China too busy for Pope Francis

Of note, even though Chinese President Xi Jinping was in Kazakhstan at the same time as Pope Francis this week, Xi refused to meet the Pope, citing a lack of time.

Reuters reported that a “Vatican source” revealed the Vatican had made “an expression of availability” towards the Chinese, who “appreciated the gesture,” but turned down the offer for Francis and Xi to meet.

But Benedict Rogers, co-founder and chief executive of Hong Kong Watch, suggested the snub was a display of power from Beijing.

That #China #CCP #XiJinping refused to meet @Pontifex, despite the Vatican’s kowtowing & silence on #UyghurGenocide, #Tibet, dismantling of #HongKong‘s freedoms, should tell the Vatican everything about the dangers & futility of its current approachhttps://t.co/6zVaAMAiql