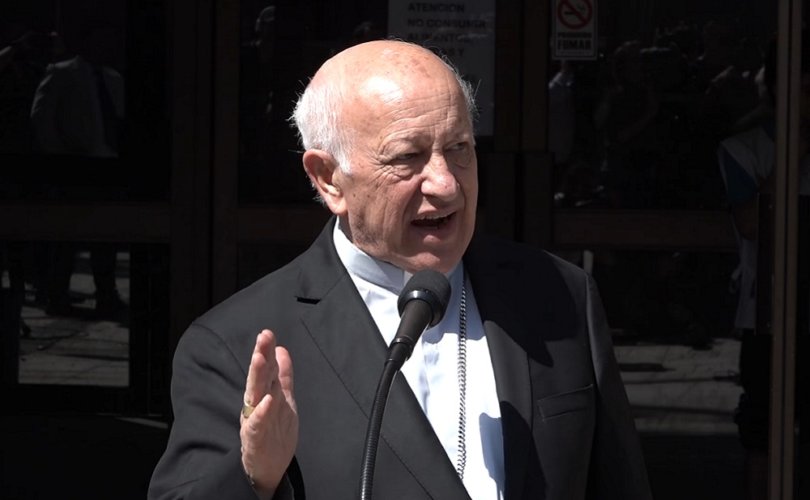 VATICAN CITY, March 26, 2019 (LifeSiteNews) ― Pope Francis has accepted the resignation of one Chilean bishop accused of covering up clerical sexual abuse only to pass on his responsibilities to another bishop blamed for mishandling complaints.

On Saturday, March 23, Pope Francis accepted the resignation of Ricardo Ezzati Andrello, cardinal archbishop of Santiago, Chile. At 77, Cardinal Ezzati is over the customary age at which bishops first offer to resign. But he has also been implicated in a cover-up of abuse committed by Fr. Oscar Muñoz Toledo, the former chancellor of the Archdiocese of Santiago. Muñoz is alleged to have seven victims, five of them his own nephews.

Instead of immediately appointing a new archbishop of Santiago, Pope Francis named Bishop Celestino Aós Braco, 73, the ordinary of Copiapó, as apostolic administrator for the principal diocese of Chile. Aós, a Spanish Capuchin priest, has lived in Chile since 1983. Among his many Chilean responsibilities, he served as promoter of justice for the ecclesiastical tribunal of Valparaiso. In this role, he investigated complaints of abuse made by ex-seminarians against five priests in 2012. Some believe, however, that he did a poor job of it.

According to Crux magazine, Aós investigated the cases for three months before dismissing them on the grounds that “there wasn’t enough evidence to merit opening a canonical process.” One of the priests under scrutiny died in 2016, but the others have since been suspended from the priesthood or are again being investigated.

One of the alleged victims told Crux that the pope had made a mistake in appointing Aós as apostolic administrator of Santiago.

“In my opinion, the pope made a terrible mistake,” said Mauricio Pulgar. “There are many other really good candidates, who have not covered up. I think this is a really bad signal for victims of clerical abuse, and also for all the lay movements trying to clean up the Church.”

Doubting that the appointment of Aós will bring “truth, justice or reparation” to Santiago, Pulgar told Crux he thinks “the pope made a terrible mistake, is mocking Chile, or received terribly bad advice.”

Others told Crux’s reporter that they were happy to see Ezzati go and willing to give Aós “a second chance.”

Cardinal Ezzati maintains that he is innocent of covering up crimes.

“I leave with my head held high,” he stated. “Every accusation has been responded to, and we will have to wait for what justice says: it is not enough for one to be accused of a cover-up; it has to be proven.”

Last summer, Ezzati was ordered to meet with Chilean prosecutor Emiliano Arias in Rancagua, the diocese in which Muñoz is said to have abused one of his alleged victims. Rancagua is also the site of an ongoing investigation into a group of more than a dozen priests who called themselves “The Family” and have been linked to sexual abuse, homosexuality, and prostitution.

The Archdiocese of Santiago itself gave notice of the summons on its website last July 24. Translated into English, it reads:

As of today, the Archbishop of Santiago, Cardinal Ricardo Ezzati, was summoned by the Regional Prosecutor of Rancagua to testify, as the accused party, on August 21, about his possible responsibility for the crime of ‘encubrimiento’ [covering up for subordinates].

“I reiterate my commitment and that of the Church of Santiago to the victims, to the search for truth and to respect for civil justice. I have the conviction that I have never covered-up or obstructed justice, and as a citizen I will comply with my duty to provide all the information that may assist in clarifying the deeds in question,” stated the archbishop of Santiago.

Ezzati was indicted after Arias found a letter written by another Chilean archbishop accusing the cardinal of mishandling the clerical sexual abuse scandals. The letter was written by the then-archbishop of Rancagua, Alejandro Goic, in June of 2013.

1
World Economic Forum adviser Yuval Harari is a Marxist who believes there is no truth, only power
2
Dr. Robert Malone: Endless mRNA jabs are in the works as the CDC and FDA play ‘hide the data’
3
Pope Francis says there are ‘insufficient elements’ to launch investigation into Cdl. Ouellet
4
Episcopal Church endorses sex changes for children ‘at all ages’
5
Some medical professionals are claiming pro-life laws stop them from prescribing pain-killers. They don’t
Subscribe to Daily Headlines »