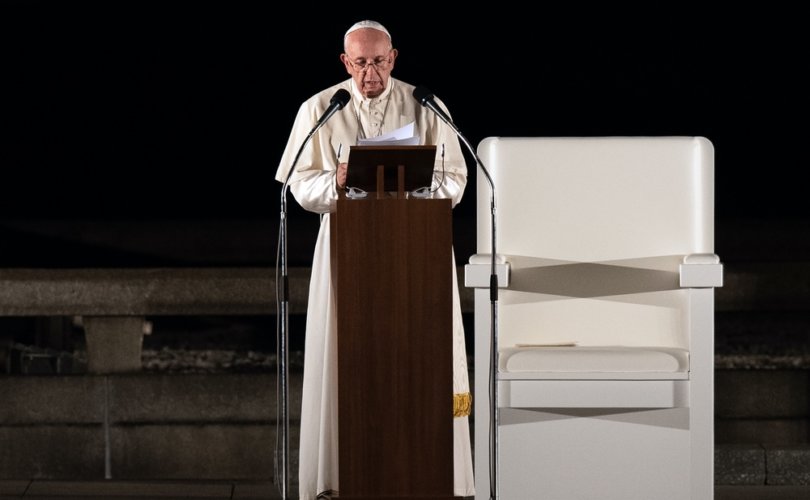 ROME, January 9, 2020 (LifeSiteNews) — In a renewed and enthusiastic endorsement of globalism in 2020, Pope Francis today repeated his call for international and religious leaders to sign a “Global Education Pact” in May at the Vatican, saying it is all the more urgent in light of the sexual abuse crisis.

In his annual New Year’s audience with the diplomatic corps accredited to the Holy See, the Pope looked back at key events of 2019, including last February’s Vatican sex abuse summit.

He told diplomats that “given the gravity of the harm involved [in the sexual abuse crisis], it becomes all the more urgent for adults not to abdicate their proper educational responsibilities, but to carry out those responsibilities with greater zeal, in order to guide young people to spiritual, human and social maturity.”

“For this reason,” the Pope continued, “I have planned a worldwide event to take place on 14 May next with the theme: Reinventing the Global Compact on Education.”

When he launched the initiative last September, Pope Francis said that “a global educational pact is needed to educate us in universal solidarity and a new humanism.”

A Vatican-backed website to promote the pact added: “Educating young people in fraternity, in learning to overcome divisions and conflicts, promote hospitality, justice and peace: Pope Francis has invited everyone who cares about the education of the young generation to sign a Global Pact, to create a global change of mentality through education.”

Citing his September 2019 message for the launch, in his address to diplomats on Thursday, the Pope explained that: “This gathering is meant to ‘rekindle our commitment to and with young people, renewing our passion for a more open and inclusive education, including patient listening, constructive dialogue and better mutual understanding.’”

“‘Never before has there been such need to unite our efforts in a broad educational alliance, to form mature individuals capable of overcoming division and antagonism, and to restore the fabric of relationships for the sake of a more fraternal humanity,’” he said.

“All change, like the epochal change we are now experiencing, calls for a process of education and the creation of an educational village capable of forming a network of open and human relationships,” he said.

The Pope asserted that in order to reach the objectives of the Global Education Pact, as a “village” we must “put the human person at the center, investing creatively and responsibly in long-term projects” that “train individuals willing to offer themselves in service to the community.”

“What is needed,” he said, “is an educational vision that can encompass a broad range of life experiences and learning processes, in order to enable young people, individually and collectively, to develop their personalities.”

When the Vatican launched the Global Education Pact back in September, Pope Francis omitted any reference to the prerogatives of parents as the primary educators of their children. This comes at a time when the right to homeschool and the right to a free choice of school are threatened, and when countries throughout the world levy taxes to provide public schooling to which no Catholic parents could safely send their child.

In his annual address to diplomats, on January 9, the Pope insisted that “education is not limited to school and university classrooms,” but is “principally ensured by strengthening and reinforcing the primary right of the family to educate, and the right of Churches and social communities to support and assist families in raising their children.”

In comments to LifeSiteNews following today’s papal audience, Eduard Habsburg, Hungary’s ambassador to the Holy See, who was present at the address, said: “In a time of globalization it is important not to forget the first right of children is to one father and one mother and the first right of parents is to educate their own children according to their values.”

Noting the educational pact’s potential to affect society, Pope Francis stressed the importance of “sincere and genuine dialogue with young people,” who “are the ones who above all make us aware of the urgent need for that intergenerational solidarity which has sadly been lacking in recent years.”

The Pope lamented the tendency, in many parts of the world, to be “self-absorbed, to defend acquired rights and privileges, and to view the world within a narrow horizon that treats the elderly with indifference and no longer welcomes the newborn.”

“The general ageing of the world population, especially in the West, is a sad and emblematic example of this,” he said, adding that young people “have much to offer, thanks to their enthusiasm and commitment. To say nothing of their thirst for truth, which constantly reminds us of the fact that hope is not utopian and that peace is always a good that can be attained.”

He said that one of the places where many young people “have become active in calling the attention of political leaders to the issue of climate change.”

“Care for our common home ought to be a concern of everyone and not the object of ideological conflict between different views of reality or, much less, between generations,” he said.

“Young people are telling us that … at every level we are being urgently challenged to protect our common home and to ‘bring the whole human family together to seek a sustainable and integral development,’” he said. “They remind us of the urgent need for an ecological conversion, which ‘must be understood in an integral way, as a transformation of how we relate to our sisters and brothers, to other living beings, to creation in all its rich variety and to the Creator who is the origin and source of all life.’”

The second area Pope Francis linked to the educational pact is interreligious dialogue.

Recalling his February 2019 visit to Abu Dhabi, and co-signing of the Document on Human Fraternity for World Peace and Living Together with the Grand Imam of Al-Azhar Ahmad Al-Tayyeb, the Pope said, “it is particularly important to train future generations in interreligious dialogue, the main road to greater knowledge, understanding and reciprocal support between the members of different religions.”

In launching the Global Education Pact last September, Pope Francis mentioned the Abu-Dhabi document and said that in this new global village, “the ground must be cleared of discrimination and fraternity must be allowed to flourish.”

Conferences and events will be held throughout 2020 to prepare for the May 14 signing of the “Global Pact” on education.