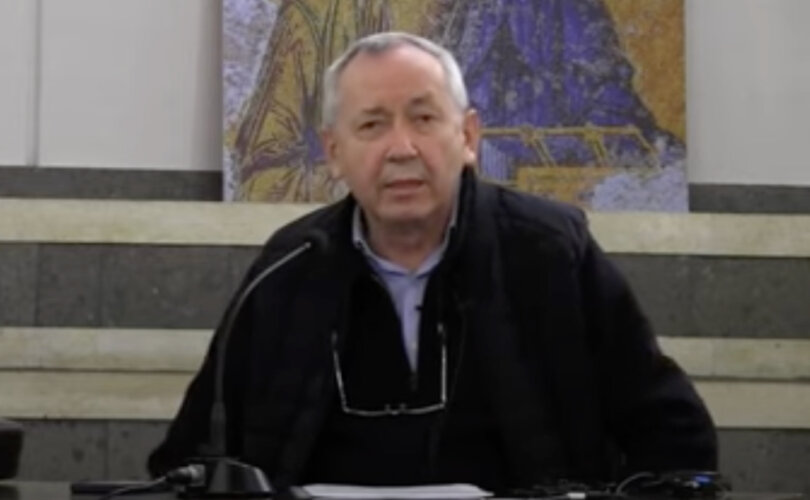 VATICAN CITY (LifeSiteNews) – Pope Francis has reportedly intervened to swiftly lift the excommunication of a notable Jesuit, who was automatically excommunicated and found guilty by an ecclesiastical court of absolving in confession a woman with whom he had sexual relations.

Italian news outlet Left.it recently reported that Father Marko Ivan Rupnik S.J. had been accused of psychologically and sexually abusing religious sisters. Rupnik, a prominent Jesuit and director of Rome’s Aletti Center, had been accused by a number of nuns in Slovenia of “psychological abuse and sexual violence,” reported Left.

The accusations themselves dated back to the early 1990s and involved the community of nuns which was founded by a nun to whom Rupnik was both a friend and a “spiritual father.”

After allegations were made against Rupnik, the bishop of Ljubljana removed the Slovenian Jesuit from the diocese in 1992-93. Since just prior to then Rupnik has been based in Rome at the Centro Aletti.

Rupnik, a prominent artist, has gained increased notoriety in recent years due to painting the official image of the 2022 World Meeting of Families and, upon the request of Pope John Paul II, leading the renovations of the Vatican’s Redemptoris Mater Chapel.

Left reported that, with the Vatican unable to ignore the reportedly increasingly evident turmoil in the religious community Rupnik had left behind in Slovenia, an ecclesiastical procedure was initiated against him in 2021, led by fellow Jesuit Bishop Daniele Libanori – the auxiliary bishop of the Diocese of Rome.

However, according to Left’s un-named source, while the news has only emerged in recent days, Rupnik has actually already faced a canonical trial and been found guilty in early 2022.

This was corroborated by Italian Catholic news site Messa in Latino, who wrote that “high level source” had confirmed Rupnik had indeed faced trial earlier this year.

Gruesome, if true: famed Jesuit priest/artist Marko Rupnik accused & canonically convicted of psychological & sexual abuse against nuns dating back to the 1990s – which has been covered up, with the Pope immediately lifting the incurred «latae sent.» excommunication (Can. 1384). https://t.co/End30tiqNi

The Jesuit had been convicted for “absolving the accomplice in confession.” According to Messa in Latino, the tribunal had unanimously ruled that Rupnik had

allegedly absolved in confession a woman (of age and consenting) with whom he had engaged in “de sexto” [against the sixth commandment] relations.

With this being a direct violation of Canon 977, Rupnik thus would have incurred an automatic excommunication, or a latae sententiae excommunication, according to Canon 1378 §1. This was handed down by the Tribunal.

Yet, according to the blog’s “high level” sources, Pope Francis intervened within “a few hours” to overturn the excommunication, thus removing the penalty from the Slovenian priest.

A few hours after the notification of the sentence, however, due to pressure from Fr. Rupnik the Holy Father lifted the excommunication, in contrast with the decisions of the court. The Jesuits themselves, who had a statement on the matter ready, were stopped.

The blog’s sources added that Pope Francis’s alleged intervention in favor of Rupnik had further implications. Referencing the abuses, dating back “to more than 30 years ago,” Messa in Latino wrote that the Jesuit’s attorney general wished to take Rupnik’s case to trial, since the abuses were “defined as ‘gruesome’.”

However, the trial did not occur, with the blog’s sources stating that this was due to Francis’ intervention:

Despite this it seems that, due to the Holy Father’s intervention, the process did not take place precisely because it was “time-barred” [bound by the statute of limitations.]

“If so we are faced with a strange conception of ecclesiastical criminal law,” continued the Catholic blog, “the statute of limitations is used for friends and not for enemies.”

Pope Francis’s respect for Rupnik is substantial, having engaged the Jesuit to lead meditations in the Vatican at which Francis was present in years past.

LifeSiteNews has contacted the Jesuit order to inquire about the Pope’s reported intervention for Rupnik’s alleged excommunication, and will update this report upon receipt of a response.

Jesuits confirm some restrictions on Rupnik

On December 3, the Jesuit order released an official statement addressing the case, confirming that Rupnik had been subject to restrictions on his ministry due to allegations made against him. The statement was notable for what it stated, as much as for what it did not.

As reported by Silere non Possum, the Congregation (now Dicastery) for the Doctrine of the Faith (CDF) had received a complaint against Rupnik in 2021, which did not involve “minors.”

According to the Jesuit order, they were asked by the CDF to investigate Rupnik, and “immediately appointed an external investigator (a religious from another institute).”

The press release noted that during the investigation Rupnik was forbidden from offering Confession, spiritual direction, or leading the Spiritual Exercises. He was additionally forbidden form engaging in any “public activities” without his local superior’s permission.

The press release thus confirms implicitly that Rupnik was investigated twice – by Bishop Libanori and by the un-named religious mentioned in the press statement.

It stayed short of mentioning that Pope Francis reportedly intervened to lift Rupnik’s excommunication. But noting this absence, Messa in Latino did not back down from this weighty claim of Papal intervention on behalf of Rupnik, stating that this was something “which we still confirm.”

The Jesuit’s press statement also confirms that, regardless of alleged Papal interventions, the Jesuit Order is not happy to allow Rupnik back into public ministry.

Yet, notwithstanding the restrictions he still lives under, Rupnik is enjoying a public life. His Centro Aletti YouTube channel posts a weekly video in which the priest discusses the Gospel. The Diocese of Rome also posted a video in February of this year, in which Rupnik was speaking about adoration.

As Silere non Possum noted, Rupnik also preached a clergy retreat in May, and preached another retreat in August. Indeed, a number of recordings of public events led by Rupnik can be found online.

Having just received an honorary doctorate from Brazil’s Pontifical Catholic University of Paraná at the end of November, in February 2023 he is now scheduled to lead the four-day Spiritual Exercises at the Pontifical Sanctuary of the Holy House of Loreto.