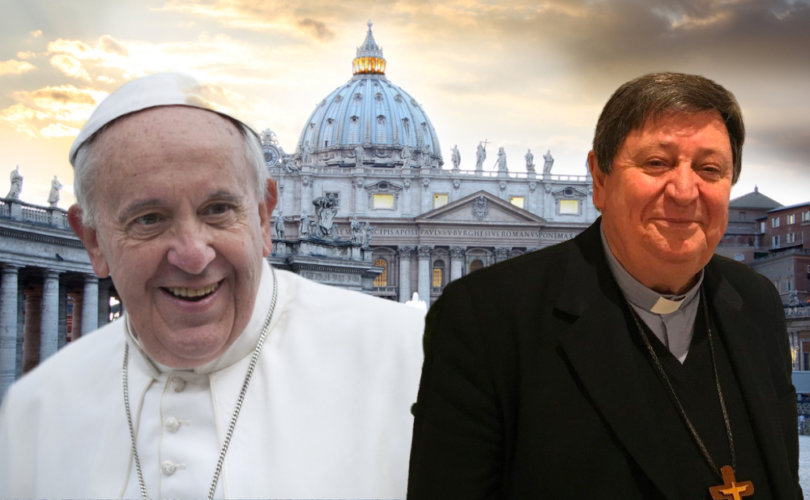 VATICAN CITY (LifeSiteNews) – Pope Francis has issued a directive limiting the powers of diocesan bishops by ordering them to seek the Vatican’s permission before establishing any groups of the faithful looking to become religious institutes or societies, in a move which has been described as an attempt to prevent any new traditional communities from being formed.

Pope Francis’s directive, or Rescript, was issued June 15, but signed February 7 during an audience he gave to Cardinal João Braz de Aviz, and Archbishop José Rodríguez Carballo, the Prefect and Archbishop Secretary respectively of the Dicastery for Institutes of Consecrated Life and Societies of Apostolic Life.

The Rescript, issued in Italian, is to be “promulgated by publication in L’Osservatore Romano, entering into force immediately, and then published in the official commentary of the Acta Apostolicae Sedis,” which contains the official documents and actions of the Holy See.

As noted by Vatican journalist Diane Montagna, the Pope’s Rescript thus necessitates a change in Canon Law 312 §1, although the Rescript made no mention of such a change having taken place or being about to occur, suggesting that Cardinal Braz de Aviz might not have realized the contradiction the directive places upon existing Canon Law.

READ: Abp. Viganò: Pope Francis has chosen his new cardinals for their ‘corruptibility’

Canon 312 §1 currently defends the right of local bishops to erect public associations of the faithful, stipulating:

The authority competent to erect public associations is:

1/ the Holy See for universal and international associations;

2/ the conference of bishops in its own territory for national associations, that is, those which from their founding are directed toward activity throughout the whole nation;

3/ the diocesan bishop in his own territory, but not a diocesan administrator, for diocesan associations, except, however, for those associations whose right of erection has been reserved to others by apostolic privilege.

The new restrictions placed upon diocesan bishops will have the practical effect of stifling the growth of new communities or orders, particularly traditional ones, should they not meet with the approval of the staunchly anti-traditionalist Braz de Aviz.

When combined with Traditionis Custodes, Cardinal-elect Arthur Roche’s Responsa ad dubia, and the 2018 document Cor Orans – described as a “cruel and merciless” assault against contemplative orders, motivated by “hatred” – the new Rescript adds to the recent string of stringent Vatican actions attempting to curtail the future of the Traditional Latin Mass and groups who are devoted to it.

Speaking to LifeSiteNews, Brother Martin of the Oblates of St. Augustine – which is itself a de facto association – warned that “the immediate intent of this change in the Code of Canon Law appears to be to prevent traditional Catholic Religious communities, such as new Franciscan or Augustinian communities, from acquiring juridic personality.”

“Although it appears that these communities may still obtain the status of a Private Association with approved statutes, Rome has sent the bishops a very clear message,” said Martin.

— Article continues below Petition —
Pope Francis: Don't make Bishop McElroy a cardinal - he knew about McCarrick
Show Petition Text
12691 have signed the petition.
Let's get to 15000!
Thank you for signing this petition!
Add your signature:
Show Petition Text

He added that while local bishops “have the duty to prevent the erection of communities duplicating charisms of already existing Religious Institutes or Societies of Apostolic Life, many traditional priests and Religious who are members of already existing communities find that they are forbidden by their community to practice the traditional Catholic faith and pray using the Church’s ancient Rite.”

Such priests and religious, after “encountering unchristian behavior and persecution behind the scenes,” end up leaving their communities “to begin an Association of the Faithful, borrowing much of their original charism, but including a specific difference to meet the requirements to obtain juridic personality,” said Martin.

The religious brother added how such a move had been employed by some seminarians from the Franciscan Friars of the Immaculate, who left to “form a new community to circumvent persecution.”

Traditional and contemplative religious communities have been under increasing pressure from the Vatican, particularly since the publication of Cor Orans and the 2016 document Vultum Dei quaerere. Father Maximilian Mary Dean, a former Franciscan Friar of the Immaculate and the chaplain to the discalced Carmelite nuns of Fairfield, Pennsylvania, warned that under Cardinal Braz de Aviz, the Dicastery for Institutes of Consecrated Life was “just going to destroy the vocations and the way of life.”

Commenting on the new Rescript, Mike Parrott, host of the Restoring the Faith Media podcast, wrote that “if Cor Orans was a frontal attack on contemplative cloisters, this is the accompanying assault on all other would-be traditional communities or monasteries.”

If Cor Orans was a frontal attack on contemplative cloisters, this is the accompanying assault on all other would-be traditional communities or monasteries.

“De Facto Association of the Faithful.” Learn it. Love it. Live it. https://t.co/5JVellI9oc

Speaking to LifeSiteNews, Parrott said that the Pope’s Rescript, “which comes on the heels of Francis’ cynical comment that we ‘still have 40 more years’ to convince everyone that this disastrous New Springtime really is the way forward, reinforces the perceived contempt this pope has for the ‘rigid restorationists’ he weekly mocks.”

“Notwithstanding the unending and out of touch personal attacks on grandmothers wearing lace, the move contradicts Francis’ stated goal of decentralizing a new ‘Synodal Church,’ in which German Bishops are, for example, free to redefine Catholic Dogma on marriage and sexuality,” added Parrott.

In the Pope’s December 2021 address to the Plenary Assembly of the Congregation for Institutes of Consecrated Life and Societies of Apostolic Life, he urged those present to “develop collaboration with the diocesan bishops” regarding the formation of new communities. Such “mutual listening” would prevent “the inappropriate creation of institutes without sufficient motivation or adequate vigour perhaps with good will, but with something missing,” said Francis.

However, with “mutual listening” now being replaced by a curtailment of the diocesan bishops’ right to erect associations, Parrott stated that the Rescript “further deprives bishops of their natural governance powers in the same way Traditionis Custodes and Cor Orans have done, ensuring Rome has both the last word, but also the first word too, on restricting the growth of [traditional] Catholicism.”