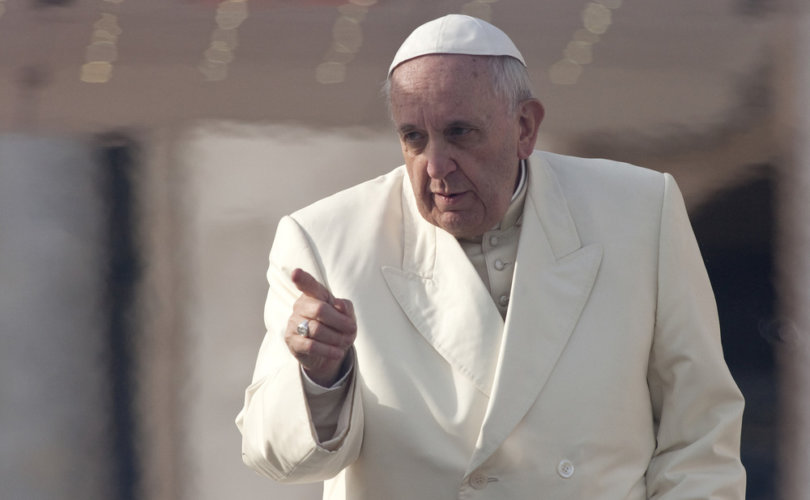 VATICAN CITY, September 18, 2018 (LifeSiteNews) – To Archbishop Carlo Viganò’s allegations, Pope Francis will say not a word. But on the theme of the Great Accuser, he has preached four times.

This morning, September 18, after preaching on the Gospel of the day – in which Jesus raises the son of the Widow of Nain (Luke 7:11-17) – Francis shifted from thoughts on Christ’s compassion to those concerning His silence before the “Great Accuser.”

According to the Vatican’s own news website, Vatican News, Francis believes Christ’s silence was itself a form of compassion.

“The Pope brought up that it was also the people who yelled ‘crucify him,’” Sister Bernadette Mary Reis, fsp related at Vatican News.

“‘Jesus then compassionately remained silent because ‘the people were deceived by the powerful’, Pope Francis explained. His response was silence and prayer. Here the shepherd chooses silence when the ‘Great Accuser’ accuses him ‘through so many people’. Jesus ‘suffers, offers his life, and prays’, Pope Francis said.”

These reflections were met with concerns online that the Holy Father, who has refused to respond directly to Archbishop Viganò’s accusations that he knowingly resurrected the career of a sexually abusive American cardinal, is identifying himself with the Lord Jesus Christ.

“Is he comparing himself to Jesus?” wrote Damien McDonnell, OP on Twitter. “This just gets more and more horrific.”

If so, Francis could be suggesting that “the powerful” who are “deceiving” the people are clerics and laypeople publicly demanding that the Pope answer the allegations whereas the “Great Accuser” (or Satan) is Archbishop Viganò, who is apparently now in hiding.

According to the Vatican’s own news site, the pontiff said, “it seems the ‘Great Accuser’ is attacking the bishops of the Catholic Church to create scandal.”

“In these times, it seems like the ‘Great Accuser’ has been unchained and is attacking bishops,” he said. “True, we are all sinners, we bishops. He tries to uncover the sins, so they are visible in order to scandalize the people. The ‘Great Accuser,’ as he himself says to God in the first chapter of the Book of Job, ‘roams the earth looking for someone to accuse.’”

In response, there was a flurry of outrage on Twitter as people expressed their feelings about the sins of the bishops.

Catholic author and commentator Patrick Coffin tweeted, “‘The Great Accuser tries to uncover the sins, so they are visible in order to scandalize the people.’ — words actually spoken by @Pontifex this morning. Logical conclusion: the sins should stay hidden so the devil can't cause scandal. Speechless.”

Pope Francis returned to the theme of “the Great Accuser” on September 13, the day he met with a delegation of American prelates who planned to ask him for an Apostolic Visitation and investigation into the process that eased the notorious sexual predator Archbishop Theodore McCarrick up the ladder to the highest echelons of the Church hierarchy. During this homily, the Holy Father concentrated on the evils of gossip and accusation.

According to Vatican News, Pope Francis said that “only the merciful are like God the Father.”

“This is the path, the path that goes against the spirit of the world, that thinks differently, that does not accuse others,” he said. “Because among us is the ‘Great Accuser,’ the one who is always going about to accuse us before God, to destroy.”

Afterwards the Pope met with the American bishops to talk about accusations of cronyism, cover up, and sexual abuse of minors and vulnerable adults in the Church.

Then on September 14, the Feast of the Exhalation of the Cross, Pope Francis returned once again to thoughts about the “Great Accuser.” This time, however, he likened the “Great Accuser” to a serpent, a chained dog, and a hungry fish that swallowed Christ on the cross.

“As the Fathers of the Church say, Pope Francis continued, Satan saw Jesus in such a bad state, and like a hungry fish that goes after the bait attached to the hook, he swallowed Him. ‘But in that moment’, the Pope said, ‘he also swallowed His divinity because that was the bait attached to the hook. ‘At that moment, the Pope said, Satan was destroyed forever. He has no strength. In that moment the cross became a sign of victory”.”

But notwithstanding this eternal destruction, the Great Accuser is still a danger to the faithful, Francis explained:

“And the ancient serpent that was destroyed still barks, still threatens but, as the Fathers of the Church say, he is a chained dog:  do not approach him and he will not bite you; but if you try to caress him because you attracted to him as if he were a puppy, prepare yourself, he will destroy you”.

The remarks about the dogs are reminiscent of a homily the Holy Father gave on September 3. In that homily, the Pope referenced a congregation that was so maddened by Jesus’s words in the synagogue that they tried to throw him over a cliff.

“They weren’t people, they were a pack of wild dogs that chased Him out of the city,” the pontiff declared. “They weren’t thinking.”

But in the face of their reaction, which included an attempt to throw Jesus off a cliff, Pope Francis said, “Jesus was silent.”