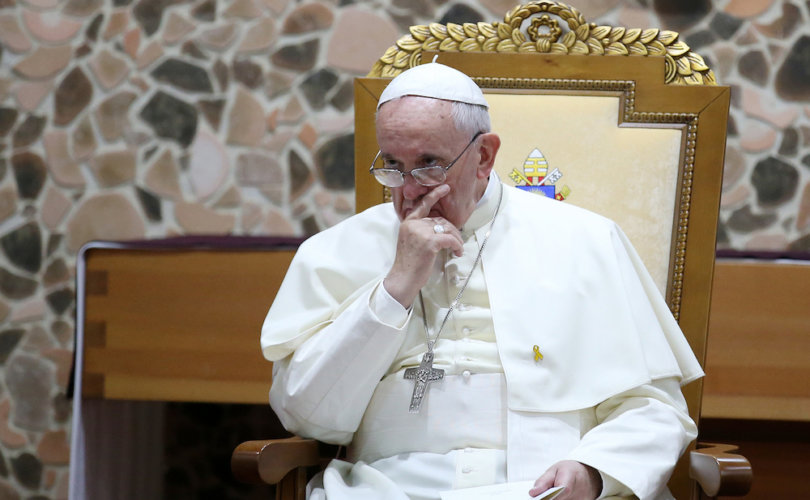 November 3, 2016 (LifeSiteNews) — “We have presented a theological ideal of marriage that is too abstract, almost artificially constructed,” Pope Francis suggested last month.

Pope Francis received all members of the academic community of the Pontifical John Paul II Institute for Studies on Marriage and the Family in an audience in the Vatican on October 27. The meeting made headlines after Francis’ decision to personally replace Cardinal Robert Sarah for this address.

In his speech, available in English here, at the Vatican’s Clementine Hall on the occasion of the opening of the academic year, Francis explained that the Church’s catechesis on marriage sometimes might have been too abstract for the common faithful.

Francis suggested that sometimes teachings on marriage were unable to combat the challenges of contemporary families: “Therefore, we must learn not to be resigned to human failure, but let us sustain the rescue of the creative plan [for humanity] at all costs.” Francis went on to say that many people were put off by an unobtainable ideal. “This excessive idealization, especially when we have not reawakened confidence in grace, has not made marriage more desirable and attractive, but all the contrary.”

While Francis pointed out that the family needs help and accompaniment, his strong insistence on “at all costs” and his strong, generalized denunciation of past praxis threatens to give rise to interpretations such as Cardinal Walter Kasper’s in his recent publication. Where Cardinal Kasper writes that the moral “ideal” is an “optimum” — implying too that it is unreachable by many — and states that “oftentimes, we have to choose the lesser evil […]; in the living life there is no black and white but only different nuances and shadings,” one could easily connect the statements of the Supreme Pontiff with those of the German theologian and Cardinal.

It is not the first time that Pope Francis publicly criticized “rigidity.” Earlier the same week, on October 24, Pope Francis called “rigid” people “sick” in his daily Mass homily at the Casa Sancta Martae. “Behind an attitude of rigidity there is always something else in the life of a person. Rigidity is not a gift of God. Meekness is; goodness is; benevolence is; forgiveness is. But rigidity isn’t!” he said.

It is surprising that Pope Francis addressed these words to the members of the John Paul II Institute, who have historically held to the Church’s Magisterium with fidelity and clarity. The Pope suggested that upholding the ideal of the Church’s teaching seems to create a “distance” from the common people: “Today’s pastoral topic is not only that of the ‘distance’ of many from the ideal and practice of the Christian truth of marriage and the family; more decisive yet is the topic of the Church’s ‘closeness,’ closeness to the new generations of spouses so that the blessing of their bond increasingly convinces them and accompanies them, and closeness to the situations of human weakness, so that grace can rescue them, give them new courage and heal them.”

The “new horizon of this commitment” invokes Cardinal Kasper and others to claim they have the right understanding of mercy, in which the doctor (the pastor) somehow has to enter the sickness rather than heal it from his “sane” and “healthy” standpoint. Pope Francis explained in this matter: “Let us not forget that good theologians also, as good pastors, smell of the people and of the street and, with their reflection, pour oil and wine on men’s wounds.”

A reader can only hope that the secular world, together with its media spin-doctors, does not take Francis’ words on “the Church’s closeness” to situations of “human weakness” and  the “crisis of the contemporary family” as to mean that the Church condones gay “marriages,” divorce and remarriage, and abortions in certain cases. And indeed, Francis himself condemned in his speech the “imposition of ideologies that attack the family project directly,” which can hardly be something else than the modern ideologies like gender theory.

At the same time, Pope Francis respected Pope St. John Paul II’s teaching that the Institute continues in living tradition, praising it as “timeless” and “fruitful.” “His wise discernment of the signs of the times restored with vigor the attention of the Church and of human society itself to the profundity and delicacy of the bonds that are generated from the conjugal alliance of man and woman. The development that the Institute has had in the five continents confirms the validity and meaning of the 'catholic' form of its program,” Francis said.

The Pontifical John Paul II Institute for Studies in Marriage and Family has its campus at the Lateran University of Rome and has been forming and educating students since 1981. Their latest academic addition is a Masters in Bioethics.