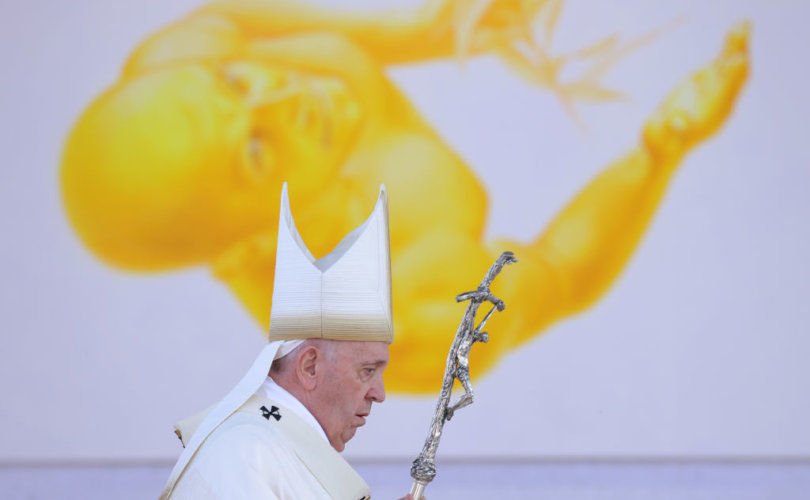 (LifeSiteNews) — In a new airplane interview Wednesday, Pope Francis once again expressed his support for same-sex civil unions, calling for laws to promote civil unions since “we are all equal.” Nevertheless, he ruled out marriage being opened up to same-sex “couples.”

“If they want to support a homosexual couple in life together, states have the possibility of civilly supporting them,” stated the pontiff in remarks translated differently by various news outlets.

The comments prompted concern among Catholics. Br. Martin Navarro Ob. S.A. warned that the Pope’s support for same-sex unions “is tacitly equating a same-sex union with a family.”

Marriage is an unchangeable sacrament, but homosexuals can have civil unions

Responding to a question from Stefano Maria Paci of Sky Tg 24, about the “recognition of homosexual marriages,” the 84-year-old pontiff first referenced marriage.

However, while ruling out same-sex “marriage,” Pope Francis pointed to other ways in which same-sex relationships could be recognized. “There are laws that try to help the situations of many people who have a different sexual orientation,” he attested.

The full text of the interview, as provided by the National Catholic Register, is slightly longer than that given by Vatican News, and demonstrates greater papal support for same-sex unions from the Pope.

Noting how it is “important” to “help” people desiring same-sex unions, or “marriages,” while nevertheless refraining from “imposing things that by their nature do not enter in the Church,” Francis defended state support for same-sex unions.

Continuing his theme, Pope Francis hinted at support for same-sex unions, providing they did not take the form of sacramental marriage. “Marriage as a sacrament is clear, it is clear,” he stated.

“There are civil laws that provide if they want to associate, a law to have the health service, to have […] among them, these things are done,” he added. “Please do not make the Church deny her truth. Many, many people of homosexual orientation approach the Sacrament of Penance, they approach to ask priests for advice, the Church helps them to move forward in their lives. But the sacrament of marriage is something else.”

Noting how his words on the matter often create “confusion,” the Pope added that “we are all equal,” according to Crux. Vatican News reported he said “[t]hey are all equal brothers and sisters.”

EuroNews reported that the Pope had described same-sex civil unions as being “good and helpful to many,” however neither the Vatican’s nor NCR’s transcript of the in-flight interview contains this statement.

“Christians who are homosexual are called, as all of us are, to a chaste life,” continued the CDF’s document, while noting that a “truly pastoral approach will appreciate the need for homosexual persons to avoid the near occasions of sin.”

Furthermore, “all Catholics are obliged to oppose the legal recognition of homosexual unions,” taught the CDF.

He can find ‘something good in everything except Catholicism’

“The Holy Father has reiterated his approval for same-sex civil unions as he did a few months in a documentary,” Br. Martin Navarro of the Oblates of Saint Augustine told LifeSiteNews.

The Holy Father is in favor of providing members of same-sex civil unions the same civil liberties that are granted to married couples. These civil liberties are granted to married couples in order to provide for their spouse and children. In other words, to support a family, which is the nucleus of society. To be in favor of providing these same civil liberties to those who cannot form a family, or cannot provide the adequate environment necessary for the raising of children (as is the case of having two fathers or two mothers), is tacitly equating a same-sex union with a family. For the benefits that these civil liberties grant, those in same-sex unions can acquire them in the same ways as any other single person must.

John Horvat, vice president of the American Society for the Defense of Tradition, Family and Property, told LifeSiteNews that “homosexual civil unions are intrinsically evil and gravely sinful no matter the circumstances.”

“The unnatural sin of sodomy has always been condemned by the Church and this will never change because God and His Divine Law will never change,” continued Horvat. “It is apocalyptically scandalous and a great shame that the highest authority on earth, the Vicar of Christ, publicly endorses homosexual civil unions. It is indicative of our sinful times and why Our Lady warned us of a great chastisement in Fatima.”

Meanwhile, U.K. commentator and blogger Laurence England quipped: “He has the uncanny ability to find something good in everything except Catholicism.”

Following the interview, LGBT advocates were very public in their praise of the Pope’s support for civil unions.

“If there was any debate left over whether @Pontifex supports same-gender civil unions, it is settled. The pope clearly supports LGBTQ couples being legally protected,” tweeted the group.

History of support for civil unions

The Pope’s comments are but the latest in a long history of support, of varying degrees of strength and clarity, for same-sex unions. Only last year, he voiced his support for the unions in the film Francesco, calling for “a civil union law.”

Bishop Athanasius Schneider of Kazakhstan pointed out how such an approach is no act of kindness toward persons with same-sex attraction; rather, it is an act of cruelty.