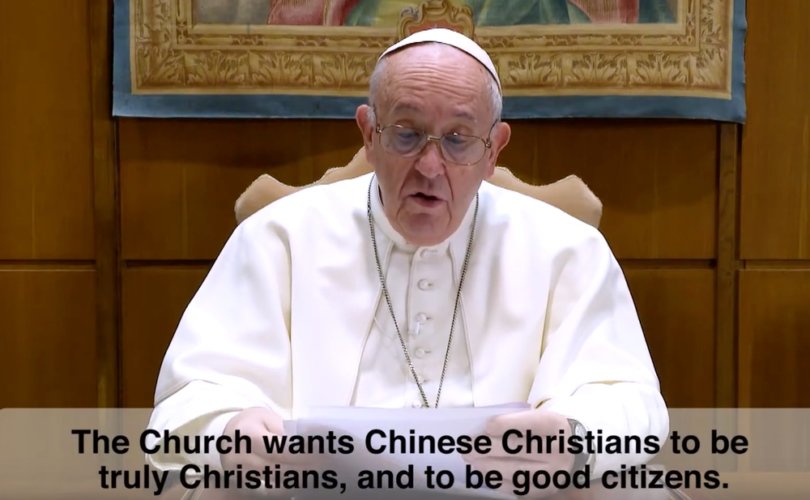 ROME, Italy, March 6, 2020 (LifeSiteNews) – Pope Francis encouraged Chinese Catholics in the communist-run country to be “good citizens” and not to engage in “proselytism.”

“The Church wants Chinese Christians to be truly Christians, and to be good citizens,” Pope Francis said. “They should promote the Gospel, but without engaging in proselytism, and they need to achieve the unity of the divided Catholic community,” he said, likely referring to the distinction between an official state-sanctioned church and the underground church.

The Pope claimed that the Church in China “looks to the future with hope.” The remarks of the Holy Father come as part of a video presenting his prayer intentions for the month of March.

He concluded the brief video by asking for prayer “that the Church in China may persevere in its faithfulness to the Gospel and grow in unity.”

Accordingly, while Pope Francis thinks “the Church in China looks to the future with hope,” the situation on the ground looks rather grim.

Only recently, the human rights magazine Bitter Winter reported “believers were offered monetary rewards if they agreed to ask the priests’ relatives and friends to put pressure on them to join the CPCA.”

This took place in the Diocese of Mindong in the southeastern province of Fujian. Refusing to join the CPCA, those priests are exposed to “threats, coercion, and suppression.”

The local government in a part of the diocese had invited Catholics to a meeting, telling them that priests who refuse to join the state-sanctioned “church” – for instance, Bishop Guo Xijin, an auxiliary bishop in the diocese – need to be “transformed.”

“They promised that churches would function normally as long as the priests joined” the Chinese Patriotic Catholic Association. Then, Catholics were offered bribes to help with integrating priests of the underground church into the state-sanctioned “church.”

“Moreover, the participants were asked to create compromising situations, for example, pretend to be giving money to priests or have women pose as if they are involved with them, and take photos, which would later be used to intimidate them,” Bitter Winter continued.

As a last step, priests who continue to resist “will be put under house arrest, and their power and water supply would be cut off. They will be pressured ‘until they break down, go insane, or even commit suicide.’”

Hong Kong’s Cardinal Joseph Zen has been the most prominent and outspoken critic of the secret deal between the Vatican and China.

In February, Zen told LifeSiteNews in an exclusive video interview that the CPCA “has always been objectively schismatic” and remains that way, “but with the blessing from the Holy See.”

As he had done before, Zen attacked Vatican Secretary of State, Cardinal Pietro Parolin, as “not acting for the faith.”

“I’m sorry to say, he is not a man of faith because he despises the heroes of faith,” Zen said about the cardinal who is, to a large extent, responsible for the deal between the Vatican and China.

Commenting on the deal, Zen warned that communists “never accept compromise. They want full surrender. And so now we are at the bottom. They finished the operation selling the Church.”