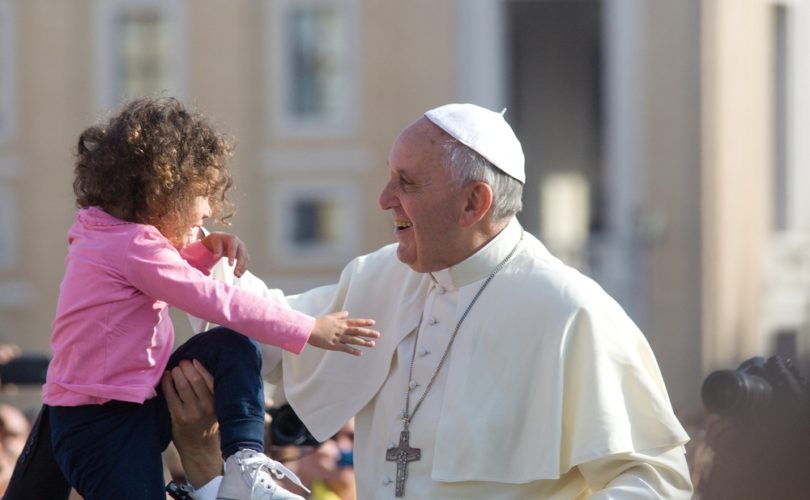 ROME, May 20, 2015 (LifeSiteNews.com) — Parents have “self-exiled from the education of their children” and must take back their role as their children’s educators from the “so-called experts,” says Pope Francis.

At his May 20 weekly general audience, the Holy Father spoke out strongly against “intellectual critics” who have “have silenced parents in many ways, to protect the young generation from the damage – real or imagined – of family education,” according to Zenit.

“Yet the relationship between family and school ought to be harmonious,” said the pope. “Our children need sure guidance in the process of growing in responsibility for themselves and others. Christian communities are called to support the educational mission of families.”

Pope Francis said that “experts” have usurped the “role of parents even in the most intimate aspects of education. … On the emotional life, personality and development, rights and duties, the ‘experts’ know everything: objectives, motivations, techniques.”

And “the family has stood accused, among other things, of authoritarianism, cronyism, of conformism, of affective repression that generates conflicts.”

This has created a crisis of trust between the family and society, with parents backing away from educating their children, the Holy Father said. “Parents spend less time with their children, and schools are often more influential than families in shaping the thinking and values of the young.”

Parents “tend to entrust ever more to the ‘experts,’ even for the most delicate and personal aspects in [their children’s] lives,” the Holy Father said, according to Catholic World News. “And this is very serious!”

Thus “deprived of their role,” parents “become over-burdened and possessive of their children, never even correcting them.”

When he said a bad word to his teacher as a schoolboy, Pope Francis related, both his teacher and his mother corrected him. “Today, on the contrary, if a teacher does something like that, the next day either one or both parents will reproach the teacher because the experts say that children should not be corrected in that way.”

“It is evident that this approach is not good,” he said. “It is not harmonious, it is not dialogical, and rather than favoring the collaboration between families and other educational agents, it opposes them to one another.”

The pope also acknowledged the difficulties facing separated couples, but urged them not to criticize each other in front of their children, to “never, never, never take the children hostage.”

Pope Francis described “good family education” as “the backbone of humanism,” according to Zenit. “Its influence is the social resource that allows you to make up for the drawbacks, the wounds, the gaps of parenthood that affect less fortunate children. This influence can do real miracles. And in the Church these miracles happen every day.”

“May the Lord grant to Christian families the faith, the liberty, and the courage necessary for their mission!” the pope said in closing. “It is time for fathers and mothers to return from their exile, because they have self-exiled from the education of their children, and to fully reassume their educational role.”