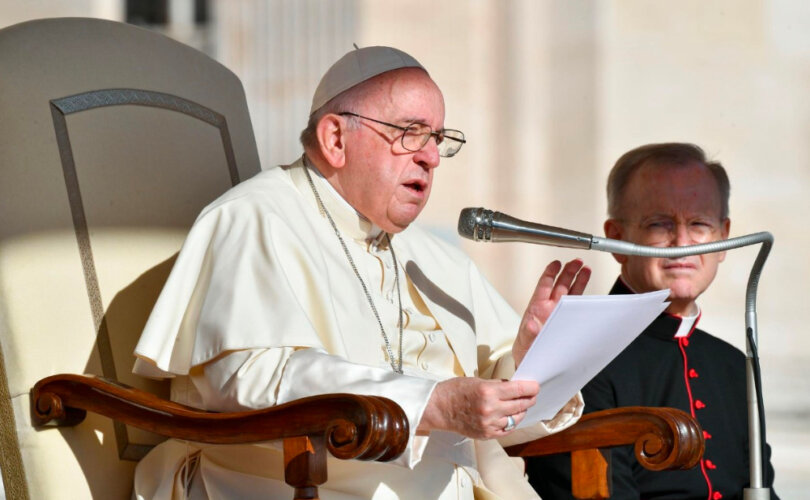 VATICAN CITY (LifeSiteNews) — Pope Francis has warned an influential, Vatican-based theological commission against “going backward” in “Tradition,” instead urging them to promote the Gospel by consulting non-Catholic “experts.”

The 85-year-old Pontiff made the comments Thursday to the International Theological Commission, a body of theologians set up by Pope Paul VI in 1969 to advise the Congregation (now Dicastery) for the Doctrine of the Faith (CDF).

Francis first highlighted how the Commission was to fulfil its task “in the wake traced by the Second Vatican Council, which – sixty years after its inception – constitutes the sure compass for the journey of the Church.”

Re-iterating his oft-repeated remarks against devotees of Tradition and the traditional Mass, Francis called the commission’s 30 members to practice a “creative fidelity to Tradition.” By doing so, said Francis, the theologians could work “for the progress of the apostolic Tradition, under the assistance of the Holy Spirit.”

“Tradition, the origin of faith, which either grows or dies out,” said Francis. “Tradition – I want to emphasize this – makes us move in this direction: from down up, vertical.”

#PopeFrancis warned the International Theological Commission (which advises the CDF) against “indietrists,” saying traditionalists “remain fixed in time.”
He also urged them to continue “inculturation of the Gospel” by “the consultation of experts, including non-Catholics.” https://t.co/AdlP3qhNPb pic.twitter.com/TkFua1g1aL

The Argentine Pontiff continued by making his trademark comments against traditional Catholics: “Today there is a great danger, which is to go in another direction: ‘indietrism.’ Going backward. ‘It has always been done this way’: it is better to go backward, which is safer, and not to go forward with tradition.”

Such a position, said Francis, “has moved some movements, Church movements, to remain fixed in a time, in a backward. They are the indietrists.”

He made reference to un-named movements which emerged after Vatican I which he observed had been “trying to be faithful to tradition, and so today they develop in such a way as to ordain women, and other things, out of this vertical direction.”

Francis criticized those who promoted “indietrism” which, he argued, “leads you to say, ‘That’s the way it’s always been done, it’s better to go on like this,’ and doesn’t let you grow. On this point, you theologians think a little bit about how to help.”

READ: Pope calls for an end to ‘intransigent defense of tradition’

— Article continues below Petition —
Join Bishops in calling out Pope Francis' statement for contradicting the faith
Show Petition Text
5976 have signed the petition.
Let's get to 6000!
Thank you for signing this petition!
Add your signature:
Show Petition Text

This is by no means the first time that Francis has made such remarks, appearing to single out Catholics devoted to the traditional Mass and criticising them for it.

On one such occasion the Pope suggested that those clerics who opt to don more traditional clerical garb, such as cassocks and clerical hats, possess a “rigid clericalism,” behind which there are “serious problems.”

ON “RIGIDITY” – WHY IS A PAINTING OF A NUDE JESUS MINISTERING TO JUDAS IN POPE FRANCIS’ STUDY?

However, while Francis has used the texts of St. Paul on one occasion to make such an attack on “rigidity,” it was St. Paul himself who wrote: “Therefore, brethren, stand fast; and hold the traditions which you have learned, whether by word, or by our epistle.” (2 Thessalonians 2:14)

Then, in his letter to Titus, St. Paul stipulated that bishops must faithfully adhere to the doctrine of the Church: “Embracing that faithful word which is according to doctrine, that he may be able to exhort in sound doctrine, and to convince the gainsayers.”

Offering a second guideline to the members of the Commission to continue their studies, Francis advised them to promote the Catholic faith by seeking the advice of those outside the Church.

The Pope spoke of the “appropriateness – in order to carry out with pertinence and incisiveness the work of deepening and inculturation of the Gospel – to open prudently to the contribution of the different disciplines through the consultation of experts, including non-Catholics, as provided for in the Statutes of the Commission.”

While he urged catechists to “give the right doctrine,” Francis told the ITC to “go further” than the “solid doctrine” as the magisterium will assume the role of informing the theologians when they have gone too far.

Reacting to yet another of the Pope’s attacks upon Tradition, Catholics were swift to rebuff his comments online. Henry Sire, a former Knight of Malta and author of The Dictator Pope, highlighted an apparent contradiction in the Pope’s words.

Regarding Francis’s idea of “backward-looking” as opposed to genuine tradition:

Definition of tradition: following the 2,000 year teaching of the Church.

Definition of backward-looking: insisting on a Council that took place between 1962 and 1965 as the only guide to doctrine. https://t.co/TNnB8C5o2x

In comments to LifeSiteNews, U.K. catechist Deacon Nick Donnelly responded to the recommendation to consult “non-Catholics” by questioning its wisdom.

Pope St John Paul II’s statutes for the International Theological Commission allowed for consultation with experts, including non-Catholics (Apostolic Letter, Tredecim Anni, 10). Whilst this allowed for a broad consultation, the wisdom of such a provision is questionable under the pontificate of Pope Francis where such ‘consultation’ is being given primacy.

Continuing, Donnelly summarized Francis’ increasingly heterodox activities with regard to Catholic doctrine. “Since 2013, he has appointed non-Catholic experts who, among other things, advocate eugenics, contraception, and abortion.”

“Pope Francis’ enthusiasm for non-Catholic experts goes so far as him advocating that the Church learns from pagan religions and ‘spiritualities’,” Donnelly said, before warning against such a practice:

The problem with drawing on the expertise of non-Catholic experts to help the Church proclaim the Gospel is that they have, de facto, rejected our Lord Jesus Christ’s institution of the Catholic Church as the ‘sacrament of salvation.’ Such a fundamental antagonism against the Church, and the intentions of our Lord Jesus Christ, surely taints any knowledge or advice they propose to the International Theological Commission.