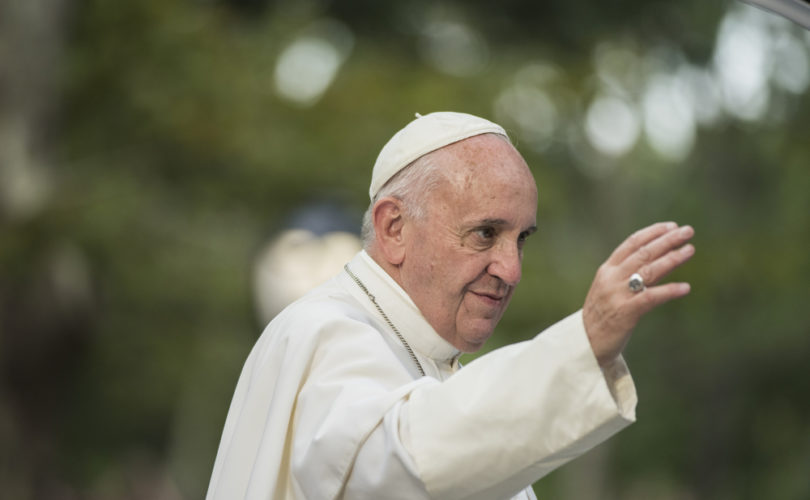 ROME, May 18, 2016 (LifeSiteNews) —Pope Francis has agreed to set up a commission to study the role of deaconesses in the early church, after a group of women religious asked him what prevents the Catholic Church from including women as permanent deacons.

The exchange took place during a May 12 meeting between the Holy Father and some 900 members of the International Union of Superiors General, a global umbrella group representing about 500,000 women religious in about 80 countries.

One of the questions the group posed the pontiff concerned “better insertion of women” in the Church, and focused on deacons.

“There is in the Church the office of the Permanent Deacon, but it is only open to men, whether married or not,” read the question, according to Zenit.org’s English translation of the Vatican’s transcription of the event.

“What impedes the Church from including women among the Permanent Deacons, precisely as happened in the early Church? Why not constitute an official commission that can study the question?”

“I think it will do the Church good to clarify this point: I agree and I will speak about doing something of this nature,” was part of the pope’s long answer.

Francis told the women he had discussed the role of deaconesses in the early and medieval Church with a Syrian theologian on visits to Rome before becoming pope, and learned that deaconesses would “help in the baptism of women, in the immersion, they baptized them for decorum, also to do the anointing of women’s body” during baptism.

“But what were these deaconesses? Were they ordained or no?” mused the pope, adding that the Council of Chalcedon in 451 was “a bit obscure” on the question.

“There are some publications on the Diaconate in the Church, but it’s not clear how it was,” Francis said. “I think I will ask the Congregation for the Doctrine of the Faith (CDF) to refer studies to me on this topic, because I have answered you only on the basis of what I’ve heard from that priest.”

He added: “Therefore, on the diaconate, yes, I accept and it seems useful to me that a commission should clarify this well, especially in regard to the early times of the Church.”

While there are as yet no details on the commission, Crux editor and veteran Vatican-watcher John Allen Jr. noted that Francis is “in earnest,” because the pontiff called Archbishop Angelo Becciu, the Substitute of the Secretariat of State, shortly after the meeting.

The “Holy Father has telephoned me, surprised about the … deaconesses!” Becciu tweeted May 13. “He thinks about a commission. Let us not rush the conclusions!”

The pope’s stated intention provoked a firestorm of speculation, which the Vatican moved to douse quickly.

“One has to be honest,” Holy See press office director Father Federico Lombardi told Vatican Radio on May 13. “The pope did not say that he had any intention of introducing ordination for female deacons, much less priestly ordination for women.”

The Catholic Church understands the diaconate as a sacrament of holy orders, below ordination to the priesthood and to the episcopate, and as such it can only be validly conferred on baptized men.

The International Theological Commission, a body of the CDF, concluded in a 2002 report that deaconesses of the early church were not the same as today’s deacons, and that the Church’s ecclesial tradition, particularly its magisterial teaching, underlines that the diaconate is an element of holy orders, writes Catholic Answers apologist Jimmy Akin.

The Church revived the permanent diaconate after Vatican II. Deacons, who can be married when ordained, can preach, officiate at weddings, funerals and baptisms, but cannot celebrate Mass or confession.

As the group of women religious noted to Francis, they too do many of these things: “Consecrated women work already very much with the poor and the marginalized, they teach catechesis, accompany the sick and the dying, distribute Communion, and in many countries lead the common prayers in the absence of priests, and in those circumstances deliver the homily.”

Germany’s Cardinal Walter Kasper, a key mover in pushing the Church on progressive causes like Communion for the ‘remarried’ and greater acceptance of homosexual unions, is also a longstanding supporter of deaconesses. He noted in 2013 that he envisioned a non-ordained women diaconate with “pastoral, charitable, catechetical and special liturgical functions,” wrote the National Catholic Register’s Edward Pentin.

Jesuit Cardinal Carlo Martini, the late archbishop of Milan and one of the most prominent progressives of his time, began campaigning for deaconesses shortly after Pope John Paul II confirmed definitively in 1994 that the Church cannot ordain women as priests, noted Pentin.

Martini’s suggestion that women deacons would contribute to ecumenism by “showing the presence and mission of women in all fields,” was backed up at the time by theologian Bruno Forte — who is now an archbishop and advisor to the pope, added Pentin.

More recently, at the Synod on the Family in October 2015, Canadian Archbishop Paul-Andre Durocher and German Benedictine Father Jeremias Schröder suggested the Church open discussion on the question of deaconesses.

“I think we should really start looking seriously at the possibility of ordaining women deacons,” Durocher told Catholic News Service at the time, “because the diaconate in the church’s tradition has been defined as not being ordered toward priesthood but toward ministry.”