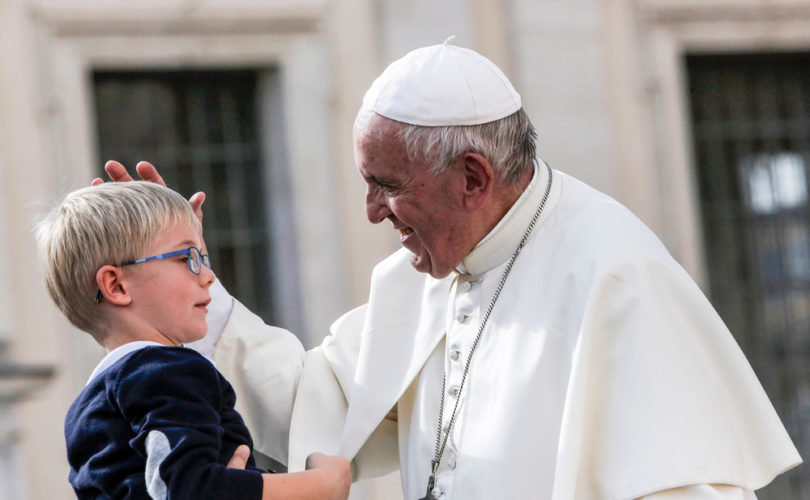 Pope Francis with a young childShutterstock

VATICAN CITY, May 5, 2021 (LifeSiteNews) — The Vatican has announced that Pope Francis will join politicians and journalists in addressing an Italian conference on the demographic crisis facing the nation, and the declining rate of births.

The Vatican’s Monday announcement noted that the Pope is to provide the opening address at the conference, for the General States of Birth, due to be held just outside the Vatican on May 14 at the Auditorium della Conciliazione.

The “Forum for Family Associations,” which organizes the conference, mentioned the “demographic winter” and the “empty cradles” which are being seen in Italy. The aim of the one-day event is to “launch an appeal for mutual responsibility to get the country moving again, beginning with new births.”

Referencing the decline in births, the Forum warned that the country could soon see a collapse of the “fundamental pillars” on which the nation is built.

The General States of Birth mentioned that 2020 had seen the continuation of a long trend of declining birth rates, with just over 404,000 births that year, which was a 3.8% drop from 2019, which had been the worst recorded year for births.

Italy has experienced a marked decrease in birth rates since 1950, with some statistical analyses putting the current birth rate at just 7.272 births per 1,000 people, compared to 18.607 in 1950.

Projections for the death rate look set to rise steadily over the coming years and decades, and new data is set to be published at the conference regarding the demographic statistics of the nation.

LifeSiteNews reported early last year on the troubling situation seen in Italy, noting that at that time it had just seen its lowest number of babies born, a statistic which was then repeated in 2020.

While Pope Francis is giving the opening address, he will be accompanied by a number of Italian politicians and journalists. Elena Bonetti, the minister for families and equal opportunities, along with Patrizio Bianchi, the minister for education, and Nicola Zingaretti, the president of the Lazio Region, will join the pontiff.

Journalists and, perhaps unexpectedly, athletes also comprise the line-up of speakers who are due to appear at the event.

The conference is occurring mere days after another Vatican conference, this time a multi-day event entitled “Exploring the Mind, Body & Soul.” It will be attended by abortion advocates such as Chelsea Clinton, as well as CEOs from abortion-tainted vaccine companies Pfizer and Moderna, the director of the U.S National Institutes of Health, and pro-abortion COVID-response czar Dr. Anthony Fauci.

The conference will be guided by the Pope’s ecological encyclical Laudato Si, and aims to look at how to shape the future of the planet and of humanity.

The Pope has given conflicting messages regarding birth rates and the growth of families. In 2015 he criticized the low birth rates in Europe as a whole, saying that children bring “joy, hope, also trouble,” but that “it’s better to have a society with these worries and problems than a sad and grey society because it has remained without children.

Children are a “great gift for humanity, but they are also greatly excluded,” said the Pope, adding that “a society can be judged by the way its children are treated.”

However, Pope Francis’ track record is confusingly mixed when it comes to the pro–life cause and abortion. He has previously presented some Catholic teaching regarding the immorality of abortion, albeit not always firmly or extensively.

At the same time, already in the first year of his pontificate, the Pope gave an interview in which he said that abortion was talked about too much in the Church.

“We cannot insist only on issues related to abortion, gay marriage and the use of contraceptive methods. This is not possible,” he said. “I have not spoken much about these things, and I was reprimanded for that.”

The Pope continued: “The dogmatic and moral teachings of the church are not all equivalent. The church’s pastoral ministry cannot be obsessed with the transmission of a disjointed multitude of doctrines to be imposed insistently.”

Then in a 2016 in-flight interview, the Pope famously attacked large Catholic families, saying, “God gives you methods to be responsible … Some think that, excuse me if I use that word, that in order to be good Catholics we have to be like rabbits. No. Responsible parenthood!”

That same year, the Pope abolished the pro-life declaration which members of the Pontifical Academy for Life previously had to support, and subsequently appointed members to the academy who supported abortion.

Despite complaining about the media mis-representing him, the Pope’s own actions seem to present a different stance on abortion than the one which he claims to hold in his letter. In 2016, he publicly praised and later privately met Italy’s former Italian Minister of Foreign Affairs, a leading abortion activist.

Most publicly, the Pope has sided with the United Nations (UN) and its 2030 Agenda for Sustainable Development, which is heavily pro-abortion. He expressed support for the U.N’s goals, despite them calling for “universal access to sexual and reproductive health care services, including for family planning, information and education, and the integration of reproductive health into national strategies and programs,” which includes contraception and abortion. Pro-life organisations at the U.N. have campaigned against the goals for years.

In fact, the pontiff even called for a “special legally constituted authority” in order to implement the “supranational” U.N. goals. He has repeatedly aligned himself with those goals, particularly in the area of climate change.

On December 8, Francis joined forces with global capitalists in a venture called “Council for Inclusive Capitalism with the Vatican” in order to promote a new “economic system” of capitalism based on the United Nations’ Sustainable Development Goals.

Not only this, but shortly after the media pre-emptively called the still undecided presidential election in favor of Joe Biden, the Pope called the pro-abortion candidate, “extending blessings and congratulations” to Biden. The Biden-Harris transition website reported that Biden expressed his desire to the Pope “to work together on the basis of a shared belief in the dignity and equality of all humankind on issues such as caring for the marginalized and the poor, addressing the crisis of climate change, and welcoming and integrating immigrants and refugees into our communities.”

Joe Biden has been very open about his express support for abortion as well as LGBT ideology. He recently called abortion an “essential health service” and wishes to enshrine abortion into federal law. Notwithstanding this, according to Biden, Francis has given him Holy Communion.

It remains to be seen what Pope Francis will say at the upcoming conference addressing Italy’s declining population, when he has historically given such mixed messages about promoting the growth in population.