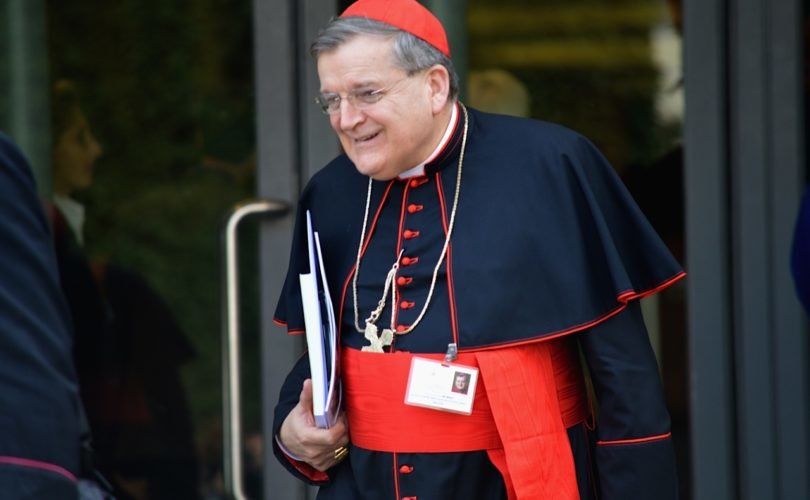 ROME, January 31, 2017 (LifeSiteNews) — A vehement backlash following attempts to fight condom distribution has shaken the foundations of the formerly sovereign entity of the Order of Malta. The controversy has resulted in one key casualty: Fra’ Matthew Festing, Grand Master of the Sovereign Military Order of Malta (SMOM), has surrendered. The optics are not good. By requesting his submission, Pope Francis has “publicly humiliated a Catholic knight for upholding moral orthodoxy,” as the Wall Street Journal put it.

LifeSiteNews has also learned that the man at the center of the controversy, previously ousted for being responsible for the scandalous contraceptive distribution, has been reinstated by the Pope with even more authority than he previously had.

On January 25 SMOM communicated that Fra Matthew Festing, 67, met with Pope Francis and decided to resign upon the Pontiff’s request. The Vatican has since announced the sending of a delegate to govern the Order together with the ad interim chief, Fra’ Ludwig Hoffmann von Rumerstein. Von Rumerstein will be in place until an extraordinary meeting elects a new Grand Master, as a press release dated January 28 stated.

Festing handed in his resignation after the General Council voted narrowly in favor of his decision and thereby ended his eight year governance of the world’s largest chivalric order. With his resignation he effectively surrendered in the struggle between the two oldest diplomatic entities in the Western world – a struggle sparked by the dismissal of Albrecht v. Boeselager, Grand Chancellor, before Christmas. The resignation of Fra’ Matthew promises to pave the way for an investigation of the order and further purging of unwanted elements; presumably those who are not in line with the re-instituted Boeselager. As veteran Vatican reporter Edward Pentin reports, the Vatican applied “very strong and direct pressure” on the Council while being unsure if the resignation would actually receive a majority.

But Festing’s head may not be the only one to roll. According to Edward Pentin, Pope Francis received Fra’ Matthew Festing in a private audience on January 24. In this audience, the Pope asked the Grand Master to write up a letter of resignation on the spot in which Festing included – by request – that the Grand Master had asked for Boeselager’s dismissal as ‘pushed for’ by Cardinal Raymond Burke, the patronus of the Order. As patronus Burke has no direct authority to govern but serves as the Pope’s ambassador to the sovereign council of the SMOM. Will the “removal” of Boeselager be “traced” back to Burke and will the Cardinal suffer punishment for his counsel?

It is curious to observe that Boeselager has been given unprecedented powers which are neither in the statutes of the Order nor that he had before his dismissal. In a letter Pope Francis announced that he will “nominate a special delegate” and he reiterated that all “acts of Fra’ Matthew Festing” are “null and void” – as a letter by Cardinal Parolin, Secretary of State of the Vatican, already stated. Francis added that “Baron von Boeselager is considered a member of the Sovereign Council and from that moment on must be invited to all reunions of the Council, in a contrary case the reunion would be null.” Boeselager thus becomes a “guarantor” of the validity of the Council, in effect putting the very person who originally defied the Grand Master’s wishes in charge.

Another element is the Pope’s involvement. It was by the Pope’s recent exhortation to “rid the Order of Freemasonry” in combination with the long-standing condom scandal, which Boeselager was involved in as Grand Hospitaller, that had led the Grand Master to ask Boeselager to resign before Christmas. Boeselager – obstinate in his refusal – had to be asked under obedience to leave, and this set the stage for an onslaught extraordinaire on the government of the Order. All of this culminated in that moment wherein the Sovereign Council voted to accept Fra’ Festing’s resignation. As leader of the sovereign Vatican, the Pope has gotten himself mixed up into international diplomatic affairs, that can “under international law” be understood as “effectively the annexation of one country by another,” canon lawyer Ed Condon wrote. The interference of Cardinal Secretary of State Pietro Parolin with his letter dated January 25 has been deemed unconstitutional.

Another distressing observation is this: If by his request for Fra Matthew’s resignation the Pope treated Festing as a religious rather than a statesman, Francis as supreme leader of the Church and vicar of Christ urged Festing under religious obedience to do precisely that which Festing had asked from v. Boeselager. With one difference: Boeselager never stepped down by his own accord despite grounds for morally questionable evidence; Fra’ Matthew Festing on the other hand did indeed have the integrity to follow his “superior,” the Pope. With the reinstitution of Boeselager, noncompliance wins the day.

What remains unresolved and concealed is the mysterious donation of 120 million Swiss Francs held in a trust accessible to Boeselager’s faction from a benefactor resident in France, as Edward Pentin reported, as well as German Cardinal Reinhard Marx’s involvement in the whole ordeal. According to information gathered by LifeSiteNews, Marx was visiting Cardinal Pietro Parolin along with Boeselager during his stay in Rome for the C9 meeting before Christmas to engage in the discussion with Cardinal Pietro Parolin.

What is plain to see is that Boeselager’s reinstitution means triumph for the small group of the German chapter of the Order who hold the money whip over the law and statutes of the Order. As so often in the recent Church history of the German-speaking world, it remains true that involvement in scandals – even as grave as condom-distribution – can be swept under the carpet if money is at stake. Boeselager’s term as Grand Chancellor will come to its natural end in 2019. Until then he has been given the time, stature and means to steer the Order his way.

Long gone are the days in which the Pope in respectful distance re-affirmed the sovereignty of the Order, as did Benedict XVI only days before his resignation: “The occasion that brings us together is the ninth centenary of the solemn privilege Pie Postulatio Voluntatis of 15 February 1113, by which Pope Paschal II placed the newly created ‘hospitaller fraternity’ of Jerusalem, dedicated to Saint John the Baptist, under the protection of the Church, and gave it sovereign status, constituting it as an Order in church law, with the faculty freely to elect its superiors without interference from other lay or religious authorities.”