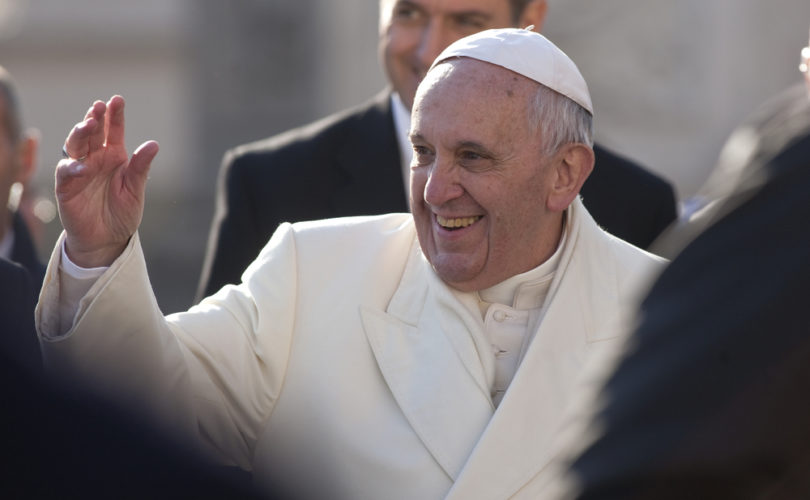 PHILADELPHIA, PA, August 5, 2015 (LifeSiteNews) — Pope Francis is urging American Catholics facing an unprecedented cultural and political assault on marriage to continue to “bear witness” to marriage as a “life-long covenant of love and fidelity between a man and a woman.”

“Elevated by the Savior to the dignity of a sacrament, marriage is, in the Creator’s plan, a natural institution, a life-long covenant of love and fidelity between a man and a woman, directed to their perfection and sanctification, and to the future of our human family,” said the pope.

“Today, when the institution of marriage is under attack from powerful cultural forces, the faithful are called to bear witness to this basic truth of biblical faith and natural law, which is essential to the wise and just ordering of society,” he communicated in a letter to the Knights of Columbus on the occasion of their 133rd Supreme Convention in Philadelphia, Pennsylvania. The message was addressed to the Supreme Knight Carl Anderson and was signed on the pope’s behalf by the Vatican’s Secretary of State, Cardinal Pietro Parolin.

“Today, when the institution of marriage is under attack from powerful cultural forces, the faithful are called to bear witness to this basic truth of biblical faith and natural law.”

The Holy Father expressed his “deep appreciation” to the Knights for their “steadfast public witness which your Order has borne to our Christian understanding of marriage and the family.”

Quoting the Book of Revelation about keeping the “commandments of God” and holding fast to “faith in Jesus,” the pope urged American faithful to meet the “moral, social and political challenges of the present hour” with “great wisdom and perseverance.”

Commenting on the theme of this year’s Supreme Convention — “Endowed by their Creator with Life and Liberty” — Pope Francis stated that American Catholics have a “duty” to “contribute to the reasoned defense of those freedoms on which their nation was founded.”

“The cornerstone of these is religious freedom, understood not simply as the liberty to worship as one chooses, but also, for individuals and institutions, to speak and act in accordance with the dictates of their conscience,” he communicated.

The message is timely with the U.S. Supreme Court’s recent decision rewriting the definition of marriage to include same-sex couples, a move that is widely anticipated to have ruinous consequences for religious freedom.

The pope called for mobilization of the faithful.

“To the extent that this [religious freedom] right is menaced, whether by invasive public policies, or by the growing influence of a culture which sets alleged personal rights above the common good, there is need for a mobilization of consciences on the part of all those citizens who, regardless of party or creed, are concerned for the overall welfare of society,” he said.

Pope Francis will be in Philadelphia next month for the Eighth World Meeting of Families.