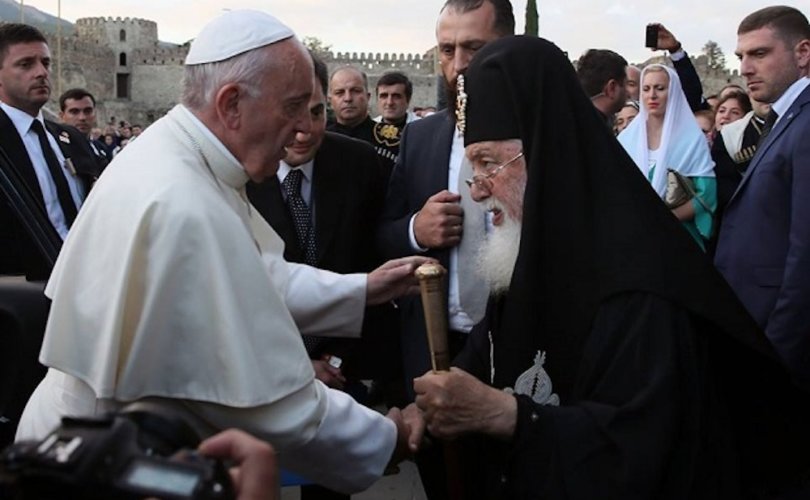 GEORGIA, October 4, 2016 (LifeSiteNews) — It is a “very grave sin against ecumenism” for Catholics to try to convert Orthodox Christians, Pope Francis said during the second day of his trip to the Eurasian country of Georgia.

“Let the theologians study the abstract realities of theology,” the pontiff said. “But what should I do with a friend, neighbor, an Orthodox person? Be open, be a friend. ‘But should I make efforts to convert him or her?’ There is a very grave sin against ecumenism: proselytism. We should never proselytize the Orthodox! They are our brothers and sisters, disciples of Jesus Christ.”

More than 1,000 years ago, the Orthodox split from the Catholic Church, arguing that the bishop of Constantinople, not the pope, should be recognized as the supreme pontiff. The Orthodox and Catholic Churches agree on many doctrinal and liturgical matters, but they disagree about the nature of God — specifically, whether the Holy Spirit proceeds from the Father and the Son.

Pope Francis’ words seemingly contradict what the Catholic Church teaches about salvation and Jesus Christ’s command to “Go, therefore, and make disciples of all nations, baptizing them in the name of the Father, and of the Son, and of the holy Spirit, teaching them to observe all that I have commanded you” (Matthew 28:19-20).

Ecumenism is an often vaguely-defined term that can refer to anything from similarities-focused dialogue that helps bring participants into full Communion with the Catholic Church to a muddy version of interfaith cooperation that seemingly denies significant denominational, doctrinal, or religious differences.

Whether it would actually be possible for someone to “sin against ecumenism” is unclear given how vaguely the term is defined and how it is often used to give the impression that there is no command of Jesus Christ for all mankind to enter the Catholic Church, and that not being a member of the Catholic Church is not a serious obstacle to salvation. The Catholic Church teaches “Sin is an offense against reason, truth, and right conscience; it is failure in genuine love for God and neighbor caused by a perverse attachment to certain good” and that every sin is ultimately an offense against God (CCC 1849 – 1850).

The Catholic Church teaches that it is the one true religion and Catholicism is the ordinary means of salvation (John 14:6; The Second Vatican Council’s Decree on Ecumenism, Chapter 1, part 23; CCC 846). However, it acknowledges that there can be elements of truth in other religions, such elements are true insofar as they are in line with Catholic teaching. “All these blessings come from Christ and lead to him, and are in themselves calls to ‘Catholic unity,’” the Catechism explains (CCC 819).

“Christ bestowed unity on his Church from the beginning,” the Catechism continues. “This unity, we believe, subsists in the Catholic Church as something she can never lose, and we hope that it will continue to increase until the end of time … the Church must always pray and work to maintain, reinforce, and perfect the unity that Christ wills for her … The desire to recover the unity of all Christians is a gift of Christ and a call of the Holy Spirit” (CCC 820).

Throughout history, popes and saints have stressed the importance of evangelizing non-Catholics. Until the 1960s, Catholics prayed every Good Friday for the conversion of “pagans,” “for heretics and schismatics: that our Lord God would be pleased to rescue them from all their errors; and recall them to our holy mother the Catholic and Apostolic Church,” and for the conversion of Jews.

In his February 2010 address to the hostel of Caritas in the Termini station of Rome, Pope Emeritus Benedict XVI said, “The witness of charity … is part of the Church’s mission, together with the proclamation of the truth of the Gospel.”

In his 1928 encyclical Mortalium animos, Pope Pius XI wrote Catholics cannot accept “that false opinion which considers all religions to be more or less good and praiseworthy, since they all in different ways manifest and signify that sense which is inborn in us all, and by which we are led to God and to the obedient acknowledgment of His rule. Not only are those who hold this opinion in error and deceived, but also in distorting the idea of true religion they reject it, and little by little turn aside to naturalism and atheism, as it is called; from which it clearly follows that one who supports those who hold these theories and attempt to realize them, is altogether abandoning the divinely revealed religion.”

“ … since charity is based on a complete and sincere faith, the disciples of Christ must be united principally by the bond of one faith … in what manner, We ask, can men who follow contrary opinions, belong to one and the same Federation of the faithful?” Pope Pius XI continued. “ … The union of Christians can only be promoted by promoting the return to the one true Church of Christ of those who are separated from it, for in the past they have unhappily left it. To the one true Church of Christ, we say, which is visible to all, and which is to remain, according to the will of its Author, exactly the same as He instituted it.”

“He cannot have God as a father who does not have the Church as a mother,” St. Cyprian of Carthage wrote.

Pope Leo XIII echoed this when he wrote in his 1896 encyclical Satis cognitum that everyone should become a child of God by taking “Christ Jesus as their Brother, and at the same time the Church as their mother.”