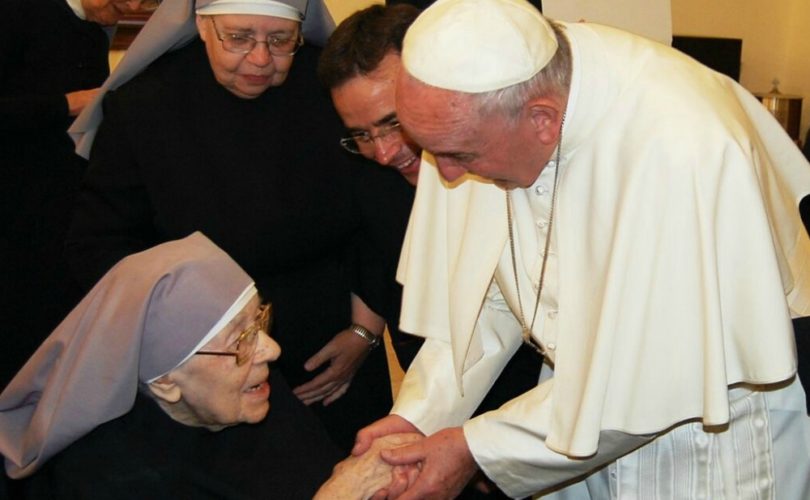 WASHINGTON, D.C., September 24, 2015 (LifeSiteNews) — In a move the Vatican said was a message from Pope Francis in the battle for religious liberty in the U.S., the Holy Father made an unplanned stop to the Washington D.C. convent of the religious sisters at the center of one of many lawsuits against the Obama administration over its HHS contraception mandate.

The Holy Father visited the Little Sisters of the Poor Wednesday after earlier in the day calling for protection of religious freedom in his welcome address at the White House.

The Little Sisters is an international religious community of nuns that operate group homes and provide daily care for the elderly poor in 30 U.S. cities.

The sisters’ refusal to compromise their Catholic values by providing contraception and abortifacients to their staff as required with the Obamacare mandate and resulting continued legal fight for a mandate exemption, rejected because they don’t exclusively employ Catholics and they serve people of all faiths, has made them an example of the attack on religious freedom in the U.S.

Contraception, sterilization, and abortion all violate Catholic Church teaching, but Obamacare requires employers to provide these as healthcare “services” to their employees without a co-pay. The Sisters have argued that the law's exemption isn't sufficient, since it means they would simply be signing the coverage away to another party.

Pope Francis’ visit to the United States has been the subject of intense speculation for months over what messages he would choose to concentrate on while in the U.S., and his unscheduled visit to the Little Sisters is being regarded as sending a message regarding religious liberty.

“This is a sign, obviously of support for them,” said Jesuit Father Federico Lombardi, head of the Holy See Press Office. “In this sense it is connected also to the words that the Pope has said in support of the Bishops of the United States in the speech to President Obama.”

“This was a little addition to the program,” Father Lombardi continued in a Vatican Radio report, “but I think it has an important meaning in this moment.”

The visit was brief, with Pope Francis spending about 15 minutes shaking hands and speaking with each one of the sisters in their chapel, said Becket Fund senior counsel Mark Rienzi, lead attorney for the Little Sisters.

Pope Francis told the sisters at the gathering how their work is important and how ministry to the elderly is frequently overlooked, Rienzi said in a report from the Washington Post, with one nun he spoke with saying she did not hear the Holy Father bring up the lawsuit during the discussion.

“The Holy Father spoke to each of us individually, from the youngest postulant to our centenarian, and then he spoke to all [of] us about the importance of our ministry to the elderly,” Sister Constance Veit, communications director for the Little Sisters, said in a statement. “We were deeply moved by his encouraging words.”

The Little Sisters first filed suit against the Obamacare mandate in 2013. But the Obama administration denied them a waiver because the nuns did not meet its standard for a religious exemption.

The administration demanded the nuns comply in January 2014 even after the Supreme Court gave them an injunction temporarily protecting them from the mandate.

The United States Conference of Catholic Bishops awarded them its 2014 People of Life Award for their stand against the administration’s abortifacient and contraceptive Mandate.

In July of this year, the U.S. Court of Appeals for the 10th Circuit ruled that the Little Sisters must comply with the contraception requirement. The sisters then appealed July 23 to the Supreme Court.

Then in August, the same court granted them a stay to protect them from the mandate’s prescribed fines, which would bankrupt their U.S. ministry, while their case is on appeal with the high court.

In a largely unprecedented move less than a month later, five 10th Circuit judges dissented in a September 3 opinion severely critical of their court’s refusal to correct its July 14 decision forcing the Little Sisters to take part in what’s been called the federal government’s contraception distribution “scheme.”

The five judges called the decision against the nuns “clearly and gravely wrong—on an issue that has little to do with contraception and a great deal to do with religious liberty,” and also said, “it is not the job of the judiciary to tell people what their religious beliefs are.”

The Supreme Court is expected to decide in October or November whether to take the Little Sisters’ case.