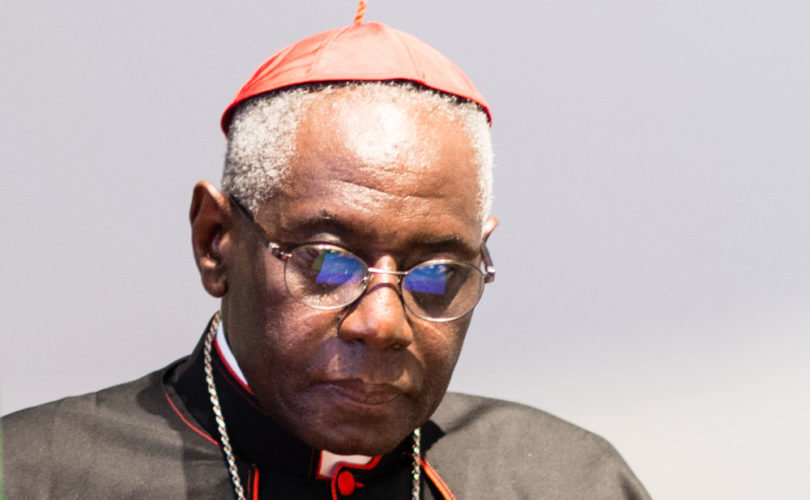 (LifeSiteNews) — Cardinal Robert Sarah, the former head of the Vatican’s Congregation for Divine Worship, said Pope Francis does not wish to “abolish” the Latin Mass, but merely to celebrate it “in the spirit of Vatican II.”

“I believe that Pope Francis has clearly explained his intention in the various ad limina visits of the French and Polish bishops,” began Sarah, who served as Prefect for the Congregation for Divine Worship and the Discipline of the Sacraments from 2014 through 2021.

“His aim is not at all to abolish the ancient liturgy,” claimed Sarah. “He [Pope Francis] is aware that many young people and families are intimately attached to it. And he is attentive to this instinct of faith that is expressed in the people of God.”

Sarah further added that he did not believe the Pope viewed the “attachment” to the traditional Mass as “a nostalgia of the elderly.”

Seeming to ignore the Pope’s firm tone in the motu proprio, the 76-year-old prelate said Francis had asked for Traditionis Custodes to be “applied with flexibility and a paternal sense.”

“He is well aware that what has been sacred for so many generations cannot be scorned and banished overnight,” said Sarah. “On the contrary, I believe that the Pope expects the present liturgy to be enriched by the best of the ancient liturgy. He also clearly expects the ancient liturgy to be celebrated in the spirit of Vatican II, which is perfectly possible. It is not and must not become a pretext for the protesters of the Council.”

Despite Sarah’s claim of the Pope’s benign intentions, Pope Francis explicitly stated in Traditionis Custodes that the Novus Ordo is “the unique expression of the lex orandi of the Roman Rite.” He added that Pope John Paul II’s 1988 motu proprio giving some legal status to the Latin Mass, Ecclesia Dei, was done simply to “foster the healing of the schism with the movement of Mons. Lefebvre.”

Speaking to LifeSiteNews, liturgy scholar and Thomistic theologian Dr. Peter Kwasniewski described Sarah’s comments as “an impossible reading of the text of Traditionis Custodes and especially of Archbishop Roche’s semi-authoritative interpretations of it, not to mention Cardinal Cupich who has been given a seat at the Vatican media table.”

“Cardinal Sarah specializes in making lemonade out of lemons, but he should know better by now, after all the times he has been slapped down even when he has recommended practices consistent with the new missal, let alone the use of the old,” added Kwasniewski.

“The routine is getting tiresome, and is damaging to the faithful, who deserve to hear the truth and to see a man of His Eminence’s reputation articulating it and defending it.”

Cardinal Sarah had been viewed as a “conservative” in liturgical preferences, with Pope Benedict XVI even stating that “with Cardinal Sarah, a master of silence and of interior prayer, the liturgy is in good hands.”

Speaking at a liturgy conference in 2016, Sarah suggested that the Fathers of the Second Vatican Council intended liturgical reform to bring more of the faithful to the Mass, yet for the most part the effort has failed.

“My brothers and sisters, where are the faithful of whom the Council Fathers spoke?” he asked. “Have we made real progress in calling the whole of mankind into the household of the Church? I do not think so. And yet we have done very much to the liturgy!”

Sarah also expressed his “profound grief” at the “many distortions of the liturgy throughout the Church today,” including using extraordinary ministers instead of priests and deacons to distribute Communion, and proposing that the “Eucharist is too great a gift to tolerate ambiguity and depreciation.”

Since Pope Francis’ pontificate began, Sarah has often come into conflict with the pontiff on liturgical matters, before his resignation was accepted by the Pope earlier this year.

The cardinal was replaced by Archbishop Arthur Roche, described at the time as presenting a “real and present danger” to Pope Benedict XVI’s Summorum Pontificum. Roche has called it an “ecclesiastical duty” to implement the Novus Ordo, criticizing how the Extraordinary Form did not promote the community celebration by the laity, and how the Extraordinary Form had “the priest alone as celebrant.”