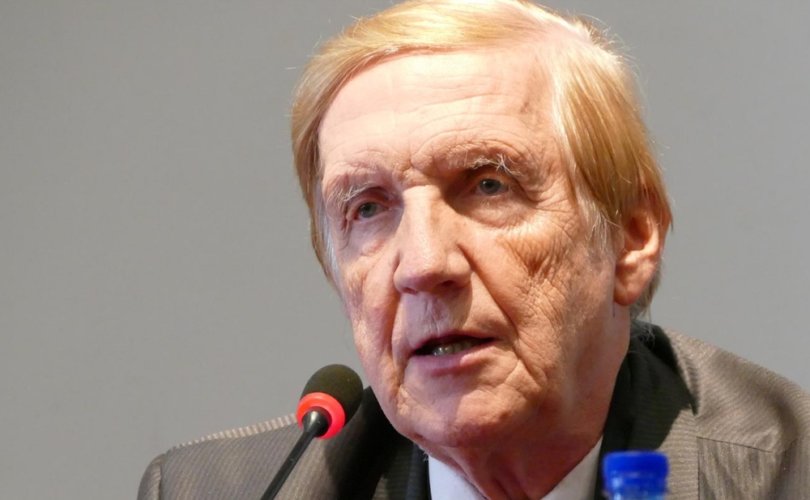 July 17, 2018 (LifeSiteNews) — If Pope Francis consents to any deviation from the teaching of Humanae Vitae — in any way allowing contraceptive use or denying the intrinsic evil of that use — he would be endorsing “a total ethical error and a huge heresy,” renowned Catholic philosopher Josef Seifert said.

The doctrine expressed in Blessed Pope Paul VI’s landmark encyclical, which reinforces the Church’s perennial teaching on the intrinsic immorality of artificial birth control, cannot be changed, Seifert and other theologians said.

The president of the new John Paul II Academy for Human Life and the Family and personal friend of the late St. John Paul II, Seifert was one of a number of scholars contacted by the National Catholic Register to weigh in on a recent ongoing push to “reinterpret” or revise Humanae Vitae. Each ruled out that the doctrine of Humanae Vitae could ever be altered.

“Doctrine that has been definitively proclaimed cannot be changed either in the sense of denying or contradicting what has been taught, or by asserting what is incompatible with such truth,” said Father George Woodall, professor of moral theology at the Pontifical Regina Apostolorum Athenaeum in Rome.

“If there were to be an ‘authentic development of doctrine,’” Woodall said, “this would neither entail nor imply any of these possibilities, but would deepen some particular point of prior doctrine, maintaining that doctrine intact.”

Those who suggest such doctrinal development must then show that whatever they propose does not violate this principle and is thus also compatible with “constant definitive doctrine.”

Seifert made note for the Register that Father Maurizio Chiodi, a new member of the Pontifical Academy for Life, had failed in this regard.

A radical break with Church teaching

Earlier this year, Chiodi, a professor of moral theology at the Northern University of Italy in Milan, disputed the Church’s teaching that contraception use was intrinsically evil and argued for contraceptive use in some instances, saying it would be an act of “responsibility.” Chiodi drew his argument from Amoris Laetitia.

“If the Pope were to accept these changes, he would accept a total ethical error and a huge heresy,” he said. “Any Catholic should pray that the Pope will reject this ‘new paradigm’ that is nothing else than an old ethical error and the very destruction of the moral teaching of the Church.”

Seifert said an example of an acceptable development or explanation of doctrine would be to demonstrate that separating the procreative and unitive meaning of the marital act is not the only reason contraception use is wrong, and other reasons showing its immorality need to be developed.

“This would be no change of Humanae Vitae’s teaching, and even less a change of the eternal truth it proclaims,” he said, “but a complementation and completion of its argumentation for the inviolable truth that contraception is intrinsically wrong.”

The question of what new understandings could be acceptably gleaned from Humanae Vitae was also posed to Opus Dei Father Robert Gahl, associate professor of ethics at the Pontifical University of the Holy Cross in Rome.

“The Church’s teaching must always respect and confirm the truth about spousal love as that kind of friendship that is inherently open to new life,” Gahl said. “But new explanations and new pastoral programs may develop the doctrine, not by changing it, but by clarifying it, and offering new paths for conformance to that same doctrine.”

The Register’s Edward Pentin listed numerous reasons in the article that have caused concern that Humanae Vitae’s teaching is in jeopardy.

These include the pope appointing open dissenters from Humanae Vitae to the Pontifical Academy for Life — following his emptying of previous Academy members who support the Church’s teaching on contraception and life – a clandestine Vatican commission established by Francis to reinterpret Humanae Vitae in the light of his controversial exhortation Amoris Laetitia, and also Francis having praised German moral theologian Bernard Häring, one of the most major influential dissenters against Humanae Vitae at the time of its release, for his searching “for a new way to help moral theology to flourish again.”

In addition to these was Avvenire chief editor Luciano Moia’s publication in June of 10 “inconvenient points” regarding the results of the 2014-15 Synods on the Family.

Moia, another dissenter from Humanae Vitae, had asserted among other things in his list that Paul VI himself did not want a declaration of infallibility for the document, that the overwhelming majority of practicing no longer use “natural methods” for family planning and that the contraception issue has for most couples a decreasing relevance ethically.

He also declared that the crucial point of Humanae Vitae was the “indissoluble relationship between conjugal love and fecundity.” Humanae Vitae defenders argue the inseparability tenet pertains not to the indissoluble connection between marital love and fruitfulness, rather between the marital act and couples being open to the creation of a new human life.

“This is crucial,” Kampowski said, quoting from Humanae Vitae 14, which underscores the “unitive significance and the procreative significance which are both inherent to the marriage act,” and which “man on his own initiative may not break.”

As Humanae Vitae’s 50th anniversary approaches later this month, the theologians told the Register given the extensive dissent from the document since its release that the most longed-for and acceptable change regarding Humanae Vitae would be having its contents taught effectively — beginning with bishops and priests.

“Many bishops, like many priests and others at the time of Humanae Vitae and since, have perhaps never read the text of the encyclical fully or attentively or often do not understand it,” said Woodall.

“Too many” bishops and priests were “left ‘at sea’ and never received any sympathetic explanation” of the encyclical’s teaching, he said further, “or they allowed themselves to be swept along by media pressure and public opinion.”

Kampowski said, “The greatest need for development with respect to the message of Humanae Vitae lies with teaching it repeatedly and with confidence.”

Woodall said certain elements could be better taught, for instance the fact that Humanae Vitae did not condemn only “artificial” contraception but also any act that may “operate in such a way that procreation may be impeded.” The word “artificial” has been badly translated from the Latin, he said, and the word “deliberately” would be a more correct version.

Seifert said it would be “permissible and good” to explain more of what Humanae Vitae means by “the generous openness to new life,” and that a “normal parental attitude” should mean “leaving it wholly to God how many children he wants to give us.”