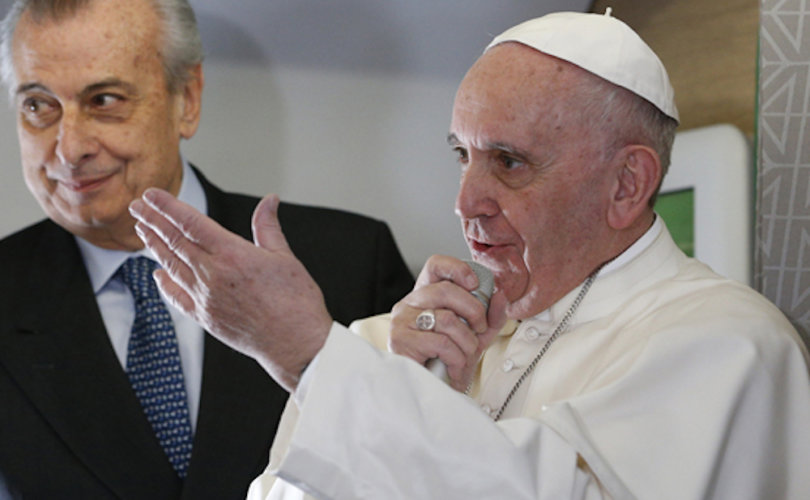 ABOARD THE PAPAL PLANE, May 15, 2017 (LifeSiteNews) – Pope Francis said he will not try to convert U.S. President Donald Trump on man-made “climate change” and illegal immigration when the two meet later this month. The pope said he will focus instead on common ground between them.

The pontiff said as well that he never judges a person without hearing them out.

“I never make a judgment about a person without listening to them,” Pope Francis said. “I believe that I shouldn’t do this.”

The comment came on the plane ride back from Fatima, Portugal, over the weekend when an NBC journalist asked the Holy Father his opinion of Trump’s policies on “the need to act regarding global warming or on welcoming migrants.” It was posed on the premise of Trump being a “head of state who seems to think and act unlike” the pope.

“Things will come up as we talk,” Pope Francis continued. “I will say what I think; he will say what he thinks. But I never, I have never wanted to make a judgment without listening to a person.”

Pope Francis coined the now infamous “Who am I to judge?” phrase, also on the papal plane, early in his pontificate in regard to a priest serving in the curia accused of homosexual conduct. The expression has been exploited ever since to advance LGBT “rights” and to censure the Church’s teaching on homosexuality or those who uphold it.

At the same time, the pope has made innumerable negative statements about “rigid” or “fundamentalist” Catholics.

The pope and Trump have had somewhat of a verbal sparring in the media over the two issues on which they clearly don’t agree.

Trump’s success in the election has been attributed in part to his promise to protect Americans’ security, and in particular build a wall on the U.S. border with Mexico to help curb the tide of illegal immigration and shore up that option for entry by terrorists.

Pope Francis inferred during the U.S. presidential campaign that then-candidate Trump was not Christian because of his proposal to protect America by building a wall on its southern border.

“A person who only thinks about building walls, wherever they may be, and not building bridges, is not Christian,” the pope said at the time.

Trump had responded in a statement via his campaign website, “No leader, especially a religious leader, should have the right to question another man's religion or faith.”

Then, in a speech given at the Vatican three days before the U.S. election, Pope Francis said Christians should not give in to the politics of “fear” by building “physical and social walls.”

On the day of Trump’s inauguration, the pope also warned against the rise of such populist leaders as Adolf Hitler, stating that “Hitler didn't steal power, his people voted for him, and then he destroyed his people.”

The Vatican's deputy secretary of state, Archbishop Angelo Becciu, had said in February there was “worry” over Trump’s immigration actions, after Trump signed the first of two executive orders temporarily banning travel from a handful of Muslim-majority countries. Several U.S. bishops were sharply critical of travel ban.

Trump is skeptical of so-called man-made “climate change,” and signed an executive order negating much of the Obama administration’s environmental legislation.

Conversely, Pope Francis has promulgated an entire encyclical on “climate change,” accepting it as real and chiefly “a result of human activity.”

Trump and Pope Francis are set to meet in the morning on May 24 in the Apostolic Palace, just before the pope’s Wednesday audience.

Aleteia provided a translation of the official transcript of the interview on the plane this past Saturday, specifically the questions surrounding the upcoming meeting between the Holy Father and Trump.

The pope said in regard to Trump that common ground could always be found.

“There are always doors that are not closed,” he said. “One needs to look for the doors that are at least a little open, enter in and speak about common matters, and go forward.”

He referred to the process as walking together to develop respect.

“Friendship among people, getting to know one another, and esteem are also a craft,” he continued. “They are made every day. Respect for the other, saying what one thinks but with respect, walking together … Someone thinks about it in a certain way … say that, be very sincere in what each person thinks.”

Thomas Williams pointed out in a Breitbart piece how Trump and the pope are actually coming into the meeting with common ground on numerous other issues besides the two Pope Francis was asked about on the plane.

They both oppose abortion and euthanasia, Williams said, and defend religious liberty and conscientious objection. Both also stress job creation, support the traditional family, and both have spoken strongly in defense of persecuted Christians in the Middle East and elsewhere.

When the pope was asked on the plane whether he thought Trump would “soften his decisions” on “climate change” and immigration after their meeting, the pope said again he would not proselytize.

“This is a political calculation that I do not allow myself to make,” Pope Francis said. “Even on the religious level, I am not one to proselytize. Thank you.”