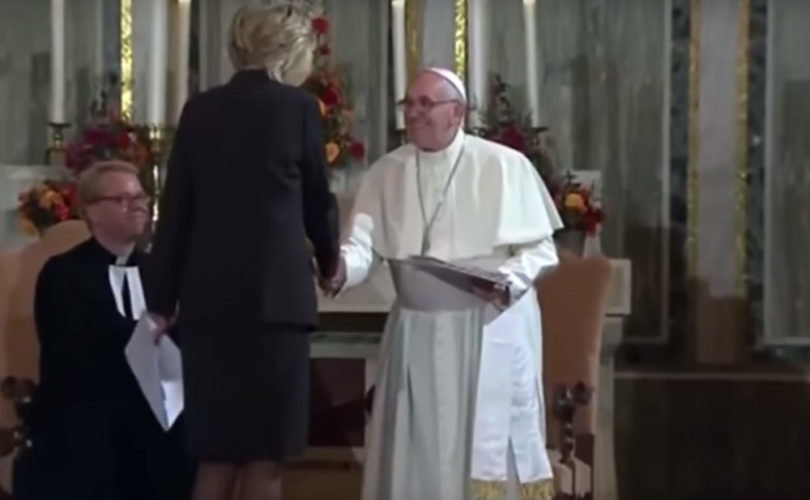 Pope Francis greets a Lutheran woman moments before suggesting she could 'go forward' to Holy Communion.

ROME, November 20, 2015 (LifeSiteNews) — In a speech to a gathering of Lutherans Sunday, Pope Francis told a Lutheran woman asking about receiving Communion with her Catholic husband to “go forward” guided by individual conscience.

Though not Magisterial, it nevertheless appears that Pope Francis is indicating disagreement with the Church’s traditional teaching against intercommunion. The comment is one of his most explicit on-the-record endorsements of a more liberalizing approach as to who may receive Holy Communion in the Catholic Church. According to one anonymous source close to the Vatican, speaking to the National Catholic Register, the comment was a “crossing the Rubicon moment” that is “mocking doctrine.”

The pope’s remarks have intensified anticipation that he will reverse the Church’s prohibition on admitting remarried divorcees living in adultery to Holy Communion in his post-Synodal apostolic exhortation.  Moreover, with the pope’s personal appointee to the Synod and widely-touted favored American son – Chicago Archbishop Blase Cupich – having proposed an openness to homosexual couples also being able to receive Communion, the pope’s position even on that front is left to speculation.

The pope began his answer to the Lutheran woman evoking laughter and applause as he said, “The question on sharing the Lord’s Supper isn’t easy for me to respond to, above all in front of a theologian like Cardinal Kasper – I’m scared!” Cardinal Walter Kasper, the man responsible for the initial suggestion to allow Communion for remarried divorcees, accompanied the pope on his visit to the Lutheran church.

Concluding his remarks, the pope said:

Though some have taken the remarks as “pastoral,” well-known blogging priest and former Anglican Father Dwight Longenecker questioned them on this ground.  “It is very nice of the Holy Father to be kind and welcoming to the Lutheran wife of the Catholic, but there is another side to the question,” he wrote on his blog. “He is being very pastoral to the Protestant but how pastoral is he being to those of us who convert to the Catholic faith?”

“Some of us have given up virtually everything to convert to Catholicism,” he added. “We have given up careers, homes, family and future and entered the Catholic Church as simple supplicants. We have made great sacrifices for church unity. When a Catholic pastor bends over backwards to make every accommodation possible for a Protestant and hints that it is okay for them to receive Catholic communion how ‘pastoral’ is that to the men and women and their families who have given so much because they really did believe there was a difference between Lutheran and Catholic and that it was worth giving up everything to be in full communion?”

Rocco Palmo, author of the well-known Church-watching blog Whispers in the Loggia, speculates that the pope must have been prepared for the question in advance. He writes: “Having employed Q&A as a favorite format with no shortage of groups over time, Papa Bergoglio is customarily appraised of the questions to be put to him in advance – and given the situation here, it'd be practically impossible to believe that Francis didn't anticipate the topic coming up.”