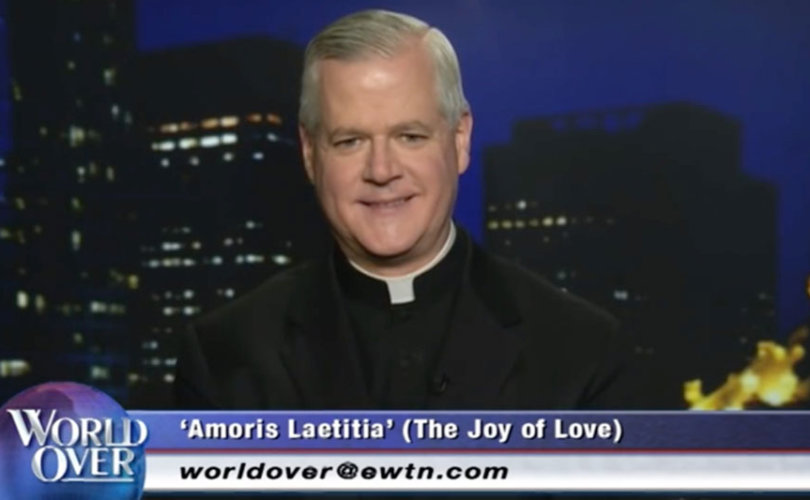 December 14, 2017 (LifeSiteNews) –  A canon lawyer and priest of the archdiocese of New York declared on a popular Catholic television show that Amoris Laetitia would not have been accepted as authentic magisterium when Francis was only a Cardinal.

“There can be no rupture about Catholic teaching,” he said. “Whether it’s properly affirmed or seemingly denied, it still remains what it is.”

“Let’s say Amoris Laetitia had been issued by Cardinal Bergoglio when he was archbishop of Buenos Aires. I’m certain that it would have been sent to Rome and that the Congregation for the Doctrine of the Faith would have looked at it and said, ‘This is not in harmony with the teachings authentically taught by … Canon Law, Pope John Paul II, [and] Pope Benedict.’”

“In other words,” Murray continued, “what we’re dealing with now is something that the Pope has said is his ‘authentic magisterium’ [but] would have not been recognizably in harmony with the Catholic teaching if he had issued it as the bishop in Buenos Aires.”

The teaching of the Church is designed to help people get into heaven, not to make them feel good about themselves, Murray said.

“You really want to feel good about yourself?  Be in a state of grace, and don’t publicly violate the Church’s teaching. That’s the message I think is getting lost here.”

Murray said the inclusion of the Argentine Bishop’s guidelines on Chapter 8 on Amoris Laetitia and Pope Francis’ private letter affirming them to the official register of the Church was the Pope’s attempt to gain acceptance for his personal point of view regarding communion for the divorced-and-remarried.

“I think it’s part of the papal attempt to gain acceptance for his point of view which is that the previous discipline was too harsh and we have to go to what is called a ‘case-by-case analysis.’”

This, however, flies in the face of the words of Christ, Murray said.

“For me, revelation, which is precisely what the words of Jesus are, if a man divorces his wife and married another, he commits adultery–that covers all cases. There is no case-by-case exception to that,” he asserted.

The canon lawyer said that the situation of the divorced-and-remarried is not the same as those who have received decrees of nullity from annulment tribunals, for the former group acknowledge they have valid marriages but persist in second relationships.

“Doctrine, discipline, everything goes together, which is why this is so troubling,” he told Arroyo. “I think the Dubia Cardinals are right. Either we get moral precision in the teaching of the Church, or we’re going to fall into chaos.”

“The permission by the pope in Amoris Laetitia in the famous footnote that the accompaniment [of the divorced-and-remarried] can include the sacraments is only a permission, not a command,” he said.  “Canon 915 remains. Those who are publicly engaged in grave moral offenses should be denied the sacraments because we want to preserve the Church from scandal.”

Murray indicated that the different reactions to Amoris Laetitia from bishops around the world has made the legal order in the Catholic Church unintelligible.

“The problem is that the legal order in the Church has to be a unified presentation in order to be intelligible,” he explained. “The Archbishop of Lisbon just came out with a statement saying that now divorced-and-remarried Catholics in his diocese are going to be given the sacraments. The bishops of Malta said the same thing, and they basically left it up to the people to decide for themselves.”

Nevertheless, Murray stated, Canon 915 still stands and it guides his own practice.

This episode of EWTN’s “World Over” show was first aired on December 7, 2017.