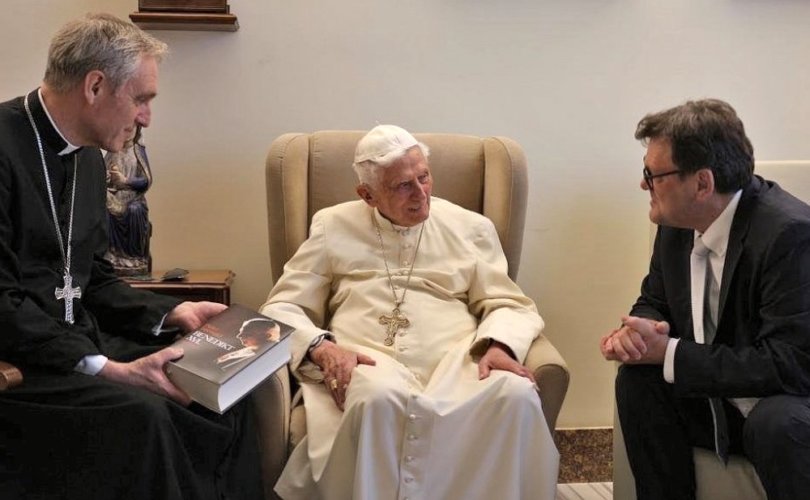 “The viral disease is accompanied by attacks of severe pain,” wrote Passauer Neue Presse. On Saturday, Seewald had met the 93-year-old former head of the Catholic Church in order to present his monumental biography of the German Pope.

“At the meeting, the Pope emeritus was optimistic despite the illness, and said that if his strength increased, he would possibly take up his pen again,” the newspaper pointed out.

Seewald also emphasized that Benedict’s thinking and memory are alert, but his voice is hardly audible. A documentary released by German television station BR in January had already featured some new footage where the Pope was barely understandable.

The newspaper explained that the former Pope’s spiritual testament will be published after his death. “As his final resting place he had disposed of the former grave of Saint John Paul II in the crypt of Saint Peter’s cathedral,” continued Passauer Neue Presse. “He felt particularly attached to this predecessor.”

Archbishop Georg Gänswein, Pope Benedict’s private secretary, announced through the Vatican press office that there was no reason “for particular concern,” reported the Catholic News Service.

“The health condition of Emeritus Pope does not give cause for particular concern, except that of a 93-year-old who's overcoming the most acute phase of a painful but not serious illness,” he said.

Pope Benedict developed shingles following his return to Rome in June. He had previously visited his brother Msgr. Georg Ratzinger one last time, before his death on July 1.

Benedict had surprised everybody by flying to Germany on June 18. Bishop Rudolf Voderholzer of Regensburg welcomed him at the airport. The Pope Emeritus stayed at the seminary in Regensburg, visiting with his dying brother several times a day. He was accompanied by his private secretary Gänswein, his doctor, his caregiver, and one religious sister.

During his stay in Germany, which was supposed to be private, Benedict XVI spent the bulk of his time with his brother, but also met with the Apostolic Nuncio to Germany, Archbishop Nikola Eterović, as well as the Minister President of Bavaria Markus Söder. He traveled to the cemetery where his parents and his sister are buried.

Catholics and other bystanders lined the streets whenever the Pope Emeritus moved from one place to another in Regensburg. Thus, in spite of the private nature of his visit, numerous photos and videos of the 93-year-old former Pope were taken. He traveled back to the Vatican on June 22.

Peter Seewald’s biography of Pope Benedict was released in May. While writing the book, Seewald talked to the Pope on several occasions, leading to Benedict’s remarks on homosexuality and abortion being picked up by the news media.

Benedict linked the dominance of “homosexual marriage” and “abortion” in the world to the “spiritual power of the Anti-Christ.”

“One hundred years ago,” Benedict said, “everybody would have considered it to be absurd to speak of a homosexual marriage. Today, one is being excommunicated by society if one opposes it.” The same applies to “abortion and to the creation of human beings in the laboratory,” Benedict added.

Asked about the claim that he as Pope encountered “many blockages” during his papacy on the part of the Roman Curia, Pope Benedict answered: “Blockages came more from the outside than from the Curia. I did not want merely to promote first and foremost the purification in the small world of the Curia, but in the Church as a whole.”

He added that “in the meantime, events have shown that the crisis of the Faith has led also especially to a crisis of Christian existence.” This, he continued, is what the “Pope has to have in front of his eyes.”

“Of course,” he pointed out, “events such as ‘VatiLeaks’ are a nuisance and not understandable for the people in the world at large and deeply disturbing. But the real threat to the Church and with it to the Petrine Office does not come from such things, but from the world-wide dictatorship of seemingly humanistic ideologies.” To contradict this dictatorship, Benedict explained, “means the exclusion from the basic consensus in society.”

Seewald had previously released four interview books with Pope Benedict: Two when he was still Cardinal Joseph Ratzinger, one as the reigning Pontiff, and one as Pope emeritus.