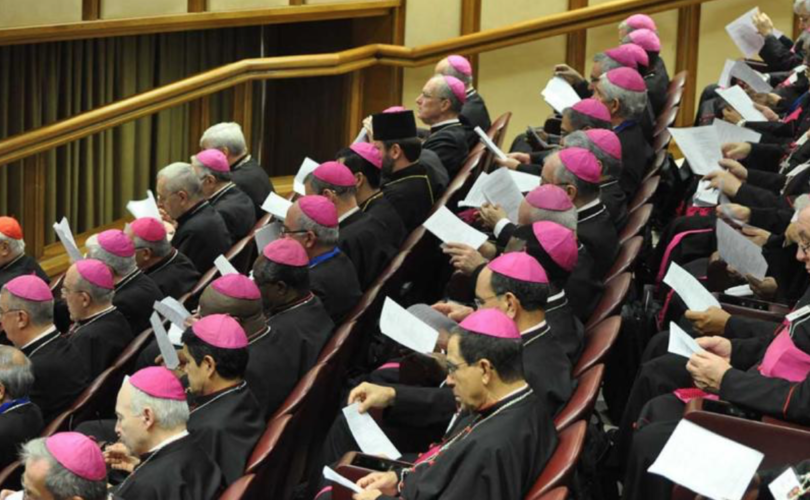 (LifeSiteNews) – The man who glowingly sketched Pope Francis as a “great reformer” only a year and a half into his papacy is now predicting the upcoming synod of bishops on synodality may bring a revolutionary transformation to the Catholic Church.

Austen Ivereigh wrote Thursday about the objectives of the synod “For a Synodal Church,” set to begin in October, calling it a “historic shake-up” and “potentially the most transformative moment in Catholicism since the Second Vatican Council, which it seeks to embed permanently into the life of the Church.”

“The two-year ‘synod on synodality,’” wrote Ivereigh in Commonweal, “is set to mark Christianity forever.” He went to note, “Yet so far the disengagement has been almost total. (Has your parish priest mentioned anything? I thought so.)”

Perhaps the most “transformative” aspect of the synod, wrote Ivereigh, is that the “People of God” will no longer be “passive spectators,” but seriously consulted to discern the voice of the Holy Spirit. The bishops remain the “ discerners-in-chief,” and the Pope the final decision-maker in this process.

Ivereigh wrote, “Thus, ‘the purpose of this synod’ — and indeed, the point of a synodal Church — ‘is to listen, as the entire People of God, to what the Holy Spirit is saying to the Church.’” He further noted that the Preparatory Document for the synod claimed it was the role of the devil (“the diabolos”) “to try and separate” the People of God, the Holy Spirit, and the bishops in a synod.

The vademecum, or synod handbook, expressly states that the synod’s discernment process of “listening” must include “Catholics who rarely or never practice their faith, etc.,” and goes so far as to demand listening to “people who have left the practice of the faith, people of other faith traditions, people of no religious belief, etc.”

“No one — no matter their religious affiliation — should be excluded from sharing their perspective and experiences, insofar as they want to help the Church on her synodal journey of seeking what is good and true,” reads the text.

According to Ivereigh, this consultation process will not be in service of a particular ideological “program”: “A synod is not called to defend or to change anything; it is called to enable an assembly that discerns what the Holy Spirit asks of the Church at this time in relation to the mission for which it exists: to evangelize.”

Indeed, the preparatory document’s “thematic nuclei” to be explored during the synod are somewhat vague and more process-oriented than “issue”-oriented. These topics include variations of the theme of “synodality,” which Cardinal Mario Grech explained “is the form of communion of the Church — People of God.” Accordingly, the “thematic nuclei” include “the journeying companions,” “listening,” “speaking out,” and “dialogue in Church and society,” among other topics.

But Ivereigh also believes that synodality results in a kind of synthesis, or what he calls “alchemy,” of different views: “To enter into synodality is to embrace an alchemy in which the Spirit acts as a complexio oppositorum, in which what is good and valid on all sides is preserved in a new vision,” he wrote.

Ivereigh’s expectations of the upcoming synod as published in Commonweal echo themes of his 2014 biography of Pope Francis, “The Great Reformer: Francis and the Making of a Radical Pope.”

As one reviewer of this biography explained, Ivereigh said there are three “keys to the papacy of Francis.” One of these keys is Francis’ determination to “learn and hear the infallibility of God’s holy faithful people.” Ivereigh reiterated this in an interview with Raymond Arroyo, saying that Pope Francis has “always rooted himself in what he calls God’s holy faithful people.”

Part of another “key” is the need of the Pope to “assemble real synods of governance and dismantle structures” in order to bring about “institutional reform” of the Church. At the heart of this is what Ivereigh argued has been a determined goal of Bergoglio’s backers from the beginning: Church implementation of collegiality.

Ivereigh’s biography does not limit itself to describing Pope Francis’ past and ideology, but makes a point of predicting how Pope Francis’ “ambitious program” will “likely end,” because Ivereigh has come to an intimate knowledge of the long-held and determined agenda of the group of cardinals who backed Bergoglio: the “St. Gallen mafia.”

While Ivereigh does not refer to them as a “mafia,” Cardinal Godfried Daneels, one of the group’s inner circle, revealed in 2015 that this is what the group called itself.

Karim Schelkens, one of the biographers of Daneels, said in a 2015 interview, “The election of Bergoglio was prepared in Sankt-Gallen, without doubt. And the main lines of the program the Pope is carrying out are those that Danneels and Co were starting to discuss more than ten years ago.”

Ivereigh wrote in Pope Francis’ biography that the St. Gallen group was formed in the late 1990s due to “growing concern” about a “position” that “looked to some critics as if it were harking back to the days before the Second Vatican Council”: the position that there is “only one ‘Magisterium,’ or teaching authority, in the Church, and that the universal church is ‘ontologically prior’ to the local church.”

“The St. Gallen group believed that what was needed was a thorough reform of governance, a restoration of the balance between the local and universal Churches, toward an authentic collegiality,” wrote Ivereigh.

The self-described “mafia” lamented the lack of Church collegiality as an obstacle to evangelization, as well as to “Christian unity.” Something as fundamental as the “assertion of papal power” after the Reformation, Ivereigh wrote, was “cited as a major stumbling block” by leaders of the “reformed or orthodox traditions.”

This radical and heterodox take on collegiality was articulated by one of the members of the St. Gallen group, now-Cardinal Walter Kasper, in opposition to a 1992 document by Cardinal Ratzinger.

Ivereigh explained that Kasper argued “in a widely published article in December 2000” that Cardinal Ratzinger’s position “became ‘really problematic when the one universal Church is identified with the Roman Church, and de facto with the Pope and the Roman Curia,’ describing it as ‘an attempt to restore Roman centralism.’”

Ivereigh said Kasper “went on to argue that collegiality was vital to resolve pastoral questions such as the admission of divorced and remarried persons to Communion, as well as making credible the Catholic invitation to unity with other Christians. Progress on unity depended, he argued, on this recognition of the value of the local Church. ‘The ultimate aim is not a uniform united Church, but one Church in reconciled diversity.’ The phrase ‘reconciled diversity’ was one Bergoglio adopted in Buenos Aires when discussing relations with other Christians and other faiths.”

Ivereigh explained that these early concerns of the St. Gallen group carried into discussions during the conclave following Pope Benedict XVI’s resignation. “There was much talk of reform of governance … and for fluid contact between Rome and the local Church,” wrote Ivereigh. He quoted Vatican spokesman Fr. Federico Lombardi as telling journalists on March 9, a few days prior to the papal conclave, that “collegiality had been ‘a constant theme in these discussions.”

Ivereigh also quoted Cardinal Seán O’Malley of Boston as recalling, “‘We were all pretty certain that there would be dramatic changes and a new way of looking at the Curia, with more collegiality.’”

“The diagnosis of the St. Gallen group in the early 2000s was now the plat du jour,” wrote Ivereigh.

Ivereigh himself is the former assistant of Cardinal Murphy-O’Connor, whom Ivereigh described in “The Great Reformer” as part of the “core” of the St. Gallen group from its beginning.

In a September 2017 article for The Tablet, Ivereigh described Murphy-O’Connor as a “kingmaker” in the conclave that elected Pope Francis. Ivereigh said the cardinal was “proud to have opened that channel for the Holy Spirit to get to work.”