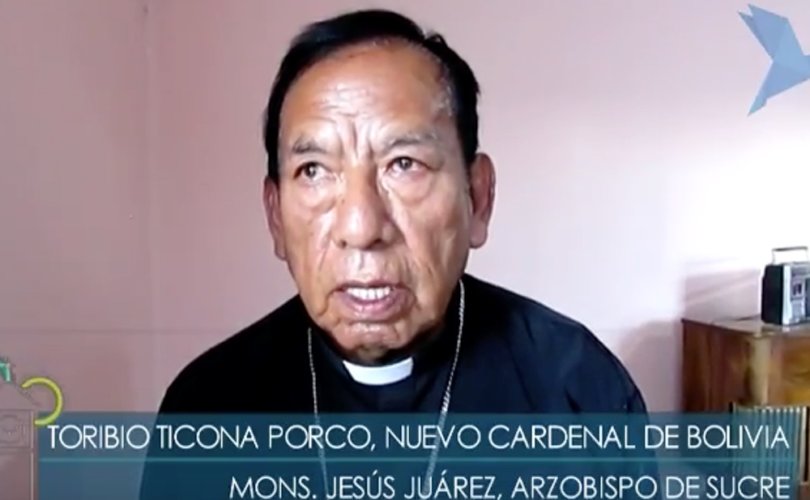 May 30, 2018 (LifeSiteNews.com) – A retired Bolivian bishop recently chosen by Pope Francis to be made a cardinal is vigorously denying accusations that he fathered two children with a concubine while serving the Church as a bishop.

According to accusations published yesterday in the traditionalist Catholic publication Adelante la Fe, Bishop Toribio Ticona, the emeritus prelate of the Prelature of Corocoro, has for years maintained three different residences in the Bolivian city of Oruro, where he has housed his female companion and their two children.

LifeSite has obtained a copy of a statement detailing the accusation submitted to the Bolivian apostolic nuncio, upon which the Adelante la Fe story was based. The statement contains sworn testimony from an eminent Bolivian Catholic activist who is a critic of Pope Francis’ penchant for selecting cardinals he regards as underqualified and ideologically slanted.

The bishop responded yesterday with a statement made to the Catholic news service ACI Prensa, declaring that he has “nothing to do with the aforementioned acts,” adding , “I am willing to defend my honor in every necessary venue.”

“If these accusations continue, I won’t have any problem with initiating a lawsuit for calumny against those who are promoting or propagating them,” said Ticona.

Ticona said that the same rumors “already came out in 2011 . . .and ended up as simple calumnies. Personally I’m glad that these accusations are coming out at this time, so that the case can be definitively closed.”

The bishop said that he considers the accusation to be an “attack not so much on my person, but on the person of Pope Francis.” In an apparent reference to Adelante la Fe, he added, “These are attacks that come from sources known for their hostility to the Holy Father.” He encouraged the faithful to pray for Francis.

Adelante la Fe has responded to Ticona’s denials with another article giving details of the accusations, including an address where the bishop’s concubine and children allegedly lived, and a high school attended by the children. The publication noted that a two-page letter that names accusers and gives further detail has been submitted to the apostolic nuncio.

Pope Francis announced his plan to make Ticona a cardinal on May 20th, along with 14 other nominees, at the upcoming consistory on June 29. Ticona is 81 years old, and therefore would not be eligible to vote for Pope Francis’ successor in the next papal conclave.

LifeSite has obtained a copy of the letter, which names five individuals as having knowledge about the bishops’ alleged affair. It also claims that two different bishops have been given information about Ticona’s behavior in recent years.  It ends with a solemn oath before God that the facts alleged in the letter are true.

LifeSite has sent an electronic message to the Bishop of Oruro, Cristóbal Bialasik, asking him if he is aware of the contents of the letter and if he can confirm or deny their veracity. He has not yet responded. The Holy See Press Office has also not yet responded to LifeSite’s inquiries.

The nomination of Ticona has been interpreted as a symbolic act on the part of the pope, elevating a cleric from humble, working class origins to the ranks of the Vatican aristocracy. Ticona is of indigenous descent and is the son of uneducated parents who worked in menial jobs before entering the seminary, after which he was ordained to the priesthood and ultimately made a bishop. The bishop never received jurisdiction over a diocese, however. His last position was the oversight of the Prelature of Corocoro.

The selection of Ticona for the cardinalate by Pope Francis has been warmly received by Evo Morales, President of Bolivia, who is also an indigenous from a working class background, and who has had a strong friendship with Ticona. Although Morales loosely identifies as a Catholic, he has also expressed belief in various forms of indigenous paganism, and has butted heads with the Church on a number of occasions, removing Bolivia’s official support of the Catholic faith from the constitution, and attempting unsuccessfully to impose a new legal code that would prohibit the Church’s evangelizing activities and loosen restrictions on abortion. Ticona’s selection by Francis would appear to be an olive branch extended to Morales by the Pope, and is in line with many other appointments the pontiff has made to the cardinalate of bishops from more humble, poorer dioceses.