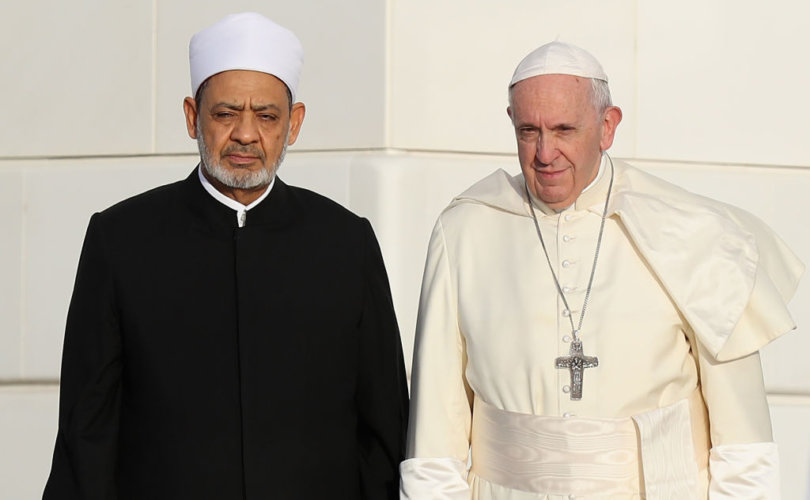 ROME, February 6, 2019 (LifeSiteNews) — Pope Francis’s statement in Abu Dhabi on religious pluralism being “willed by God” — and his call to Christians and Muslims to enter the “ark of fraternity” — seem not only to “overturn the doctrine of the Gospel” but also to align with the ideas of Freemasonry, a respected Italian historian has said.

In comments to LifeSite (see full text below), Professor Roberto de Mattei, Founder and President of the Rome-based Lepanto Foundation, also said the Pope’s recent statements appear to be in discontinuity with the Fourth Lateran Council and with magisterial teaching from Pope Gregory XVI to Pope Pius XI.

The Pope came under fire on Monday for signing the “Document on Human Fraternity for World Peace and Living Together,” with Ahmad el-Tayeb, Grand Imam of Egypt’s al-Azhar Mosque, during an interreligious meeting in Abu Dhabi.

The Feb. 4 joint statement incited controversy among Christians for asserting that “the pluralism and the diversity of religions” are “willed by God in His wisdom, through which He created human beings” — a claim many believe to be contrary to the Catholic faith.

Earlier the same day, the Pope also made what some regard as equally problematic remarks to the Muslim Council of Elders, but the statements garnered less attention.

“According to the biblical account, in order to preserve humanity from destruction, God asked Noah to enter the ark along with his family. We too in the name of God, in order to safeguard peace, need to enter together as one family into an ark which can sail the stormy seas of the world: the ark of fraternity.”

“Fraternity” has in fact become the new buzzword for the current pontificate.

In his Urbi et Orbi address on Christmas Day, Pope Francis said his wish for a happy Christmas was a “wish for fraternity.” Freemasons in Europe praised the Pope’s message, saying it demonstrates “the Church’s current departure” from its condemnation of Freemasonry.

The new year then opened with the editor-in-chief of the Osservatore Romano, Andrea Monda, announcing that “fraternity” is the “word of hope” for 2019.

“Fraternity” and “humanism” has also featured prominently in recent Vatican statements, most notably in the Pope’s letter to the Pontifical Academy for Life.

In light of recent events, LifeSite asked Prof. de Mattei for his thoughts on the Pope’s statements in Abu Dhabi, the current pontificate’s emphasis on “fraternity,” and this term’s meaning within Freemasonry.

According to de Mattei, when “fraternity” is divorced from Christian charity, “far from constituting an element of cohesion in society,” it “becomes the source of its disintegration.” He argues that “if men, in the name of fraternity, are forced to live together without an end that gives meaning to their sense of belonging, the ‘ark’ becomes a prison.”

The Catholic historian also reminds readers that “Freemasonry continues to be condemned by the Church, even if the men of the Church, at the highest levels, seem to embrace its ideas.”

Here below is the full text of Professor Roberto de Mattei’s comments to LifeSite.

The “Ark of Fraternity” and Christian Charity

The logo for Pope Francis’s journey to the United Arab Emirates depicts a dove with an olive branch. During an interreligious meeting in Abu Dhabi, the Pope explained that the image “recalls the story – present in different religious traditions – of the primordial flood. The Pope told Muslim leaders: “According to the biblical account, in order to preserve humanity from destruction, God asked Noah to enter the ark along with his family. Today, we too in the name of God, in order to safeguard peace, need to enter together as one family into an ark which can sail the stormy seas of the world: the ark of fraternity.”

According to this reading, Noah’s Ark is an ark of fraternity in which men of different religions live together, because God himself has willed religious pluralism. In fact, in the Document on Human Fraternity which the Pope signed with Ahmad el-Tayeb, Grand Imam of Egypt’s al-Azhar Mosque, he said: “The pluralism and the diversity of religions, color, sex, race and language are willed by God in His wisdom, through which He created human beings.”

This reading seems to overturn the doctrine of the Gospel. In fact, the Ark which Noah by divine command built before the Flood, as a refuge for himself, his family and all animal species (Gen. 6:13-22), is presented by St. Paul as a refuge of salvation for believers and a sign of perdition for the world (Heb. 11:7). Catholic Tradition has therefore always seen in Noah’s Ark the symbol of the Church, outside of which there is no salvation (cf. S. Ambrose, De Noe et Arca, 6. 9, in Migne, Patrologia Latina, vol. 14, coll. 368-374, and Hugo von Hurter, De arca Noe Ecclesiae typo Patrum sententiae, dans Sanctorum Patrum opuscula selecta, III, Innsbruck 1868, pp. 217-233).

This is why the Church has the mission of preserving and spreading the Catholic Faith. Our Lord said to the Apostles: “Go into all the world and preach the Gospel to the whole creation. He who believes and is baptized will be saved; but he who does not believe will be condemned” (Mk 16:16). And the Apostle to the Gentiles stresses: “There is one Lord, one faith, one Baptism” (Eph. 4:5).

It is a dogma of faith proclaimed by the Fourth Lateran Council, under Innocent III, that “there is indeed one universal Church of the faithful, outside of which absolutely no one can be saved.”The principle “nulla salus extra Ecclesiam” does not exclude from salvation those who are outside the Church as a result of invincible error, but they are ordered to her at least through an implicit desire. However, they lack the assurance of salvation and the ordinary means to attain it. This truth of faith was confirmed by Gregory XVI (Mirari Vos of August 15, 1832); Pius IX (Singulari quidem, of March 17, 1856 to the bishops of Austria); and Leo XIII (Satis cognitum of June 29, 1896), among others. Pius XI, in his encyclical Mortalium animos of  January 6, 1928, explains, in turn that, in the field of faith, fraternal unity cannot be achieved in the same way as in the political sphere. To subordinate the truth of faith to fraternity means to profess religious indifferentism, which has constantly been condemned by the universal Magisterium of the Church.

“Fraternity,” together with Liberty and Equality, is instead one of the founding principles of the French Revolution. The revolutionary trinomial boils down to a system of relations in which there is no transcendent principle to refer to, and the three supreme values, each considered as an absolute, necessarily come into conflict with the other. In the absence of a higher end, fraternity — far from constituting an element of cohesion in society — becomes the source of its disintegration. If men in fact, in the name of fraternity, are forced to live together without an end that gives meaning to their sense of belonging, the “Ark” becomes a prison, and fraternity — imposed in words — is destined to capsize in a centrifugal thrust towards fragmentation and chaos.

The simple affirmation of fraternal coexistence is not able to justify sacrifice, which is the highest expression of love for one’s neighbor; and this is because sacrifice implies renunciation of a real good for the sake of higher goods; but fraternity does not propose any higher good that is worthy of sacrifice, beyond coexistence, which is not a value but is only a meaningless fact. The myth of fraternity actually conceals the deepest social egoism and represents the antithesis of Christian charity, which is the only true foundation of social relations between men.

Fraternity is also a dogma of Freemasonry, which in its ideology and rituals offers a parody of Christian doctrine and liturgy. It is no coincidence that the Grand Lodge of Spain, with this tweet, thanked Pope Francis for his Message of December 25, 2018, “Todos los masones del mundo se unen a la petición del Papa por ‘la fraternidad entre personas de diversas religions’ [“All the Freemasons of the world join the Pope’s request for ‘fraternity between people of different religions.’”]

“In his Christmas message from the central loggia of the Vatican,” the Spanish Freemasons continued:

“Pope Francis asked for the triumph of universal fraternity among all human beings. Fraternity among individuals of every nation and culture. Fraternity among people with different ideas, yet capable of respecting each other and listening to one another. Fraternity among persons of different religions. (…) The words of the Pope demonstrate the Church’s current departure from the content of Humanum genus (1884), the last great Catholic condemnation of Freemasonry.”

In reality Freemasonry continues to be condemned by the Church, even if the men of the Church, at the highest levels, seem to embrace its ideas. But the teaching of the divine Master continues to resound in faithful hearts: there love for one’s neighbor can only be based on love for God. And without reference to the true God, who can only be loved within the Church’s Ark of Salvation, fraternity is only an empty word that conceals hatred of God and neighbor.