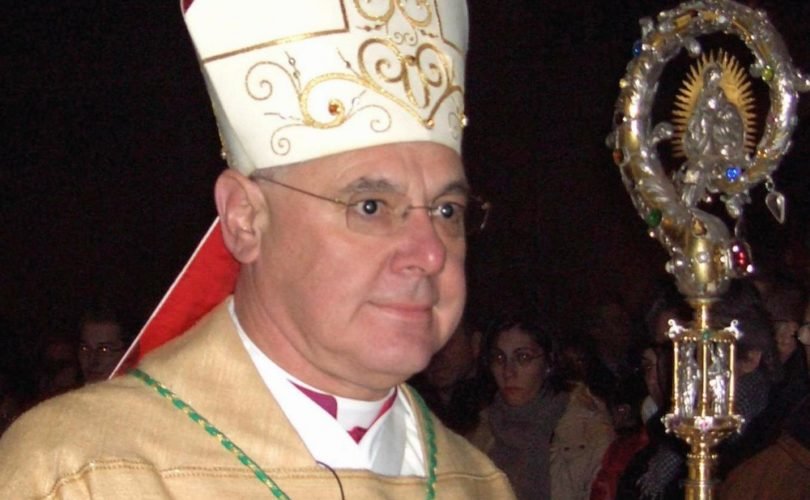 ROME, February 1, 2017 (LifeSiteNews) – The head of the Vatican’s doctrinal office has issued a strong rebuke of bishops who use the pope’s exhortation Amoris Laetitia to “justify situations against the will of God.”

“Adultery is always a mortal sin and the bishops who create confusion about this must study the doctrine of the Church,” Cardinal Gerhard Ludwig Müller, Prefect for the Congregation for the Doctrine of Faith, says in a new interview with the print journal Il Timone. “We have to help the sinner overcome sin and convert.”

Cardinal Müller's strong remarks are somewhat surprising given his strong criticism last month of the four Cardinals asking the pope for clarity on Amoris Laetitia. The doctrinal prefect has strongly emphasized that the document can be interpreted in light of Church teaching, largely dismissing concerns about the actual document's role in fomenting confusion.

Cardinal Müller told Italian TV-channel TGCOM24 January 8 that the pope has not put the faith and Catholic teaching in danger and a formal correction of Amoris Laetitia, as contemplated by the dubia Cardinals, is “impossible.”

“The Pope is basically forced to answer with ‘yes or no’. I don’t like that,” he said.

In his latest interview with Il Timone, the cardinal says Amoris Laetitia must “clearly be interpreted in the light of the whole doctrine of the Church. […] It is not right that so many bishops are interpreting ‘Amoris Laetitia’ according to their way of understanding the Pope’s teaching. This does not keep to the line of Catholic doctrine.”

Here Müller references the contradictory readings and guidelines given by bishops – like those in Malta, Buenos Aires, and San Diego – to allow Communion for adulterers.

With regards to allowing each individual’s own conscience to assess whether he is in mortal sin – as the recent document of the Maltese bishops suggested – Cardinal Müller answered: “All must follow their conscience but conscience is a term that expresses a rapport, a relation. Not with myself but with the other.” This “other” Müller identifies as God “who has gave us the Commandments not to upset us, or to control us, but to illuminate our path.”

“Adultery is always a mortal sin and the bishops who create confusion about this must study the doctrine of the Church.”

“It is impossible for there to be a contradiction of doctrine and personal conscience. For example, it cannot be said that there are circumstances according to which an act of adultery does not constitute a mortal sin. For Catholic doctrine, it is impossible for mortal sin to coexist with sanctifying grace. In order to overcome this absurd contradiction, Christ has instituted for the faithful the Sacrament of penance and reconciliation with God and with the Church.”

Pope Francis is still silent on the four Cardinals’ dubia seeking clarity on Amoris Laetitia, yet Müller clearly states that any interpretation that goes contrary to Church tradition would be in opposition with the faith. Commenting on the importance of his own Congregation, he said: “The magisterium of the Pope is interpreted only by him or through the Congregation for the Doctrine of Faith. The Pope interprets the bishops, it is not the bishops who interpret the Pope, this would constitute an inversion of the structure of the Catholic Church.”

“To all those who are talking too much, I urge them to study first the doctrine on the papacy and the episcopate of the two Vatican Councils. … The bishop, as teacher of the Word, must himself be the first to be well-formed so as not to fall into the risk of the blind leading the blind,” and he added: “The Church can never justify a situation which is not in accordance with the will of God.”

Müller answered clearly that Communion for civilly remarried divorced Catholics is not possible, as St. John Paul II’s exhortation Familiaris Consortio presented it: “Of course, this cannot be overcome because it is not only a positive law of John Paul II, but he expressed an essential element of Christian moral theology and the theology of the sacraments.”

Müller identified the confusion elsewhere: “The confusion on this point also concerns failure to accept the encyclical Veritatis Splendor, with the clear doctrine of the intrinsece malum [intrinsic evil].”

The indissoluble bond of marriage is constituted by God and cannot be changed, not even by the Pope or a majority decision of bishops. Upon being asked about it, Müller replied: “No! This is the substance of the sacrament, and no power in heaven or on earth, neither an angel, nor the Pope, nor a council, nor a law of the bishops, has the faculty to change it.”

At the same time Cardinal Müller insisted: “Men are called to choose between good and evil. Animals also kill other animals, but we are confronted with the question of if this is good or evil.” At the same time he appealed to the individual conscience that is based on the law that is “naturally inserted in being and for us Christians, this is expressly declared in the ten Commandments and the evangelical beatitudes.”

Müller strongly urged clarity to defeat the confusion of Amoris Laetitia: “I urge everyone to reflect, studying the doctrine of the Church first, starting from the Word of God in Sacred Scripture, which is very clear on marriage. […] The Word of God is very clear and the Church does not accept the secularization of marriage. The task of priests and bishops is not that of creating confusion, but of bringing clarity. One cannot refer only to little passages present in Amoris Laetitia, but it has to be read as a whole, with the purpose of making the Gospel of marriage and the family more attractive for persons. It is not Amoris Laetitia that has provoked a confused interpretation, but some confused interpretations of it. All of us must understand and accept the doctrine of Christ and of his Church, and at the same time be ready to help others to understand it and put it into practice even in difficult situations.”

The Cardinal also answered questions in regards to the Protestant Reformation, which will celebrate its 500 year anniversary this year.

He denounced the reduction of Tradition’s importance. “Revelation is certainly present also in the Bible in a unique and fundamental way, but also in the life of the Church, in the writings of the Fathers, in the great Councils, and in the sacramental life. The Sacraments are not simply a commemoration; in them Christ is present, really and concretely.”

The Protestant revolution for Müller presents more than a simple difference in denomination: “The Protestant Reform cannot just be understood as a reform of some moral abuses but must be acknowledged as something that affected the very core of the catholic concept of Revelation.”

“Ecumenism cannot be advanced by relativism or indifference in regards to doctrinal topics: to accept unity we cannot accept ‘gifting’ two or three sacraments or accepting that the Pope is a type of president of the different Christian denominations.”