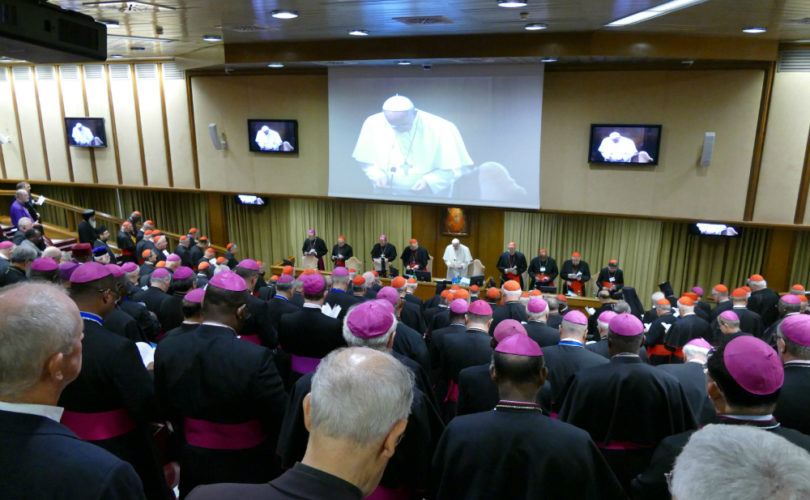 ROME, October 23, 2015 (LifeSiteNews) — I’m writing this while flying home from Rome currently after an exhausting nine days of covering the Synod on the Family for LifeSiteNews and working with Voice of the Family to assist Synod Fathers in their task to defend the teaching of the Church.  The work is grueling — sometimes twenty-hour days with very little time for anything but prayer and work. And prayer is a definite part of the work. A regular regimen of Mass and rosaries to implore the help of the Almighty and the assistance of the saints are not an option in this battle, which is more spiritual than anything else.

The stakes are incredibly high; they literally portend a major schism in the Catholic Church.  The reality is, despite the presentation of non-negativity and fraternity inside the Synod hall, or aula as it is called, those upholding orthodoxy have been fighting a pitched battle with powerful foes openly proposing heresy with not a word of correction from Pope Francis.

The heart of the hero-faction of this year’s Synod has shifted from the Africans last year to the Eastern Europeans.  They have spoken out, naming bluntly the evils being proposed by cardinals and bishops as having been inspired by the devil. But a powerful cardinal shot back by accusing faithful bishops of bringing “division,” the hallmark of Satan, he said.  Interestingly, when Archbishop Tomash Peta referred to the “smoke of Satan” entering the Church through the Synod’s heretical proposals he was being deadly serious. When Vienna Cardinal Christoph Schonborn retorted with his “smoke of Satan” rejoinder he paused for laughter at his Kazakhstan counterpart’s expense.

The most vociferous of the heretics at the Synod and those wielding the most power and meting out punishment are the Western Europeans with assistance from liberal Americans.  German Cardinal Walter Kasper it seems has taken a back seat to Cardinal Reinhard Marx, president of the German Bishops’ Conference, who with his intervention, published on the conference website, spells out his anti-Catholic proposal to allow Holy Communion to couples remarried after having left “canonically valid” marriages while their former spouses are still living. Even the escape hatch of the new couple living in continence as “brother and sister” was ruled out: Cardinal Marx said, “The advice to refrain from sexual acts in the new relationship not only appears unrealistic to many. It is also questionable whether sexual actions can be judged independent of the lived context.”

The Americans are split down the middle at the Synod with the appointees by Pope Francis touting heresy and shutting down those who were elected by their brother bishops in America to attend. Chicago Archbishop Blase Cupich suggested openly to the media that even active homosexual couples could be given Holy Communion. Washington Cardinal Donald Wuerl just completed a media tour using harsh language to put Philadelphia Archbishop Charles Chaput in his place.

As for the Canadians, there are three who have garnered much attention.  The heroic act of Toronto Cardinal Thomas Collins as one of the thirteen Cardinals to sign on to the letter to the Pope expressing grave concern about manipulation at the Synod caused him much suffering. I met him at a restaurant and he looked very tired. I expressed a simple thanks and offered him prayers on behalf of life and family activists.  Archbishop Paul-Andre Durocher planted himself firmly in the progressive camp along with Fr. Thomas Rosica early on in the proceedings.

All the while Pope Francis has presided in silence, never correcting the heresies but in his private homilies in Casa Santa Marta denouncing again and again those “doctors of the law” who lack mercy and whose “self-righteous attitude” betrays them as Pharisees.

The bombshell of the Synod came Saturday when, apart from the Synod itself, the pope presided at a celebration commemorating the 50th anniversary of Pope Paul VI establishing the modern Synod of Bishops.  He used the opportunity to speak of a “decentralization” of the Catholic Church.  Ironically he used and cited the Church’s strictest teaching on papal authority to enforce a change which is being interpreted as divesting the papacy of that very authority.  The Christ-appointed authority of the Rock of Peter is unique to the Catholic Church and was given only to Peter (the Pope) to guarantee its unity and fidelity.

There’s hardly any other way to interpret what’s happening now in Rome. Prior to the Synod we had Cardinal Marx, one of the pope’s nine top advising cardinals, openly say that the German Church was “not a subsidiary of Rome” and that it would go ahead with its proposal to give Holy Communion to remarried divorcees.  He’s spelled it out as direct heresy at the Synod with no objection from the pope. And Pope Francis has ordered decentralization.

What is it exactly that bishops conferences are unable to do now other than alter Church teaching?  As Cardinal Arinze told me in my interview with him in Rome, they can do just about anything except change faith and morals, and if we’re changing that we’re no longer Catholic.

All the old errors of the 60s seem to have come back to haunt us. By gently chiding them rather than stamping them out and disciplining or ousting their proponents, we now have seven new evil spirits along with the first infesting the Church.  There are surely harder times coming with even greater confusion in the Church.

While the picture may seem bleak, we have no cause for worry.  We believe Christ’s promise that the gates of hell will not prevail against His Church. Moreover, a great hope was instilled in me during my brief journey to the heart of the battle.  It was a hope which came from witnessing and working with God’s littlest ones; with those clergy and laity, young and old, ready and willing to lay down their lives for the faith.  These are regular heroes ready to forgo fame and fortune, prestige and honor, to be faithful to the teachings of Christ in good times and in bad.  These are the little ones who form the “calcaneum Mariae” or the heel of Mary which is predicted in Genesis 3:15 to crush the head of the serpent.