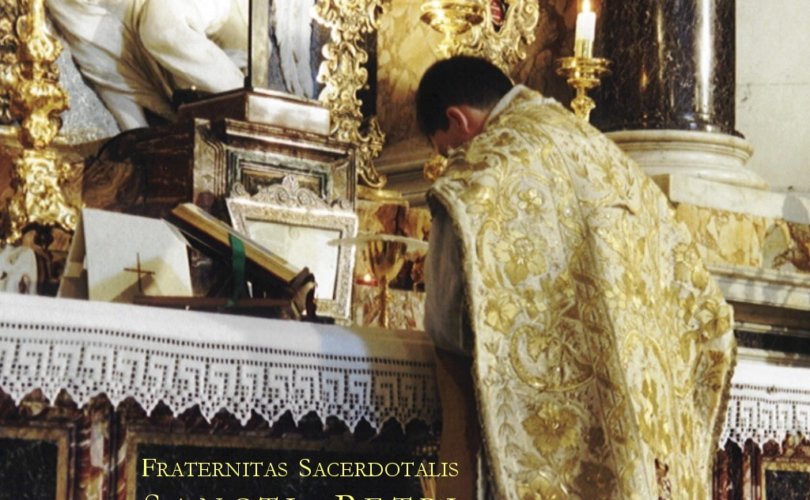 July 13, 2016 (LifeSiteNews) – Pope Francis’s exhortation Amoris Laetitia has the potential to take Church teaching “off the hinges” if liberal interpretations of it are implemented, the head of the German district of the Priestly Fraternity of St. Peter (FSSP) warns in an article on his district’s website.

Pope St. John Paul II established the FSSP in 1988 to offer the traditional, pre-Vatican II liturgy of the Church. From its founding, the FSSP has placed great emphasis on loyalty to the pope.

In his article, first published on May 19, Father Bernhard Gerstle writes that Amoris Laetitia contains “many beautiful and precious thoughts about human love, marriage and the family,” yet at the same time the document gives a “retroactive blessing” to the widespread yet disobedient practice of giving Communion to remarried divorcees by allowing it on a case-by-case basis.

Dr. Maike Hickson translated Fr. Gerstle’s comments in an article at The Wanderer.

Pope Francis has ceased to “in a general way, exclude those couples who live in an irregular situation (to include cohabiting couples) from the reception of the Sacraments,” Gerstle wrote.

“This is indeed a novelty and is thus being celebrated by the representatives of the liberal direction as being revolutionary and as constituting a landmark decision,” continued Gerstle. Those who “feel bound to the valid teaching of the Church, and who fear the watering down of the indissolubility of marriage,” see a “justified reason for the great concern that now there will follow a complete breach of the levée.”

“The Church’s teaching – according to which the validity of the Sacrament of Confession is dependent upon a penitent’s true contrition and his firm purpose to avoid the near occasion of sin if possible – would be taken off the hinges,” by such a sacramental approach contrary to the teachings of the Church, Gerstle wrote. Such an approach would be “a serious breach with the elementary principles of the Church’s moral teaching, as it had last been confirmed to be the irreformable teaching of the Church by St. John Paul II himself in his encyclical Veritatis Splendor, as well as in his apostolic exhortation Familiaris Consortio.”

Gerstle pointed out that such an approach may also have the effect of marginalizing divorced Catholics who follow the Church’s traditional teaching by remaining faithful to their marriage vows.

Amoris Laetitia “provokes splits within the Church” and thus threatens its visible unity, Gerstle warned. “The dilemma becomes even more clear – and in a sharp way – when we consider the words of Cardinal Gerhard Müller – the Prefect of the Congregation for the Doctrine of the Faith – who now tries to limit the damage by saying that, if Pope Francis had had the intention to change the teaching of the Church, he would have had to say so in a clearer manner.”

“We can only hope and pray that Pope Francis will respond with some subsequent clarifications, given the currently created confusion,” concluded Gerstle.

Gerstle is not the only German Catholic leader to express grave concern over the ambiguities of Amoris Laetitia.

Professor Robert Spaemann, a close friend of Pope Emeritus Benedict XVI and a well-known Catholic philosopher, said the exhortation is a “breach” with Catholic Tradition.

However, German prelates Cardinal Reinhard Marx, Archbishop Dr. Heiner Koch, and Bishop Franz-Josef Bode have all cited controversial footnote 351, which seems to open the door for Communion for remarried divorcees, in their praises of the exhortation arguing it changes sacramental practice. German Cardinal Walter Kasper is perhaps the most well-known promoter of a change in the Church’s approach. He championed the cause at the 2014 and 2015 Synods on the Family. It seems “clear” that the exhortation allows for Holy Communion for remarried divorcees in some cases, he has said.