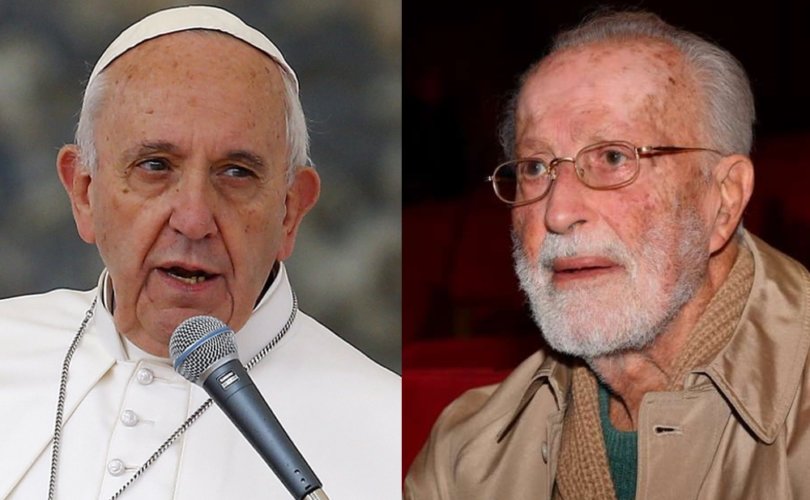 The Pope has granted Scalfari numerous interviews throughout his pontificate, despite repeated claims from the Vatican press office that his reports are unreliable.

In La Repubblica newspaper on Wednesday, Scalfari wrote: “Those who have had the chance, as I have had different times, to meet him [Pope Francis] and speak to him with the greatest cultural confidence, know that Pope Francis conceives Christ as Jesus of Nazareth, a man, not God incarnate. Once incarnated, Jesus ceases to be a God and becomes a man until his death on the cross.” According to Scalfari, “When I happened to discuss these phrases, Pope Francis told me: ‘They are the definite proof that Jesus of Nazareth, once he became a man, even if he was a man of exceptional virtue, was not God at all.’”

EWTN news anchor Raymond Arroyo reacted on Twitter, writing that he finds the report “hard to believe.” However, he added, “Why does the Pope continue to grant interviews to an atheist who does not take notes and relies on his aged memory to reconstruct conversations?”

I find this hard to believe. But why does the Pope continue to grant interviews to an atheist who does not take notes and relies on his aged memory to reconstruct conversations? The Vatican must correct this. https://t.co/Iz0cPxpGCU

The Holy See Press Office’s director, Matteo Bruni, issued the following official response to Scalfari’s report: “As already stated on other occasions, the words that Dr. Eugenio Scalfari attributes in quotation marks to the Holy Father during conversations with him cannot be considered as a faithful account of what has actually been said, but rather represent a personal and free interpretation of what he has heard, as is quite evident from what has been written today about the divinity of Jesus Christ.”

The Catholic Church teaches “that Jesus is inseparably true God and true man. He is truly the Son of God who, without ceasing to be God and Lord, became a man and our brother: ‘What he was, he remained and what he was not, he assumed’, sings the Roman Liturgy. And the liturgy of St. John Chrysostom proclaims and sings: ‘O only-begotten Son and Word of God, immortal being, you who deigned for our salvation to become incarnate of the holy Mother of God and ever-virgin Mary, you who without change became man and were crucified, O Christ our God, you who by your death have crushed death, you who are one of the Holy Trinity, glorified with the Father and the Holy Spirit, save us!’” (CCC 469)

A self-declared atheist, the 95-year-old Scalfari is a founder of La Repubblica and a one-time fascist who later became a libertarian and member of Italy’s national legislature. Scalfari has conducted several interviews with the pontiff. In March 2018, Scalfari claimed that the Pope told him that hell does not exist. La Repubblica claimed that Pope Francis had told him that the souls of those who do not go to heaven are annihilated. Francis allegedly said, “Souls are not punished,” and “Those who repent obtain God's forgiveness and go among the ranks of those who contemplate him, but those who do not repent and cannot be forgiven disappear. There is no hell — there is the disappearance of sinful souls.” Annihilationism is considered a heresy by the Catholic Church.

At the time, the Vatican Press Office disputed Scalfari’s account, asserting that the Pope really does believe that hell exists and that “no quotation of the article should be considered as a faithful transcription of the words of the Holy Father.” Media outlets have noted in the past that Scalfari uses neither a tape recorder nor takes notes during his interviews, and has admitted that he reconstructs conversations according to his memory.

Following the report by the Italian journalist, Christopher Altieri of the UK-based Catholic Herald wrote: “Why on earth does Pope Francis still trust Eugenio Scalfari?” He called upon Francis to “disown not only the precise verbiage Scalfari reported in his piece, but the ideas foisted upon him therein—at least the ones that are manifestly heretical.”

“The longer he does not,” Altieri wrote, “the stronger the case becomes for believing he cannot.”

While Pope Francis has not chosen to grant an audience to cardinals who have formally questioned his teachings on marriage and salvation, he has met with other controversial figures. Recently, he met with Fr. James Martin, a fellow Jesuit who has been notable for his advocacy to normalize homosexuality within the Church. The pope has not met with Cardinals Raymond Burke and Walter Brandmuller, for instance, who along with two now-deceased prelates published their dubia questions about Amoris Laetitia in 2016.