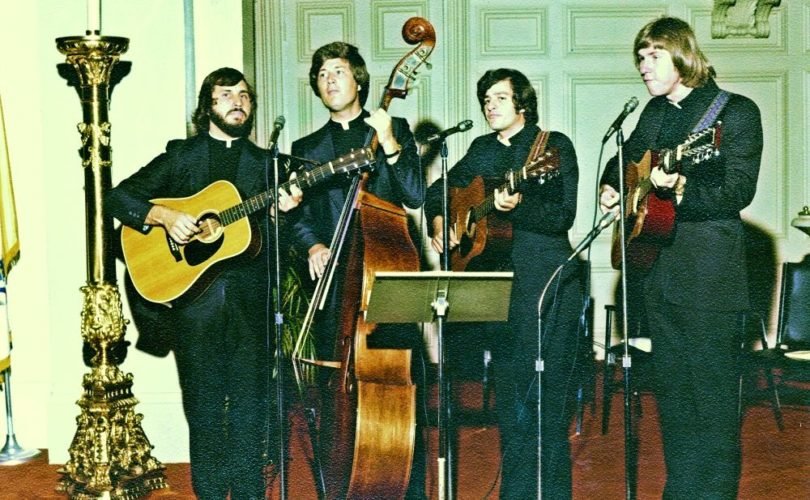 Seminarians, calling themselves The Dameans, set liturgical music to guitars in the 1970s. Photo credit: thecatholiccommentator.org

ROME, October 24, 2017 (LifeSiteNews) —  What might be the repercussions of Pope Francis’ public letter to Cardinal Robert Sarah, the Vatican’s liturgy chief, correcting him for seeking to rein in the Pope’s new liturgical decentralization?

To gain perspective on the significance and potential impact of the Pope’s letter to the cardinal, we spoke with Dr. Peter Kwasniewski, a prolific writer and international lecturer on the liturgy, as well as a cantor, conductor, and composer of sacred music.

LifeSite: Dr. Kwasniewski, what in your view is the most significant aspect of Pope Francis’ letter to Cardinal Sarah?

Dr. Kwasniewski: The most significant aspect by far is the rather blunt setting aside of key provisions of Liturgiam Authenticam, which was the fruit of years of responding to egregious difficulties and errors on the part of many vernacular translations. The original ICEL translation of the Roman Missal and other books was a pathetic travesty of the source texts and led to the entrenchment of numerous bad mental and liturgical habits. (As a bishop once said to a member of the original ICEL team: “I see the dynamism, but where’s the equivalency?”) The process that led to the new English translation, while certainly not perfect from any number of viewpoints, at least ensured a substantial correspondence in the lex orandi or law of prayer. I still notice when attending OF Masses [Novus Ordo] how much richer and more Catholic the texts are, in spite of their remaining defects in comparison with the traditional Roman Missal. In the Pope’s letter to Cardinal Sarah, it is clear that the principles for which Wojtyla and Ratzinger fought are being retired or sidelined so that we can go back to the 1970s – “always backwards, never forwards” seems to be the motto of the liturgical progressives, who are nostalgically stuck in a certain “spirit of Vatican II” mentality and cannot advance beyond the narrow agenda characteristic of that phase.

Can you please explain for readers what principles of Liturgiam Authenticam have been changed?

Liturgiam Authenticam seems to have been an attempt to halt the balkanization and banalization of worship that had taken over in almost every language, with the exalted beauty of liturgical texts being reduced to cartoon caricatures (e.g., “he took the cup” instead of “he took this precious chalice in his holy and venerable hands”). Liturgiam Authenticam had maintained that it was absolutely necessary for the Holy See to retain ultimate governance over translations of liturgical books, and that the Vatican can and should have final review of the texts, with the authority to change the texts. Magnum Principium and this new clarification are a reversal of that long-overdue course correction.

As the Church prays, so she believes. What long-term effects could these changes have on people’s faith?

When we see the phrase “legitimate adaptations,” we should recognize it as code language for experimental inculturation that breaks apart the substantial unity of the Roman Rite. Indeed, this has already been done by the hundreds of vernacular translations already in existence as well as the plethora of options in the new liturgical books, but in recent moves we are seeing an acceleration of regionalism and pluralism.

The episcopal conferences already have far too much power, which has taken away from the role and responsibility of individual bishops and of the Pope. It is not in keeping with the principle of subsidiarity because each bishop is supreme in his diocese, and the Pope is supreme over the whole Church; episcopal conferences are mere bureaucratic mechanisms having no inherent office, authority, or responsibility. One might compare them to the difference between individual sovereign nations and the United Nations. Already at the Second Vatican Council, when some of the Fathers expressed a desire that greater authority, independent of Rome, be vested in national episcopacies, other Fathers strongly countered, saying it would fragment the Church in her expressions of faith.

More deeply, the calling into question of Liturgiam Authenticam (n. 80, in particular) is a continuation of the Pope’s novel explanation of doctrinal development, where he sets aside the perennial principle of St. Vincent of Lerins, often cited by earlier Popes, that whenever something new is said — and we could consider a liturgical translation to be a new thing being said — it should always be in eodem dogmate, eodem sensu, eademque sententia — expressing the same doctrine, the same meaning, the same judgment. This is not at all the way progressives think about dogmatic definitions, moral teachings, or liturgical texts. All of these, for them, are permanently adaptable, changeable, even contradictable, depending on the supposed “progress” of society, culture, and mentality. It is an inherently evolutionist point of view, indebted to Hegel and Darwin, where one can get a fowl from a fish. Whether or not this is true about the natural world, it has never been believed to be true of sacred doctrine.

Dr. Kwasniewski, you have written extensively on the liturgical fallout after Vatican II. What do you anticipate might be the repercussions of the Pope’s letter and its contents?

The invoking of “comprehension of the [liturgical] text by the recipients” risks reintroducing the kind of rationalism that has made a wasteland out of Catholic liturgy. The liturgy, as a divine mystery and the work of God in our midst, cannot be comprehended by any man or even any angel. There are various ways into the liturgy, through the five senses and the intellect, and of course it should offer the faithful “handles” they can grasp in order to follow the unfolding rites. But a liturgy that aims to be simply and immediately understood is doomed to impoverishment, superficiality, and boredom. There is nothing to fascinate, bewilder, challenge, delight, or reward the participant. In the liturgy we aspire to put on the mind of Christ, which is the work of a lifetime. We have to go through darkness and light, ideas and feelings, silence, emptiness, self-discipline, suffering, buoyed up by the rich resources of our 2,000-year old tradition. The reduction of liturgy to a commonplace, horizontal, tidy, and effortless “understanding” is the great error and scourge of the past 50 years.

On the other hand, some claim — and I do not know how strong their claim is — that the new process put into place by Pope Francis will make it more difficult to secure a new translation, because it will require the unanimous consent of an entire bishops’ conference, rather than being in the hands of a steering committee working in tandem with the Congregation for Divine Worship to secure the latter’s approval. If this is true, it will make local change more difficult, which is probably a good thing at this point. Frankly, I cannot imagine the US bishops in general wanting to do another translation, or a substantial modification of the current translation, so soon after this was promulgated as the end result of an absurdly long process. I don’t imagine we’ll see changes right away. The real matter for concern, it seems to me, is how this is one more element in a larger campaign to undo the reformatory work of John Paul II and Benedict XVI, which was, in many ways, too little and too late, but is nonetheless the object of bitter hatred on the part of those who could never stomach the “conservatism” or even “traditionalism” of Wojtyla and Ratzinger.

Is there anything else you would like to add?

It occurs to me that there something important that needs saying. As you know, Cardinal Marx said that Magnum Principium frees up episcopal conferences and makes Liturgiam Authenticam a dead letter. (see here) Cardinal Sarah publicly disagreed with Marx on this point — and now Pope Francis is transmitting the signal that he is taking the side of Marx rather than Sarah, just as he has endorsed Cardinal Kasper’s position on communion for the divorced and remarried. In this way, the Pope is making it clearer all the time that he essentially stands with the German hierarchy, known to be one of the most liberal in the world, on the hot-button questions of the day.