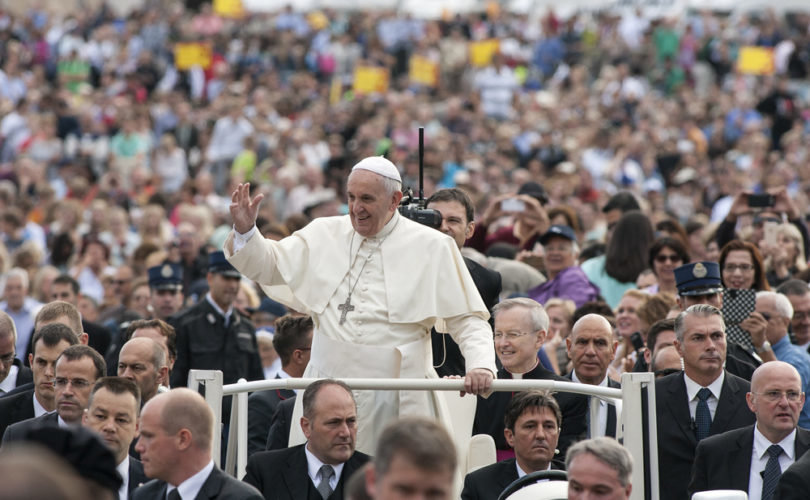 September 30, 2015 (LifeSiteNews) — After the initial thrill of the surprise news of Pope Francis’ meeting with embattled Kentucky County Clerk Kim Davis, some rather disturbing questions arose.  Those questions come in light of the secrecy of the meeting with Davis such that Vatican spokesman Father Benedettini told ABC News, “The Vatican does not confirm the meeting, nor does it deny the meeting. There will be no further information given.”

After reports began to circulate that Kim Davis was lying about her encounter with the pope, the Vatican did admit to the meeting. Spokesman Fr. Lombardi said, “I do not deny that the meeting took place, but I will not comment on it further.”

In light of the great fanfare and publicity around the pope’s meeting with President Obama, the United Nations, Congressional leaders, prisoners, and immigrants, many wondered why his two visits that underscored religious freedom were so intentionally hidden and downplayed.  His visit to the Little Sisters of the Poor was unscheduled too, but at least confirmed and photographs allowed release.

The impressions left by the bizarre discrepancies were noted with flair by a LifeSite reader in comments under our story on the news of the meeting with Davis:

This message resonates loud and clear to the priests, bishops and laity, 'Keep your belief inside the walls of your church. Don't embarrass a sitting head of state who agrees with your Big Picture. Illegal immigrants, the Secret Service will run them out to your motorcade for the foto op. Prisoners guilty of crimes, wash their feet but please make sure the cameras are there. Global warming, write a book, then go on tour. Same-sex marriage; abortion? Mention, but not in those harsh terms.' A lady being demonized and persecuted for standing on (old fashioned?) Christian values? Sneak her in. “No fotos, por favor.”

We are ever so grateful for the meeting with Kim Davis. It was likely the most important meeting the pope had while in the USA. However the secrecy of the Davis meeting and the downplaying of the Little Sisters meeting in light of the fanfare of the other meetings, leaves the impression that those high profile meetings were the real priority, when in truth it’s just the opposite.

The true priorities of the Catholic Church in the US political context were outlined by Cardinal Ratzinger in a letter addressed to US Bishops in 2004 just prior to his elevation to the pontificate.  The purpose of the letter, Worthiness to Receive Holy Communion, was to urge the US Bishops to deny Holy Communion to Catholic politicians who support abortion.  In doing so, Ratzinger drew a sharp distinction between, for example, abortion and the death penalty, noting the latter could be supported in good conscience while the former could not.

“Not all moral issues have the same moral weight as abortion and euthanasia,” said Cardinal Ratzinger. “For example, if a Catholic were to be at odds with the Holy Father on the application of capital punishment or on the decision to wage war, he would not for that reason be considered unworthy to present himself to receive Holy Communion.”

“There may be a legitimate diversity of opinion even among Catholics about waging war and applying the death penalty, but not however with regard to abortion and euthanasia,” concluded the soon-to-be Pope Benedict XVI.