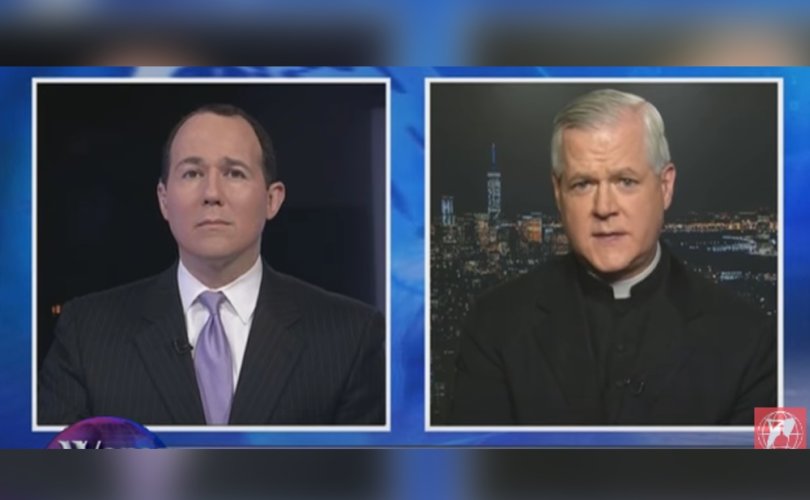 WASHINGTON, D.C., April 16, 2018 (LifeSiteNews) – The just-released apostolic exhortation on holiness, Gaudete et Exsultate (“Rejoice and Be Glad”), is stirring up controversy and seems to take aim at some of the Pope’s critics in the Church.

EWTN’s Raymond Arroyo and the “papal posse” broke down the “troubling” parts of the document on The World Over on April 12.

“Because of the divisions which have gotten worse under this papacy,” said Faith & Reason Institute President Robert Royal, when Pope Francis “puts out a document like this which is largely good, we can’t read it without suspicions, or … controversy.”

“There is a serious division now, and it comes to the fore even when he’s trying to deal with a relatively non-controversial subject like holiness,” he added.

“I enjoyed the parts which dealt with the supernatural life,” said Fr. Gerald Murray, a canon lawyer, “but I got to the section where the Pope deals with what he calls ‘neopelagianism’ and I just said to myself, ‘Wait a minute. What’s going on here?’”

“Then there’s another section on ‘neo-gnosticism,’” said Murray, adding, “These are, in my opinion, very serious problems in this document because he seems to be defending the controversial parts of Amoris Laetitia by lashing out at people who don’t agree with him. And I find that very, very troubling.”

Not infrequently, contrary to the promptings of the Spirit, the life of the Church can become a museum piece or the possession of a select few.  This can occur when some groups of Christians give excessive importance to certain rules, customs or ways of acting.  The Gospel then tends to be reduced and constricted, deprived of its  simplicity, allure and savour.  This may well be a subtle form of pelagianism, for it appears to subject the life of grace to certain human structures … only to end up fossilized … or corrupt.

“It seems to me he’s talking about those who object to what he wrote in the eighth chapter of Amoris Laetitia,” said Murray, “where he’s saying in some cases people who are in invalid second marriages can be given communion while remaining in those adulterous unions.”

“You cannot categorize obedience to the Ten Commandments as a defect,” said Murray. “And it is not ‘a museum’ to say that what Christ said 2,000 years ago is what I believe today.”

Murray feels that through this passage, the Pope is stigmatizing people who wonder, “Why are we changing what St. John Paul II told us to do?”

“If there are legitimate reasons why the Pope thinks his point of view about giving communion to the divorced and remarried can be defended on the basis of Catholic doctrine and tradition,” said Murray, he should “state them so we can have a dialogue. This seems to be a discussion-ender, where he basically with invective stigmatizes those who don’t agree with him.”

“I respect and love the Pope,” said Murray, “but Holy Father, when we think you’ve made a mistake, charity demands we tell you that.”

The exact opposite is true

The gnostic and pelagian sections are “very poorly-written and are not first-rate thinking on these subjects,” said Royal.

The bigger question, according to Royal is, “Is it true that in this moment of the history of the Church that the problem is rigidity? I think it is exactly the opposite…We’ve got scores of colleges and universities that churn out students who have maybe gone to Catholic schools their whole lives and have gone through four years of [Catholic] college and who know virtually nothing about the faith, and therefore respect very little about the rules about marriage, Confession, and communion.”

“It seems that on a large scale it’s the exact opposite of what he’s trying to present,” reiterated Royal. “Maybe in the past at some point there was this rigidity … but this is not even just a ‘Catholic thing.’”

“If you look around the secular world,” said Royal, “We’re living in a world that is ‘post-truth.’”

“We’re living in a world that is utterly chaotic, that has no fixed principles, so to want to hold on to some fundamental Catholic dogmas is not to be rigid, it’s to be sane … to seek sanity to in the utter chaos of the modern world.”

Can truth be an idol?

Arroyo noted that the Pope expressed similar concerns recently during the Vatican Chrism Mass, warning Catholics not to make idols out of truths.

“Truth is not an idol,” clarified Fr. Murray, saying he was “stunned” by the Pope’s assertion. The contrary is true: “Truth is the remedy to idolatry.”

“This is very, very troubling, and I would say to the Holy Father: ‘The problem in the modern world is not that people think that the truth is an idol. They just don’t care about the truth because it’s not defended properly.’”

“There’s something that has to be fought here, and I have to say, overall since the very beginning, the Pope has not really wanted to argue these things,” added Royal. “He kind of walks away from these questions about truth and dogma because they’re hard and we understand he’s trying to invite people in – but we cannot lose this, otherwise we have nothing to offer people.”

Does the Pope see immigration and abortion as equivalent evils?

Arroyo suggested that Gaudete et Exsultate seems to equate the pro-life cause with caring for migrants, putting them on the same moral plane. He wondered, “Is this a return to the ‘seamless garment’?”

Royal pointed out the most serious flaw in the seamless garment philosophy: “That argument has been used for years by the Democratic Party to basically do nothing.”

In fact, he said, it is used “to continue to support and foster an abortion culture in the United States. So by putting those things on an equal plane, it reduces the urgency of dealing with abortion, which … is the ongoing murder of human beings on a daily basis.”

It is not healthy to love silence while fleeing interaction with others, to want peace and quiet while avoiding activity, to seek prayer while disdaining service.  Everything can be accepted and integrated into our life in this world, and become a part of our path to holiness.

Arroyo called this a “kind of a sideswipe at Cardinal Sarah,” who authored a much-loved book titled The Power of Silence.

“If we were to bring forward what our contemplative tradition is,” said Royal, “there’s a whole segment of young people in the modern world who would pay attention because it would show that the Catholic tradition has something to offer – something the world doesn’t have to offer; something that the other religions don’t have.”

1
WATCH: Pro-abortion protester’s voice becomes ‘demonic’ as he claims to ‘love killing babies’
2
Catholic priest openly challenges Pope Francis: Are you a Freemason?
3
Pope appoints jailed bishop’s canon lawyer to investigate priests who testified to abuse
4
While the Supreme Court should be praised for overturning Roe, it didn’t go far enough
5
US bishop: Roe reversal a ‘step in the right direction’ toward protecting the ‘most innocent’
Subscribe to Daily Headlines »