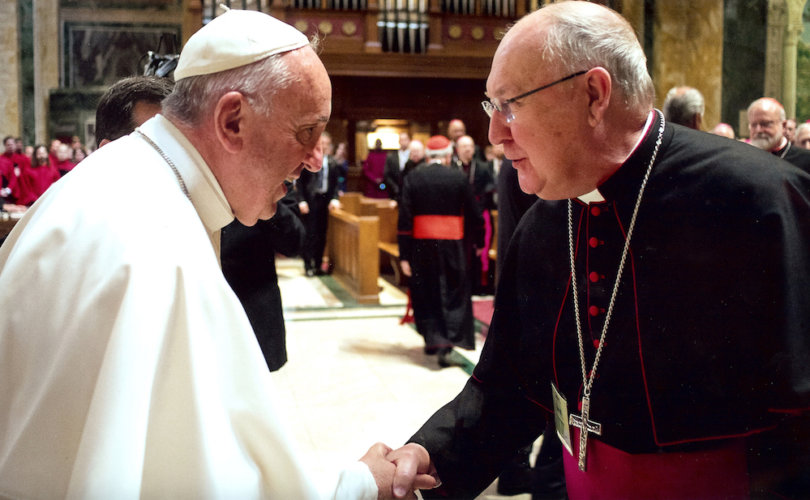 VATICAN CITY, October 14, 2016 (LifeSiteNews)–In a lengthy new interview, Bishop and soon-to-be cardinal Kevin Farrell said whether those in unions the Church labels adulterous may receive Communion is a “process of discernment and of conscience.” He says Amoris Laetitia “is the teaching of the Church,” comes from the Holy Spirit, and will be the “guiding document” of the new Vatican dicastery Pope Francis appointed him to head.

In August, Pope Francis named Farrell, the former bishop of Dallas, to lead the newly-formed Dicastery for the Laity, the Family and Life. The Pontifical Council for the Laity and to the Pontifical Council for the Family will be folded into this new dicastery. On Sunday, Pope Francis announced that Farrell had been named a cardinal along with two other U.S. bishops: Chicago Archbishop Blase Cupich and Indianapolis Archbishop Joseph Tobin (not to be confused with Rhode Island’s strongly pro-life Bishop Thomas Tobin).

The appointment of these three bishops as cardinals is a “seismic shift” in the American Catholic Church, according to Vatican expert John Allen Jr.,  because Farrell, Cupich, and Tobin belong “to the centrist, non-cultural warrior wing of the country’s hierarchy.”

Speaking to the National Catholic Reporter, long condemned for its open opposition to Church teaching, Farrell said, “I think that the document Amoris Laetitia is faithful to the doctrine and to the teaching of the church. It is carrying on the doctrine of Familiaris Consortio of John Paul II. I believe that passionately. Basically this is the Holy Spirit speaking to us.”

Familiaris Consortio championed the Catholic Church’s longstanding teaching that the divorced and remarried whose previous unions the Church has not declared null may not receive Holy Communion. Pope St. John Paul II wrote:

Amoris Laetitia’s footnote 351 seemingly suggests otherwise. “In certain cases, this can include the help of the sacraments,” the pope wrote of those living in objectively sinful and scandalous relationships.

The confusion and conflicting interpretations that flowed from Amoris Laetitia’s various ambiguities led 45 Catholic academics and scholars to write to the College of Cardinals asking them to call on Pope Francis to correct errant interpretations.

Some American bishops, like Philadelphia Archbishop Charles Chaput and Portland Archbishop Alexander Sample, have said that Amoris Laetitia must be read in continuity with the Church’s teaching and does not allow for a sacrilegious change in sacramental practice.

“I honestly don't see what and why some bishops seem to think that they have to interpret this document. I believe that the pope has spoken,” Farrell said. According to to the National Catholic Reporter, this was a reference to the support Pope Francis expressed to the bishops of Buenos Aires for their pastoral guidelines allowing Communion for the divorced and remarried.

There is “no other interpretation” of the exhortation, the pontiff wrote to the Argentine bishops in a letter the Vatican confirmed as authentic.

“I firmly believe [Amoris Laetitia] is the teaching of the church,” said Farrell. “This is a pastoral document telling us how we should proceed. I believe we should take it as it is.”

Farrell said he wasn’t necessarily saying the divorced and remarried should receive Communion.

“That's a process of discernment and of conscience,” and a “journey,” he said. “The priest, the pastor needs to accompany people in difficult situations.”

Farrell told the National Catholic Reporter the divorced and remarried should be included “in all the ministries of the church.”

He did not specify but that would seem to include public positions like religious education instructors, parish music directors, and even Extraordinary Ministers of Holy Communion. Orthodox Catholic leaders oppose allowing those publicly contradicting the Church’s teaching to hold public parish roles because doing so could give the impression of approval and thus cause scandal.

For example, in the Archdiocese of Philadelphia’s new pastoral guidelines, Chaput wrote:

…care must be taken to avoid the unintended appearance of an endorsement of divorce and civil remarriage; thus, divorced and civilly remarried persons should not hold positions of responsibility in a parish (e.g. on a parish council), nor should they carry out liturgical ministries or functions (e.g., lector, extraordinary minister of Holy Communion).

“I think that we all need to read [Amoris Laetitia] many, many times,” said Farrell.

Farrell’s apparent reference to the Buenos Aires letter and the pope’s support for Communion for remarried divorcees joins a more explicit statement one of the other new U.S. cardinals made to an Italian newspaper this week.

Cardinal-elect Blase Cupich, archbishop of Chicago, explicitly referenced the Buenos Aires letter and the support Pope Francis gave it. Cupich said he agrees with Pope Francis and Cardinal Christoph Schönborn on the issue.