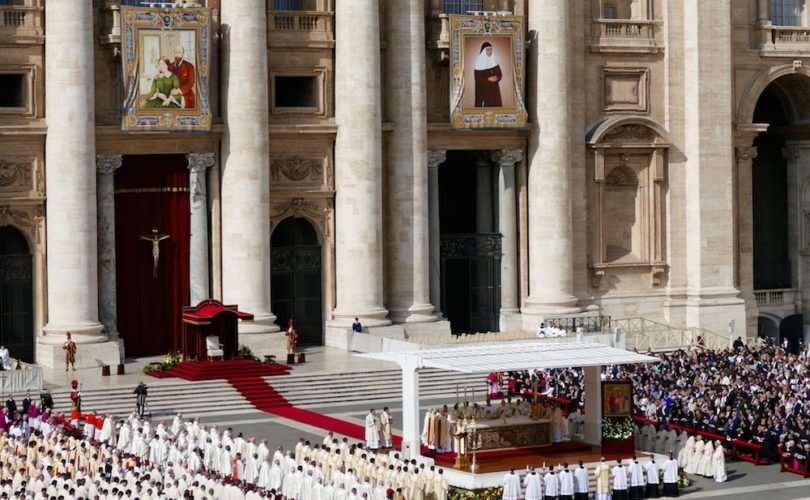 Pope Francis offers the Mass of Canonization for Louis and Zélie Martin, parents of Saint Thérèse of Lisieux, in 2015.John-Henry Westen / LifeSiteNews

July 12, 2017 (LifeSiteNews) — Priests, professors, and canon lawyers have read Pope Francis’ innovative motu proprio “Maiorem hac dilectionem” and found that it solves one problem but could create new ones.

“Maiorem” has opened the canonization procedures of the Roman Catholic Church to candidates who have voluntarily given their lives, in charity, for others.

Although dubious about the great number of causes for beatification underway today, Father John Zuhlsdorf of “Father Z’s Blog” approves of the new path to sainthood.

“This new category of ‘offering of life’ fills a gap,” he wrote. “For example, the undoubtedly great St. Maximilian Kolbe was beatified as a Confessor by Paul VI in 1971 but canonized as a saint by John Paul II in 1982 as a martyr, not a confessor.”

It’s a question of categories, Zuhlsdorf believes. The Church needed to build a bridge between those who died for being Catholic and those Catholics who died for others. “The dedicated Nazi death camp murderers probably hated the Church, the Faith and priests and had no problem killing them,” said Zuhlsdorf. “However, St. Maximilian offered his own life in place of another prisoner. It could be argued that he wasn’t killed because of the Faith but because of his offer. His interesting, and heroic, case could be addressed by this new category of iter [path], the vitae oblatio [offering of life].”

Father Zuhlsdorf also offered as an example St, Gianna Beretta Molla (1922-1962), an Italian mother who risked death rather than abort her child and did, indeed, die.

Canon lawyer Ed Peters’ feelings about “Maiorem” are mixed. He thinks the motu proprio does well by addressing the “awkward notion of ‘martyr of charity’ developed by John Paul II” to cover such cases as that of St. Maxmillian Kolbe. This use of the word “martyr” is, in Peters’ opinion, a distortion. Francis’ new category makes it possible for canonists to maintain, without accusations of impiety, that not every Catholic who dies as a victim of religious persecution is a martyr for the faith.

Nevertheless, Peters objects to the criteria listed by “Maiorem,” above all the direction that “those who have ‘voluntarily and freely offered their lives for others and have persevered until death in this regard’ are eligible for canonization.”

“Problem,” Peters blogged. “This status includes tens of thousands of soldiers, policemen, firemen, and countless others whom, we all know, put their lives on the line for others constantly and in many cases do, in fact, ‘voluntarily and freely offer their lives for others.’ He notes, too, that others have done so spontaneously. Thus, local churches and eventually Rome “could be deluged with sympathetic petitions. Deluged.”

Theologian Peter Kwasniewski told LifeSiteNews that his first look at “Maiorem” left him puzzled. “That there would be … grounds for sainthood besides martyrdom and heroic virtue as traditionally understood makes little sense to me. Ordinary virtue, a reputation for holiness, and giving one’s life to a charitable cause that leads to premature death, do not seem like an especially ‘high bar.’”

“It’s not that these people are not very good and singing with the angels in heaven,” Kwasniewski clarified. “It’s just that the beatified and canonized saints are supposed to be exceptionally outstanding exemplars of virtue. … The standards are ridiculously high because blessed and saints will be held aloft as universal images of Christ. The standards ought to be this high.”