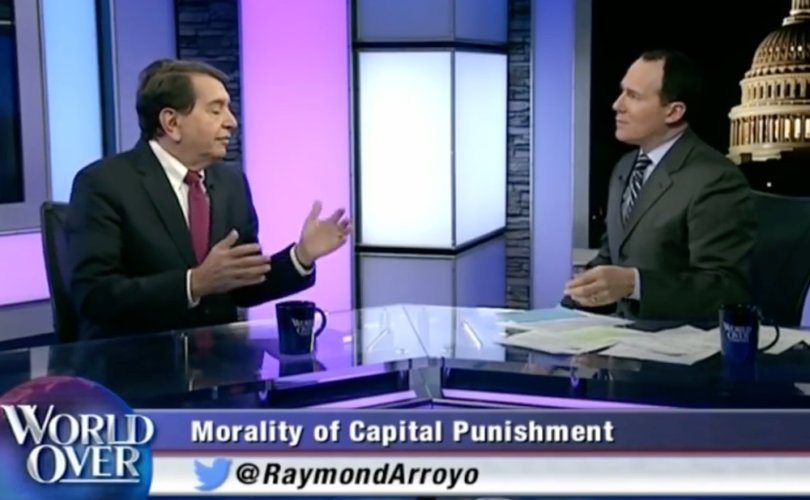 Canonist Father Gerald Murray and writer Robert Royal, known to EWTN audiences as the “Papal Posse”, discussed Pope Francis’ change to catechetical teachings on the death penalty with host Raymond Arroyo on his “The World Over” show.

Calling the Pope’s innovation a “bombshell”, Arroyo contrasted the “Old Teaching” which allowed for capital punishment in the “very rare, if not practically non-existent” circumstances when it was “absolutely necessary” with the “New Teaching” that the “death penalty is inadmissible because it is an attack on the inviolability and dignity of the person.”

Murray told Arroyo that the Pope’s action was “very troubling” because it went against Church doctrine.

“…He is directly contradicting the perennial teaching of the Church on the morality of the death penalty,” the priest said. “It was once considered moral, perfectly good, in fact, something that was in accord with Divine revelation.”

Robert Royal wondered why Pope Francis’ new teaching was necessary. He observed that Pope John Paul II had already promulgated the idea that the reasons for capital punishment are “practically non-existent”.

‘That I think is about as far as you can go as a pope in talking about this,” Royal said.

Murray said he had difficulty understanding why Pope Francis said that to execute a person guilty of a serious crime violated the dignity of the human person.

“We have an ontological dignity as created by God,” he stated. “We have a supernatural dignity as baptized persons. And the dignity of the human being adheres in him. He cannot lose his dignity no matter what other people do to him, or even what he does to himself.”

Nevertheless, the human person can certainly lose the exercise of certain rights, Murray believes, which is why there is incarceration and any punishment for crime at all.

The priest believes that the Church was right to permit capital punishment in the past, and he does not believe Pope Francis can say that she wasn’t.

“To say that the Catholic Church violated the dignity of people until now by saying that it was moral for certain criminals to be executed, I have a great problem in accepting that,” Murray said. “I do not believe that the teaching of the Church up to this moment is immoral, and I don’t think the pope has the power to change that teaching.”

“His job as pope is to preserve and uphold the doctrine of the faith, not to rewrite it.”

Robert Royal concurred that the pope can’t change doctrine, saying “It seems to me that this goes beyond his proper authority.”

He agreed with Arroyo that sometimes the death penalty is a practical necessity, not only in developing countries, where an expensive prison system is an injustice to poor and even starving populations, but in the USA, in light of recent murders of correction officers by inmates.

He suggested that Pope Francis is “sentimental” in his approach to the question of human dignity, and Gerald Murray later pointed out that “human dignity” includes everyone else, including murder victims.  Human dignity is not about evading just punishment.

“In fact,” said Royal, “it is one expression of respecting a person’s human dignity to hold them responsible when they do a terrible thing.”

Murray said that the question of any punishment had come up, especially as there is at least one much more serious penalty than capital punishment.

“Is it an offence against human dignity for God to damn someone to hell?” he asked. “We say no. If someone is deserving of eternal punishment in hell, then that is in accordance with the divine will, and that’s a good thing.”

Raymond Arroyo cited the late Cardinal Avery Dulles, an authority on the licitness of the death penalty, saying that capital punishment can be merciful, as the knowledge of impending death can bring the condemned into a state of redemption.

Asked if Pope Francis’ change to doctrine was an “evolution or a break,” both Royal and Murray said it was a break. Royal also noted that Francis has also spoken out against life imprisonment and even the eternal punishment of the damned.

Murray disagreed with Cardinal Ladaria’s claims that Francis’ change to the catechism was in “continuity” with doctrine.

He said he found it worrying because the death penalty was a particular target of liberals, and liberals have a lot of targets besides it, including Catholic teachings on marriage and sexuality.

“Are all of those things going to be subject to an evolving societal understanding?” he wondered.

Royal agreed that to change teaching on life and death would have “incalculable consequences in all sort of different areas.”

LGBT ‘Catholic’ groups have already put forward the position that if the Pope can reverse Church teaching on the death penalty, then he should be able to do the same for homosexuality.