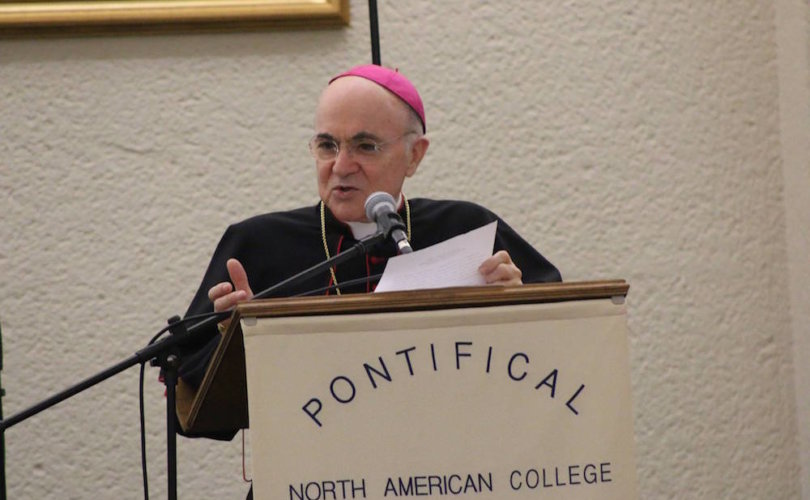 VATICAN CITY, April 12, 2016 (LifeSiteNews) – The pope’s ambassador to the United States encouraged U.S. seminarians studying abroad for the priesthood to courageously defend religious freedom back home, including in the public square, and to “be strong in the face of evil.”

“Each one of us has a responsibility before God to bring a message of truth into this world, even if it means spending our lives for that very purpose—sometimes silently, but very often today publicly,” Archbishop Carlo Maria Vigano told some 400-plus guests at the April 7 Rector’s Dinner at the Pontifical North American College in Rome.

Archbishop Vigano spoke mere days before Pope Francis named Archbishop Christophe Pierre as Vigano’s successor in the post of US nuncio. The archbishop, who has served since 2011, reached retirement age this past January.

The French-born Pierre, currently nuncio to Mexico, is a “Bergoglian” and someone in whom Pope Francis confides, according to Vatican expert Sandro Magister.

In his address at the Pontifical North American College, Vigano cited the Holy Father’s address before Congress during his recent U.S. visit, and said it meant a lot for him to hear the pontiff describe America as “the land of the free and the home of the brave.”

“Now, perhaps more than ever, this phrase should be something we continue to live for and pray for,” Archbishop Vigano told those assembled at the U.S. Bishops’ seminary, “that the United States of America will protect our freedom, especially our religious liberty, as well as respect the human right to conscientious objection, and that we will be courageous in always defending the freedom to put our Catholic faith into practice without fear.”

The retiring papal envoy had received the 2016 Rector’s Award at the annual gathering supporting the Pontifical North American College, along with California attorney Timothy Busch and his wife Steph, members of the Papal Foundation and benefactors of the Napa Institute, which works to develop Catholic leaders in the U.S.

Last year Archbishop Vigano was maligned by homosexual activists and the Left for his ostensive role in setting up Pope Francis’ private meeting with embattled clerk Kim Davis during the pope’s visit, with homosexual supporters petitioning the archbishop to resign for his part in the meeting.

Some speculate, in the midst of the Vatican’s botching of the media message on the incident, that the pope’s U.S. ambassador was left to take the public heat for the meeting with the Kentucky county clerk, whose religious convictions led to her decline to put her name on homosexual “marriage” licenses and made her a national symbol for religious freedom.

He had urged the U.S. Bishops Conference at their 2015 fall meeting to defend the natural family and Catholic identity in education, receiving two enthusiastic standing ovations from the assembly.

The archbishop has spoken out before on the need to defend religious liberty, saying at a 2012 Notre Dame University appearance that Catholic professors and public officials who defy Church teaching on fundamental issues such as abortion and marriage constitute a “grave” threat to religious freedom.

During what was likely his final public address as nuncio, the prelate encouraged the seminarians at the Pontifical North American College to take advantage of their time there, and said the College’s mission was to teach the future Church leadership in America “to be strong, to be virtuous, to be valiant witnesses to the message of Jesus: “The Truth will make you free.”

Archbishop Vigano also called for courage and strength in the midst of persecution.

“This is an age when we need great courage—courage to stand up for the Truth, even when we are not understood, or persecuted when we are understood,” he stated. “We need to be strong in the face of evil.”