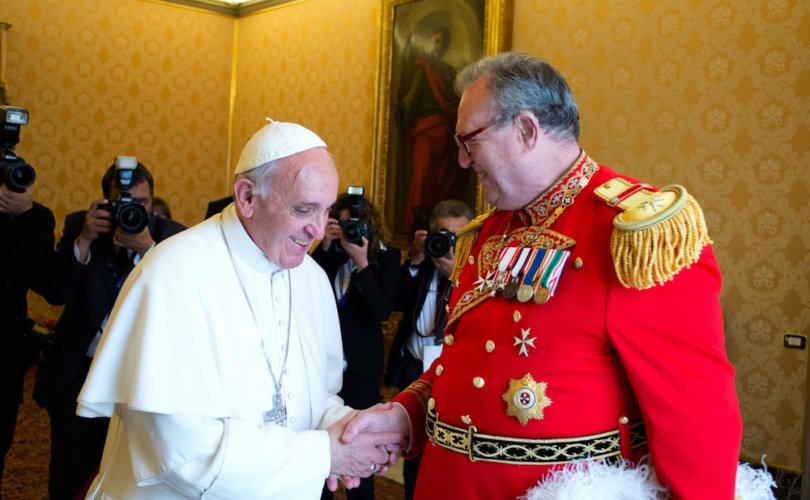 ROME, February 8, 2017 (LifeSiteNews) – Pope Francis’ reform of the Knights of Malta could gut the very “heart” of the Order and up-end its 900-year-old constitution.

Members of the Order who spoke to LifeSiteNews under condition of anonymity say such drastic fears have been stoked by the Pope’s unprecedented intervention in the Order in the last month.

Pope Francis has appointed Archbishop Giovanni Angelo Becciu as his special delegate to the Knights of Malta and entrusted him the task of reforming the lay Order’s religious branch of professed Knights, called the “First Class,” who take vows of poverty, chastity, and obedience.

Members of the Order say the reform could overturn the 900-year-old practice of having a professed Knight of noble lineage at the Order’s helm. Instead, the role of Grand Master could be opened to members of the Order’s non-professed Second or Third Class. It would be conceivable that a change of that nature could also be achieved by a Papal dispensation.

That would allow German nobleman Albrecht von Boesalager, who the Vatican has just reinstated to the Sovereign Council and given even greater power, to run for the post. Or another German noble of the same mindset could be placed in the position.

That a change in the eligibility for Grand Master would be opened up is further supported by the fact that as of now, only 10 other members of the Order would be possible contenders for the post – a majority of them of very old age.

However, the First Class members, called the “Knights of Justice,” have constituted the heart of the Order from its very beginning in the 12th century and have been key to upholding its moral character.

“The professed knights give the Order its unique character as a Catholic lay religious and chivalric community.  They are the continuous historical thread that binds us together through 900 years of history and are major bulwark of legitimacy against the claims of false orders who misuse our name for their own purposes,” a Knight, who wishes to remain anonymous, told LifeSiteNews on February 7.

Archbishop Becciu is endowed with an exceptional responsibility: It will be his job to re-establish peace between the Vatican and the Order, and between the internal factions of the Order, namely Boeselager with his supporters – primarily German nobles – and the professed religious knights. One of Becciu’s powers would be to review possible constitution changes according to the intentions of the Pope.

Archbishop Becciu is the Substitute for General Affairs of the Vatican’s Secretariat of State and was appointed by Pope Benedict XVI on May 10, 2011. He is the closest collaborator of Cardinal Secretary of State Pietro Parolin and counts as his associate.

Pope Francis expressed his trust in his personal delegate in a published Vatican letter written to Archbishop Becciu dated February 2. In it Pope Francis urges him to work closely together with Fra’ Ludwig Hoffmann von Rumerstein, the interim head of the Order. This follows Fra’ Matthew Festing’s resignation as Grand Master on January 24, now accepted by the Order’s own Sovereign Council.

In a heated press conference on February 2 with Albrecht von Boeselager and two other high ranking officials, it emerged clearly that Pope Francis wishes for a “reform” of the religious branch of the Order and that a new Grand Master will be elected around the end of April at the end of Becciu’s visitation.

In light of the upcoming election of the Grand Master, members of the Order who spoke to LifeSiteNews anonymously said it is possible the reform could open the high government of the Order to non-professed.

“The Order’s sovereignty, which is so useful in our global charitable activities, is greatly enhanced by having a professed knight as Grand Master.  We recognize that such a leader is called by God to that role and is not simply one of the rest of us,” the Knight told LifeSiteNews.

“I am not an expert in canon law, but I find it difficult to conceive of a situation where men who have taken vows of poverty, chastity, and obedience report to a man who has not.”

As the oldest chivalric order, the Knights of Malta also are endowed with the oldest medical mission in the world. The Order has 13,500 members, 80,000 permanent volunteers, and 25,000 professional staff – mostly doctors and paramedics who help in humanitarian crises giving relief for refugees, in war zones, and in areas hit by natural disasters as well as in hospitals.

Were the religious members ostracized from the central government, then the Order would be transformed into nothing more than a Catholic NGO, of which there are already many. Possible corollaries would also include the discernment of many Knights and Dames as to whether or not to remain part of this hitherto unique entity or rather join another one of the widespread Catholic charitable entities that may be much closer to their home.

Also, as stated in the Feb. 2 press conference, Becciu will be the chief link between Pope Francis and the Order. This sidelines Cardinal Raymond Burke in his function as patron of the Order.

The Pope wrote to Becciu: “I delegate to you all necessary powers to determine any issues that may arise concerning the implementation of the mandate entrusted to you.”

As Cardinal Patron it is part of Cardinal Burke’s office to represent the Supreme Pontiff to the Sovereign Order of Malta. His special authority is in charge of promoting the spiritual interests of the Order and its members as well as the relation between the Holy See and the Order.

With Becciu’s appointment, Cardinal Burke will cease to have influence in exactly the two domains that make up his special and unique office, thereby being de facto discharged.