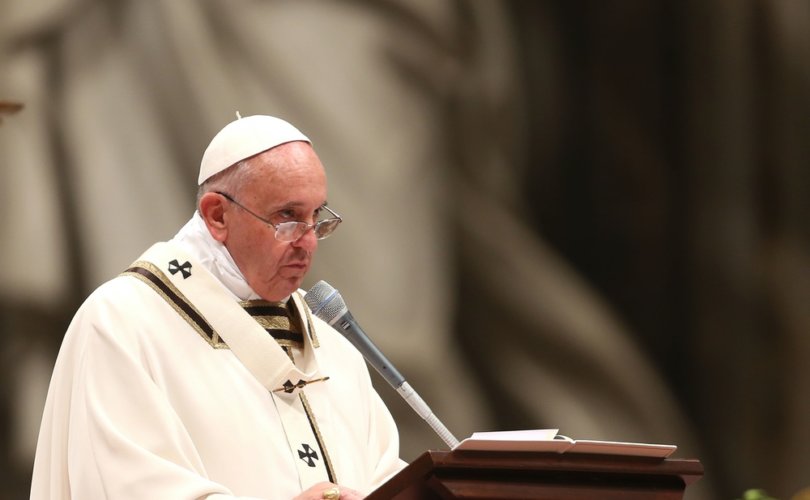 ROME, February 4, 2020 (LifeSiteNews) — In line with Pope Francis’ controversial criticism of the sixth petition of the Lord’s Prayer, the Italian Bishops’ Conference has announced it will introduce a revised translation in the coming months.

The Missal containing the new version of the Our Father will be published in Eastertide and introduced into the liturgy at the beginning of Advent, Archbishop Bruno Forte told Italian media during an international theological forum held at Lateran University in Rome on January 27.

At present all vernacular translations (with the exception of the French, which has already been changed) of the “Our Father” correspond to the Latin of the Vulgate, which reads: et ne nos inducas in tentationem … lead us not into temptation, and is rendered in Italian, non ci indurre in tentazione.

Pope Francis, in an interview on Italian television in 2017, described this translation universally adopted from immemorial antiquity as “not good.”

With the Pope’s support (and some would argue pressure) the Italian Bishops’ Conference has therefore decided to change the text to, non abbandonarci alla tentazione, i.e. do not abandon us to temptation.

Scholars of ancient Greek and leaders of Protestant denominations have greeted the proposed changes with amused skepticism, overwhelmingly insisting that the traditional versions are authentic, idiomatic, and literal renderings of the Greek. The Chair of Classics at the University of Cambridge, one of the most prestigious academic positions in England, famously said: “‘Not a good translation’ indeed! Doesn’t say what I want it to, more like.”

The Evangelical church in Germany has also defended the traditional translation as “linguistically correct and good German as well,” adding that they intend to “stick with it.”

In his 2017 television interview, Pope Francis said that the reason he doesn’t like the traditional translation is because “it’s not [God] who throws me into temptation, in order to then see how I’ve fallen. No, a father doesn’t do this … The one who leads us into temptation is Satan. That’s Satan’s task,” he said.

But Swiss linguist and biblical scholar, Fr. Reto Nay, told LifeSite in a 2018 interview that he doesn’t consider there to be any difficulty reconciling the concept of God “leading us into temptation” with the rest of Scripture.

Contrary to La Repubblica’s recent characterization of the revision as “more correct,” the Swiss polyglot said he as “no idea” where the “and do not abandon us to temptation” comes from linguistically or spiritually.

In fact, he said, “it seems to insinuate that God actually could ‘abandon’ us in temptation which comes close to blasphemy because it puts the blame on God when we abandon him.”

How ought one properly to understand “and lead us not into temptation”?

The seeming difficulty of the sentence is the understanding of “temptation” as if the Father would lead us into a temptation which He himself has created for us. However, the text does not say that God is the originator of the temptation; the devil is or men. Look at Acts 20:19 where Saint Paul speaks about “the temptations that came to me through the plots of the Jews.” In this sense, Christ is led into the wilderness by the Holy Spirit “to be tempted by the devil” (Mt 4:1). Such temptations are not surprising as “all who want to live a godly life in Christ Jesus will be persecuted” (2 Tim 3:12). Persecution is a kind of temptation. Therefore, the Our Father asks God that the temptations of the End times may be mitigated and this way we may be “delivered from evil” in the final apocalyptic battle that awaits all saints. Remember that Mt 24:22 says that “if those days had not been cut short, no one would be saved; but for the sake of the elect those days will be cut short.” This shortcut is a way through which the Father will lead us past the temptations of the end.

Asked how this petition relates to temptations in our daily lives, the biblical scholar said: