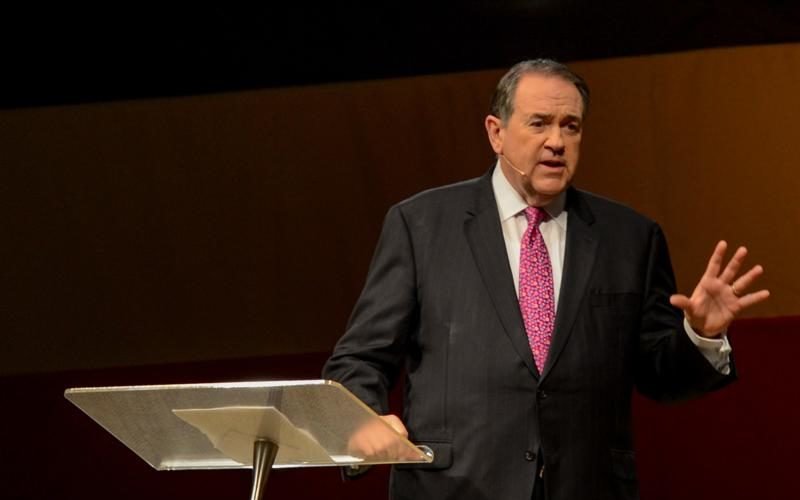 He said while political and media “elites” were overjoyed that Pope Francis highlighted environmental concerns, “the pope was having a quiet and powerful meeting with a humble Apostolic [Christian] county clerk from Kentucky.”

“The media mocked and derided millions of Americans who supported Kim's constitutional right to religious liberty,” Huckabee said. “The pope recognized something that the chattering class in Washington and Wall Street will never understand — that Kim Davis followed her conscience and convictions.”

“Thank you for your courage,” Pope Francis told Davis before encouraging her to “stay strong” and holding both her hands in his. They then hugged, according to Davis.

The pope then gave her and her husband, Joe, rosaries that he had personally blessed. They plan to give them to her parents, who are Roman Catholic.

Unlike other visits during the pope's six-day tour there was no media coverage and, initially, no confirmation the event had even taken place.

Vatican spokesman Fr. Ciro Benedettini initially told ABC News that “the Vatican does not confirm the meeting, nor does it deny the meeting. There will be no further information given.”

The non-response fueled speculation that Kim Davis lied about the meeting for her own purposes.

Another Vatican spokesman, Fr. Federico Lombardi, later confirmed that the meeting took place inside the Vatican Embassy – and gave a reason that there had been no broadcast exposure. “That meeting with the pope and the Little Sisters [of the Poor] was a specific event,” which he changed his schedule to attend, he told the New York Times.

While photographers were present, no photos of the event have surfaced.

Huckabee hopes that reports of the visit by Pope Francis, who is popular with American liberals, will cause them to reconsider their opposition to granting public officials like Davis – and Christian bakers, photographers, and pizzeria owners – religious accommodations for their deeply held beliefs.

“It may just be a visit from the pope that pushes the out of touch political class in Washington to finally stand up to judicial tyranny and stand for religious liberty,” Gov. Huckabee said.

That view is endorsed by Pope Francis who, when asked by a reporter on his return trip, said, “Conscientious objection must enter into every juridical structure because it is a right.”

Earlier this month, Mike Huckabee offered to go to jail in Kim Davis' place, if she were again held in contempt of court for obeying her Biblical views on sexuality.

Next year, Davis may be able to vote for Huckabee in the 2016 presidential primaries. She recently changed her party registration from Democrat to Republican, saying the Democratic Party “left me a long time ago.”