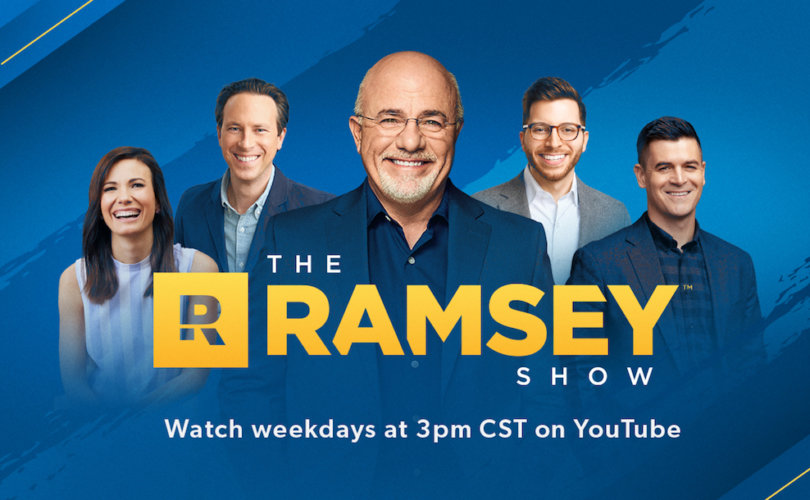 FRANKLIN, Tennessee (LifeSiteNews) – Two hosts filling in for Dave Ramsey on “The Ramsey Show” helped coach a homosexual male college student on how to start thinking about a future “marriage” to his “boyfriend.”

Ramsey is an evangelical Christian whose popular program teaches people how to get out of debt, save for retirement, and build wealth so they can “live and give like no one else.”

Unlike other financial shows, his advice is not purely mathematical but includes a religious element to it, replete with Biblical verses and references to his faith. “There’s ultimately only one way to financial peace, and that’s to walk daily with the Prince of Peace, Christ Jesus,” Ramsey says to end his shows.

But two personalities in his company were not as focused on Biblically-based advice during a recent episode.

Eric, a college student from Harrisburg, Pennsylvania, called into the show on Friday and asked hosts George Kamel and Rachel Cruze “when the right time is to bring up the finance question” in his relationship with his homosexual partner of six months.

“As you’re heading towards … a more serious commitment like a marriage, I think you can start talking about values now and where you stand on your views on debt and money,” Kamel told the caller. “Because we’re not combining any finances until marriage,” Kamel said.

Cruze, who is Dave Ramsey’s daughter, joined in with her co-host to reiterate that financial talks should be had when someone knows they will be marrying someone. “I mean with anyone when it comes to relationships…when you know, ‘Okay, I’m going to be doing life with this person getting married and we have our future ahead right?’”

“And so when that happens that’s when all conversations get around it gets real about every subject and then needs to include money for sure,” Cruze said.

“Once you’re married and you’re realizing ‘Oh, wow, we have to actually do life together,’ that’s when it gets complicated,” Cruze said.

“Yeah so are there fears right now, Eric when it comes to finances and what the takes are?” Kamel asked, again helping the college student think about how to plan for a future with his “boyfriend.” After the caller briefly spoke about debt and student loans, Kamel gave him some more questions to consider to help him plan for a life with his homosexual partner.

“Well I think the key here is how aggressive is he about wanting to pay these loans off,” Kamel said. “It’s more about the mindset and the values when it comes to money.”

Ramsey Solutions did not return a request for comment sent on Monday morning. LifeSiteNews asked if there was a reason that the hosts helped coach a homosexual on how to plan for a future in sin with another man.

LifeSiteNews also provided examples of the show counseling people away from cohabitation, accepting church donations from marijuana businesses, and hiding finances from a spouse, and asked if those are considered more serious issues to the company or Dave Ramsey than homosexuality is.

1
Pope Francis breaks silence on Roe reversal, criticizes denying Communion to pro-abortion politicians
2
Abp. Viganò: ‘Pride’ movement is satanic, must be conquered by ‘reparation,’ charity
3
Pope Francis bans priest who publicly challenged him from all public ministry
4
Why did the Vatican issue such a joyless statement in response to the overturning of Roe v. Wade?
5
Dr. Jordan Peterson promotes homosexual ‘marriage’ and parenting in interview with Dave Rubin
Subscribe to Daily Headlines »