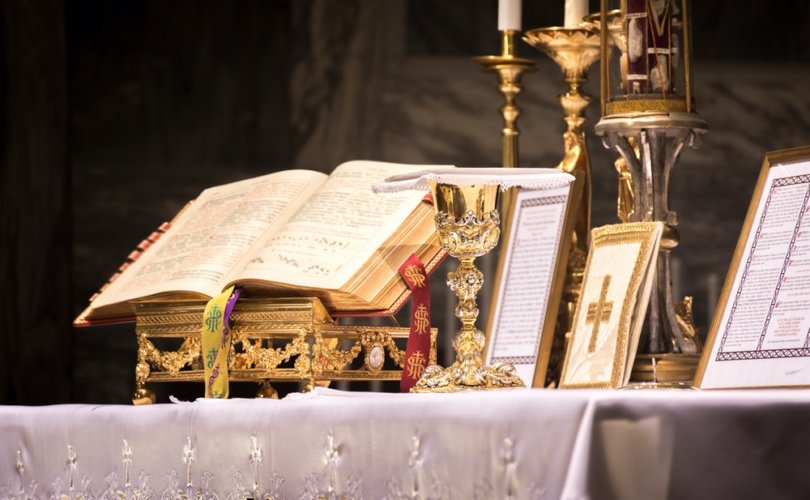 WASHINGTON, D.C. (LifeSiteNews) – A priest called on bishops to be pastoral while dealing with Catholics who attend the Traditional Latin Mass (TLM) in light of the Responsa ad Dubia.

Msgr. Charles Pope, writing in the National Catholic Register, reacted to the Responsa ad Dubia released by Archbishop Arthur Roche of the Congregation for Divine Worship that severely limited access to the TLM and traditional sacraments, asked the bishops to act pastorally toward Catholics attached to the TLM. Pope, a priest for the Archdiocese of Washington, D.C., says he has not “seen such language or harshness directed against any other group, in or outside of the Church,” calling the responsa “singular and shocking.”

“While the good archbishop says there is no intent to marginalize Catholics devoted to the TLM, marginalization is the actual effect of such an edict,” Msgr. Pope wrote. “How is it possible to read the [responsa] as anything but as an annoyed tolerance at best, or an outright rejection at worst?” Pope added that “dissenters and even abortion activists are treated better than this.”

Pope also noted that the responsa seems to limit the canonical rights of bishops, asking whether a prefect in Rome can “deny the canonical right of a bishop to dispense with disciplinary norms for the good of the faithful,” or if a bishop should “really have to ask permission of Rome to exercise a right he already has.”

Pope maintains that bishops need to deal with the responsia with pastoral care, something that he says many bishops have done with Traditiones Custodes, the document released by Pope Francis last July limiting the celebration of the TLM.

“We can only pray for bishops to make careful, courageous and pastoral decisions that may place them in tension with the Congregation for Divine Worship,” Msgr. Pope said. Speaking about his own diocese, Pope says that “we decided decades ago that the best policy was to incorporate the TLM into certain approved parish settings. We did not think it was healthy or wise to seclude traditional Catholics in specialized churches.” Noting the size of the Archdiocese of Washington and other larger dioceses, Pope says that “a [non-parish] setting may not be feasible to adequately supply the needed sites to assist the faithful.”

Vatican II and the Liturgy

Msgr. Pope noted in his op-ed that some older Catholics tend to couple the discussion about the liturgy with the Second Vatican Council. Speaking about the NO, Pope said “the Mass that came forth in 1970 went beyond what the Council Fathers envisioned – in fact, the TLM looks a lot more like what the Council spoke of than the ordinary form that we have today.” “It is simplistic and wrong to identify the current form of the Mass with Vatican II or to claim that those who love the TLM thereby reject the Council,” Msgr. Pope concluded.

He also suggested that those debating the topic of Vatican II and the liturgy would “do well to study that period and ponder what was authentic and what may have strayed from what the Council Fathers set forth.”

Scholar and author Dr. Peter Kwasniewski told LifeSiteNews via email that most Catholics who go to the Traditional Latin Mass aren’t rebelling against Vatican II, let alone its document addressing possible changes to the Mass.

“In itself, the liturgical reform is obviously connected to the Council, and the question remains both of whether the reform plan of the Council was a good one prudentially, and whether the actual reform corresponded to what Sacrosanctum Consilium  says and what the Fathers expected and voted for,” he wrote.

“But in practice most who attend the TLM don’t know much about Vatican II and certainly are not attending the TLM because they are anti-Vatican II. In fact, it’s probably a non-question for the majority — something they don’t bother about as they live their day-to-day lives in the 2020s. So, yes, theologians have to wrestle with certain problems, while laity should be left alone to worship God in peace, in accordance with Catholic tradition, if that is what they find spiritually fruitful (and how could it not be? it was for countless saints).”

Kwasniewski also asserted that the Vatican “does not have the authority to suspend or suppress the most ancient and venerable rite of the Latin Church.”

“Those who attempt to do so would instead make schismatics of themselves, separating from the consistent practice and teaching of the Catholic Church over the centuries,” he continued.

“It is impossible to believe that worshiping with the traditional Roman Rite, in and of itself, could ever be a problem, except for modernist ideologues who already dissent from Trent and from the content of the lex orandi of the past millennium.”

Meanwhile, the scholar believes most bishops will do their best to accommodate Catholics who love the TLM.

“It seems to me fair to think that most bishops will find a modus vivendi for their flocks, since they did not ask for this wound to be ripped open again,” he said.

“Some few will come down hard on the traditional Mass and sacramental rites, and some few will provide them more generously, but the majority, I think, will try to bide their time, find compromises, wink at exceptions, that sort of thing,” he added.

“It’s not as if this is the first time in Church history that a decree from Rome has had to be held at arm’s length because it simply doesn’t fit the situation on the ground. I say this not about illegitimate dissent from traditional teaching, but about legitimate distancing from imprudent demands.”