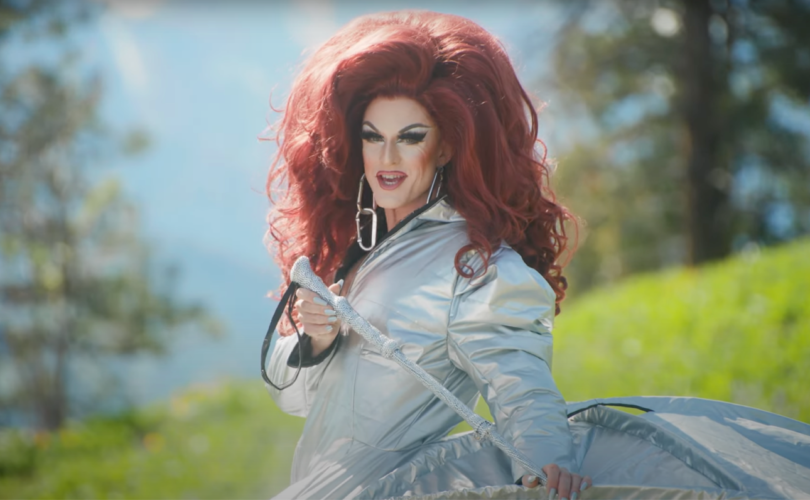 (LifeSiteNews) — In order to get a jump on Pride Month, The North Face — which caters to outdoor recreation enthusiasts — released a video ad featuring a man dressed in drag who announces, “Nature lets you be who you are, even gay.”

“You are cordially invited to the summer of pride with my friends at The North Face,” continues the big-haired drag queen known as “Pattie Gonia,” who advertises his preferred pronouns as “she/they.”

“We’re travelling all the gay across America and everyone’s invited,” he adds. “So put on your boots and come out … side with us.”

While the video ad could be dismissed as nothing more than high-camp entertainment, it promotes a very real The North Face program dubbed the “Summer of Pride” staging outdoor events around the U.S. for LGBTQIA+ identifying people.

— Article continues below Petition —
PETITION CONGRESS: Stop the grooming & sexualization of children in schools
Show Petition Text
6556 have signed the petition.
Let's get to 7500!
Thank you for signing this petition!
Add your signature:
Show Petition Text

Posted Monday on Twitter, the video faced a backlash from the Twitterverse, with much of the disapproval coming from gays who resent being linked to drag queens and from women who see drag queens as nothing more than an insult to all women.

As of this writing, the video has been “ratioed” roughly 16 to 1 on Twitter, garnering 982 mostly negative comments and just 62 “Likes.”

“Everything about this is false and fake – the opposite of nature and ‘being who you are’,” wrote Helen Saxby.

“What on earth has the most artificial characterisation of women got to do with getting outdoors?” asked Saxby.

“Won’t be buying my next pair of hiking boots from a company using an offensive and sexualised parody of womanhood to advertise them,” added Josephine Liptrott.

Won’t be buying my next pair of hiking boots from a company using an offensive and sexualised parody of womanhood to advertise them.

“I’m a gay man and I dislike drag,” reacted Twitter user Duncan. “Can you please not associate drag with pride as if it’s inherent to being gay?”

Hi. I’m a gay man and I dislike drag. Can you please not associate drag with pride as if it’s inherent to being gay?

Also I don’t understand why you hid this message. Are you only interested in responses that applaud your marketing decisions? pic.twitter.com/Ed1h4K0jra

“So you think to be gay means looking like a parody of a woman?” wrote Alisoraus I/me KPSS.  “I think the gay community might be a bit pissed off about that. And it is offensive to women too. Brilliant bit of marketing.”

So you think to be gay means looking like a parody of a woman? I think the gay community might be a bit pissed off about that. And it is offensive to women too. Brilliant bit of marketing.

“It doesn’t look like this is getting the expected results,” noted another Twitter user. “Wonder why? Does your marketing team have any notion of who your market audience is?”

It doesn’t look like this is getting the expected results. Wonder why 🤔? Does your marketing team have any notion of who your market audience is?

“Using gay culture as a marketing tool doesn’t signal what you think it does,” said BrettG.

“Plus nothing says ‘outdoors lifestyle’ like 5lbs of makeup, platform shoes and outfits that [are] as bulky and intricate as parade floats,” added Twitter user Viv.

Plus nothing says “outdoors lifestyle” like 5lbs of makeup, platform shoes and outfits that as as bulky and intricate as parade floats.