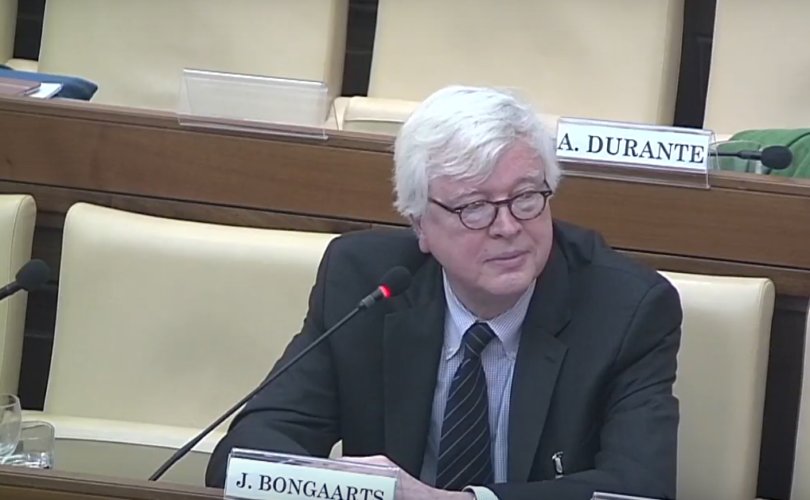 VATICAN, March 3, 2017 (LifeSiteNews) – There is an “unmet need for contraception and family planning” and reducing birth rates would help the environment, a speaker at the Vatican conference Biological Extinction told a room of demographers and a Catholic archbishop.

John Bongaarts, the vice president of the contraception-promoting Population Council, said population growth is for the most part “not a welcome development.”

The “most relevant” part of his presentation on population and fertility trends, Bongaarts said, was about “responsible parenthood.”

“The term 'responsible parenthood' is the term that is widely used in the teachings of the Church and among other things, it means the responsible planning of families,” said Bongaarts. He quoted Pope St. John Paul II's 1994 letter to the United Nations, the final report of the 2015 Synod of Bishops, and Pope Francis.

In his letter, Pope St. John Paul II called for “…securing for husband and wife the liberty to decide responsibly, free from all social and legal coercion, the number and spacing of their births.” It also defined “responsible parenthood” as “the empowerment of couples to use their inviolable liberty wisely and responsibly, taking into account social and demographic realities as well as their own situation and legitimate desires.”

In his slide, Bongaarts didn't include the final part of that quote, which says this must be done “in the light of objective moral criteria.”

The 2015 Synod's final report said “… family planning fittingly takes place as the result of consensual dialogue between the spouses.”

And in 2015, according to Bongaarts, Pope Francis said, “responsible parenthood requires that couples regulate the births of their children.”

“These are powerful statements … that I think we all can agree with,” said Bongaarts. The first principle that these statements embody is “that couples are decision-making unit” when it comes to how many children they want. The second is that “no institution, nobody outside should tell or coerce couples to have either more or less children than they want.”

“And thirdly, couples, in making their decision about family size, should take into account their own needs, but also the needs of society and demographic trends,” said Bongaarts. “So that is a very comprehensive statement crisply stating what I also believe and I think many others do as well.”

Bongaarts said “concern about moral and social acceptability” of contraception is an “obstacle” that “prevent[s] some women from practicing birth control. That has impact on the number of pregnancies that occur.”

“Lack of knowledge of birth control or lack of availability” is another “obstacle,” he said.

The Catechism of the Catholic Church teaches, “every action which, whether in anticipation of the conjugal act, or in its accomplishment, or in the development of its natural consequences, proposes, whether as an end or as a means, to render procreation impossible is intrinsically evil” (CCC 2370).

If married couples have a “grave” reason to delay children, the Church teaches that they may abstain from committing the marital act during the woman's fertile time.

The Catholic Church also teaches, “It is necessary that each and every marriage act remain ordered per se to the procreation of human life” (CCC 2366).

Thus, natural methods of family planning based on fertility awareness do not necessarily go against Church teaching.

Despite saying that no one should force couples to have fewer children, Bongaarts proceeded to outline some of the benefits “from reduced unintended fertility, or eh, any decline in fertility.”

“One effect of course is reduction in the size of growth rate of the population,” he said. But “it turns out there are many other benefits, particularly the benefits of women’s empowerment, for health, for the government, for the economy, for the environment, and for social and political stability.”

Giving women “control over their fertility” is empowering because it “means they have the freedom to determine the number and spacing of children. And they can – they have more chances of participating in the formal labor force. In high fertility countries, women spend most of their lives taking care of children. Once fertility declines, women have more time to earn a living outside the household.”

In his 1891 encyclical Rerum Novarum, Pope Leo XIII suggested a just wage means one that is “sufficient to enable [a man] comfortably to support himself, his wife, and his children” (46).

Experience confirms that there must be a social re-evaluation of the mother's role, of the toil connected with it, and of the need that children have for care, love and affection in order that they may develop into responsible, morally and religiously mature and psychologically stable persons. It will redound to the credit of society to make it possible for a mother-without inhibiting her freedom, without psychological or practical discrimination, and without penalizing her as compared with other women-to devote herself to taking care of her children and educating them in accordance with their needs, which vary with age. Having to abandon these tasks in order to take up paid work outside the home is wrong from the point of view of the good of society and of the family when it contradicts or hinders these primary goals of the mission of a mother…

…It is a fact that in many societies women work in nearly every sector of life. But it is fitting that they should be able to fulfil their tasks in accordance with their own nature … The true advancement of women requires that labour should be structured in such a way that women do not have to pay for their advancement by abandoning what is specific to them and at the expense of the family, in which women as mothers have an irreplaceable role.

'Assisting couples to achieve their reproductive preferences' is 'compassionate,' will help the 'natural environment'

“Health: every pregnancy is associated with a risk of death and poor health,” Bongaarts continued. “So reduced fertility brings about reduced maternal mortality, improved infant and child mortality – uh, health – and fewer abortions.”

The environment would benefit from fewer people because there would be “reduced pressure on the natural resources – water soil, forest, agriculture, energy,” he said. There would also be “reduced air and water and soil pollution.”

“With lower birth rates you have lower growth of the youth population and lower unemployment,” said Bongaarts. “In many poor countries, there [are] very large numbers of young people who cannot find jobs. The unemployed. Males who are unhappy and unemployed are a recipe for trouble.”

Maternal deaths and abortions “could be averted if women had full control of their reproductive patterns,” said Bongaarts.

According to Bongaarts, a decline in fertility means “better schools” and “the rise in the women’s formal labor force participation.”

He praised the United Nations' Sustainable Development goals, which aim to, “by 2030, ensure universal access to sexual and reproductive health-care services, including for family planning…”

“This is [an] internationally accepted goal,” said Bongaarts.

“My conclusion then is that assisting couples to achieve their reproductive preferences is a compassionate act that promotes responsible parenthood,” Bongaarts finished. “It improves the lives of women, their children, and their community – especially among the poor and the most vulnerable. It enhances prospects for poverty reduction…and it moderates the harmful effect of human activities on the natural environment.”

Experts with Catholic views 'were not invited'

“This is what you get if you invite secular humanists to speak at a Catholic conference,” Steve Mosher, president of the Population Research Institute, told LifeSiteNews.

“I have news for people that the women in third world countries are not rioting on the docks,” said Mosher. “They’re not rioting at the airport when their latest load of contraceptives arrives from the United States or from the United Nation Population Fund. There are food riots in South Sudan, as food is being handed out, but there are no riots on the docks when the ships pull in with the [shipments of] contraceptives.”

Mosher called the promotion of contraception in the developing world “culturally imperialistic” and “arrogant.”

These programs “violate women’s expressed needs for different kinds of healthcare,” said Mosher. He said PRI has done surveys in Sierra Leone, Ghana, and Kenya that show women place a low priority on receiving contraceptives but a high priority on things like primary care.

“I would have [been] delighted at the opportunity to debate at this forum in the Vatican, but I, and people with views like mine – which are to say, Catholic views, Trinitarian views – were not invited and I find that staggering,” Mosher told LifeSiteNews.